On the Path towards State Building in Lebanon

Session I: The Weakness of Security in Iraq

President of the Third Way Institute

Professor of the Mohammed V University

Professor of the Mohammed V University

Treasurer of The Lebanese Transparency

Professor of the Institute of Social Sciences

Professor of the Institute of Social Sciences

Treasurer of The Lebanese Transparency

President of the Third Way Institute

Session V: State Failure as a Security Challenge on the National and Global Level

of the German Federal Armed Forces

Deputy Director of the Lebanese Center for

Resident Representative of the Konrad-

Since the emergence of the failed states

concept in the 1990s the subject of failing

states has gained in importance.

of sovereign statehood or show

deficits in the ambit of security and welfare.

failed states have reached the stage of inability

to perform nation state tasks such as

freedoms and property and the exercise of

power. This model of failed states is applicable

in the Arab World where it helps understanding

conflicts as in Yemen to explain

why states decay and which effects this has

During the roundtable discussions on February

the science, economic and political sector

shed light on experiences of Lebanon and

state building process. They discussed the

reasons and possible means and measures

of state failure and building exemplifying

the cases of Lebanon, Yemen, Morocco and

Iraq. In this context they also focused on

the definition of weak, failed and collapsed

states to give an overall idea of the different

aspects of the failed states theory.

The nature of state failure varies from place

failure or collapse depends on a nation's

circumstances. In a collapsed state the

political and public order has broken down

whereas the leadership in a failed state remains

in power due to its control of the coercive

The roundtable discussions witnessed the

speakers from Jordan, Morocco, Yemen and

Lebanon. Each speaker presented a working

paper describing the situation in their countries.

In addition Dr. Masala presented an

analysis from the perspective of international

the Konrad-Adenauer-Stiftung opened the

highlighted the two main features which

characterize state failure, i.e. the loss of the

legitimate use of physical power over its

territory and the inability of the state to

studies on failed states are in this

context useful to elucidate the causes and

Dr. Qatarneh gave a speech on the local

community situation in Iraq. He focused on

how to rebuild Iraq through increasing security

and stability underlined the importance

of setting a fair allocation system of oil resources

among different communities and

regions. According to Dr. Qatarneh Iraq

has failed to develop sustainable strategies

to deal with existent threats to the political

community such as the ethno-sectarian

conflicts. He then emphasized that though

the new government in Iraq grants a wide

array of political liberties, it is still unable to

offer a security structure to allow the citizen

to practice these liberties. Moreover, the

or local militias that seek to undermine

the democratization process in

Dr. Qatarneh concluded that Iraq can only

resolve its state building dilemma through a

national reconciliation initiative that would

bring in all Iraq’s ethno-sectarian parties to

the paper of Dr. Qatarneh with the

audience and came to the conclusion that

that Iraq, despite all the challenges it is currently

facing it still presents some positive

aspects such as the substantive improvement

in the security situation. Dr. Esslimi

considered at the end that it is impossible to

build a state under the occupation situation

Yemen’s case by presenting a paper on

widespread corruption in Yemen. He considered

Yemen a failed state because of tribal

political system which leads to the emergence

of conflicting sects and the destabilization

of the political order.

to take measures in order to found

of the rent seeking concept in connection

with the failed states theory. He argued that

it is difficult to have a discussion on failed

states while at the same time avoid delving

into the theoretical concept of the state.

and accelerates the polarization of the society.

Therefore one can define corruption as

a primitive version of rent-seeking. In this

context rent-seeking is understood as a different

source of income when the state restricts

the operations of the market and

creates different forms of rents over which

people start to compete. This competition

can be either legal by lobbying or illegal

in Morocco. He explained that the

Moroccan political system is undergoing, for

the past ten years, a great development

and that the country has witnessed several

patterns of progress. Though Morocco is currently trying to dismantle some aspects

of the old conservative tradition in various

spheres, such as the family code and the

freedom of expression, it appears that the

aim of the reform projects is still not clear

facing difficulties at the institutional level

and at the level of wealth distribution capabilities.

by Dr. Esslimi. He then debated some

questions on combating corruption, the

regulations governing human organs in the

the independence and transparency of

the judiciary and the role of civil society in

he answered to questions that were raised

by the audience with regards to the possibility

of democratization of the Moroccan

tackled the situation of Lebanon as a

case of State failure in various aspects, including

failure of the security sector, widespread

corruption and shortcomings of the

of Lebanon’s formation, its independence

and the civil war. He stated that the

existence of multiple religious groups such

as Islam and Christianity as well as the existence

of many political parties and the existence

of discrimination among them cause

the division of Lebanon into conflicting

groups. He pointed also out to the external

factors as foreign interference that affects

the stability of the country.

The paper of Dr. Eshtay was discussed by

that the Lebanese should act more

future-oriented and should be less affected

Dr. Qatarneh highlighted then the concept

of threat perception and stated that Arab

countries should identify the sources of

threat in order to enhance the state building

state failure as a security challenge on the

national and global level. He said that in the

light of the 9/11 attacks state failure and

failed states are considered the breeding

ground for violent extremism and extremist

groups. Hence the political and academic

interest in the concept of state failure

should focus more intensively on the reasons

and impacts of collapsing political systems

and examine the possibilities to preventing

states from failing. He also stated

that special attention has been generated to

countries are already classified as

failed states and 96 states are on their way

to fail. Dr. Malasa stated that the Index

and its classification of failed states or

states in the process of failing is so broad

that it includes every type of failure, ranging

from states where the central government

is unable to maintain the monopoly on

the use of force to countries where governments

have no budget to keep infrastructure

running. Such a broad range of state

failure definition is problematic for research

purposes. He suggested using instead the

territory and state authority – according to

the international law. If governments are

not able to exert their authority over their

populations within the boundaries of their

territories they are indeed in the process of

Over 40 high ranking participants including

employees from public and private sectors,

the roundtable discussion. The participants

helped creating a spirit of interaction and a

meaningful dialogue. The participants were

engaged actively in the discussions due to

their diverse cultural and ideological background.

The conference outcome was highly

important because of the excellent contribution

of the different speakers. Many participants

and LCPS. Thanks to the comparative approach

the experts could promote a better

understanding of the failed state and state

building concepts. The comparison of the

the state failure process in the countries

such as Lebanon and Yemen. The event

provided the participants with a qualified 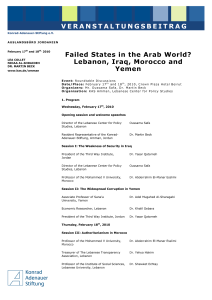