and Ministry of Social Development Employees

In cooperation with the Ministry of Social Development and in partnership with the Visions Center for Strategic Studies, KAS Amman organized a one-day training workshop on Good Governance in Aqaba. The objective was twofold: Provide guidelines and general principles of governance to these organizations, and open dialogue between members of CSOs and the Ministry of Social Development.
April 27, 2012 Ordering Information

Good Governance and Management of Charities

The Role of Charities in Local Development

Head of Planning and Studies Unit

Civil society organizations are at the forefront of reform in the Middle Eastern states affected by the Arab Spring. In Jordan, the government has begun to restructure by promoting decentralization – causing an advent of new NGOs and CSOs. There are now 1197 national civil society organizations registered with the Ministry of Social Development alone; half of which are registered in the South, in addition to the several thousand other organizations within the country. Most are engaged in local development, fighting poverty, or political activism. But the majority of these organizations lack financial capacity and governance standards. They frequently operate at the behest of donors, with undefined strategies. While governance problems are paramount, there is no mistaking the well-intentioned nature of these organizations – as volunteerism is the driving force behind most of their work. These volunteers, however, also lack adequate training; often put in charge of operations they are ill-equipped for. Quality of governance is decisive in how effective and sustainable an organization is. Many of the newly-founded CSOs lack the tools needed to be sustainable.

In cooperation with the Ministry of Social Development and in partnership with the Visions Center for Strategic Studies, KAS Amman organized the one-day training workshop on governance in Aqaba. The objective was twofold: Provide guidelines and general principles of governance to these organizations, and open dialogue between members of CSOs and the Ministry of Social Development. Presently, CSOs, particularly in the South, feel as though they have very little access to the Ministry— thus the training workshop aimed to bridge that gap. At times there was contentious debate amongst the CSO representatives, fostering an environment to address grievances and solve problems.

Dr. Khaled Awamleh began by outlining the topics of the workshop: Administrative and financial record keeping, proposal and report writing, awareness of legislation pertaining to CSOs, and methodology of good governance. He stated the importance of creating a mission plan for fieldwork while maintaining flexibility in the context of the changing political and social landscape.

Dr. Martin Beck spoke on the subject of good governance by stressing the importance of integrity. Social development requires the individual to adapt to ever-changing political challenges, while operating with constant awareness of their personal values. Integrity transcends cultural and national identities and should be the priority of all successful organizations. Dr. Beck concluded by identifying existing political structures as the causal factor which prohibits individuals from acting with integrity. Creating a framework which enables people to work hard and be accountable is integral to development.

Dr. Ibrahim Al Tamimi welcomed participants with greetings from the Ministry of Social Development and Minister HE Ms. Nisreen Barakat. He expressed the Ministry’s strong desire to help develop CSOs in order for them to be self-sustainging. He then thanked Konrad Adenauer Stiftung and Visions Center for organizing the event, reaching out to Jordan’s southern governorates.

Ahlam Al-Nasser led the workshop by stating there are over 5000 CSOs in Jordan, yet in 2011 their economic contribution was minimal to GDP. Ms. Al Nasser attributed this problem to financial mismanagement and poor governance. CSOs cannot be partners to development when they seek financial support without contributing substantially to the economy. Good governance is the mechanism through which successful decisions are implemented and monitored; it guarantees transparency and integrity. While voluntary work and public service are the main driving forces, management and planning lack focus. She noted that pillars of effective communication and standards are fundamental to sound administration. The participants were then separated into groups and discussed different governance topics amongst each other, then provided:

Administrative Evaluation: Periodical performance assessments of organizations’ management and employees is needed. Participants stated that although these organizations begin as voluntary projects, members begin to pursue their own self-interests rather than that of the organization. Because volunteers are not accountable to the Jordanian General Assembly, planning is sub-standard and performance suffers.

Election Committees: Participants stated the need to define administrative bodies within organizations. They suggested having elections and auditing committees to enforce the results and terms of elections. It will incentivize performance because administrators can be voted out if they do not execute their role well.

Job Title Definition: One problem is with people who leave organizations because they see no objectives or their roles are not clearly defined. To address this, they recommended clarification via letters of objectives for the administration.

Strategic Planning: Traditionally, donor support determines priorities, which should not be the case. Rather, priorities must be set and then funding should be acquired. While stakeholders must be considered, financiers and donors must understand the mission statement of an organization before supporting it, preventing any conflict of interest.

Goal Identification: Organizations which have good governance set one or two goals and make a specific timeframe to achieve them. Associations should be licensed by the MoSD for one or two goals; oversight of the timeline, target goals, projected results and indicators must take place before the license is issued.

Ms. Nasser recommended establishing centers for governance similar to ones in the West, the United Arab Emirates, and Egypt. Volunteerism is the basis of most CSO work; they are frequently the most well-intentioned employees. But poor administration leads to conflict of interests –with procurements going to the benefit of the board of directors. If these organizations cannot fight corruption, she said, do not expect democracy. Initiative starts with the individual, with that, others will follow. Proper planning and marketing will convince regional donors to support projects which demonstrate clear objectives.

The discussion session that followed was contentious and productive.

One participant pointed out that poverty is disproportionately high in the South compared to the other parts of the country – with unemployment as high as 60% in some cities and communities. Another participant stressed the need for more funding, citing the expectation of volunteerism by many political organizations.

To the many arguments against current government policy, one participant said blaming the Ministry of Social Development will only lead the Ministry to lose confidence in the capabilities of the accusing organizations. The participant argued that even the capital, Amman has poverty like other parts of the country, yet when problems arise the Ministry should be approached directly with proposed solutions.

Dr. Tamimi from the Ministry responded by stating that the role of the Ministry is to partner with CSOs. The Ministry uses its budget to work with them, but there must be contribution and reciprocity of effort by the recipients. He said that 700 new organizations registered with the Ministry in 2011; yet only 5 million JOD (approximately 7.1 million USD) was available to support them. Furthermore a large percentage of funds are already allocated for organizations that help the disabled. Financial shortfalls in Jordan makes development difficult: foreign funds make up 11.7% of the contributions to CSOs; and 40% of resources come from local philanthropists and the private sector.

Dr. Khaled Awamleh suggested to the CSO representatives that they rely not solely on the government for support. He stressed utilizing volunteerism, and that, if its importance cannot be communicated to their communities, then the CSOs would be demonstrating ineffectiveness.

Marina Henatie provided a brief history of CSOs in the Middle East. Created as humanitarian organizations by the West to fight despotic governments in the 1980s-1990s, CSOs supplement the state in meeting the needs of the people. In theory, volunteers come together to provide social and political services through scientific methods – finding appropriate solutions for the community they serve. Ms. Henatie asserted that social policy is designed by specialists. Without adhering to the scientific methods previously established, it is impossible to sustain quality work. She outlined the process into five steps:

Exploratory Period: Analysis of economic, social, educational, and cultural climate. This is the only way to improve quality of life without imposing plans which are considerably culturally insensitive. This requires communication with the local community to establish understanding.

Situation Analysis: Using questionnaires and other methods of assessment is integral to diagnosing the problems in the community. If they misdiagnose the problem then all subsequent projects and activities will not net the desired results. Failure to diagnose the situation accurately will lead to a waste of money and resources.

Identify Indicators: Determine what the benchmarks for success are. Categorize a group of solutions to the problem and prioritize solutions based on cost efficiency.

Planning Phase: After all research and analysis has been conducted, a plan must be made to implement change. This can be in coordination with the Ministry of Social Development, other CSOs or independently.

Implementation: Execute plan according to the processes determined in the planning phase.

Development without these methods is haphazard. It is unsustainable and will not produce long-term results. Research and the foundations for development work are proven and can be replicated. Self assessment through daily, weekly, and monthly reports helps to identify problems or weaknesses within the organization. Ms. Henatie concluded that one of the most important aspects of CSO work is motivation from the bottom to the top of the organization, not a top-down approach.

The discussion session provided valuable insight to how NGO’s in the South perceive Amman’s assistance to them.

One participant stated that the Ministry claimed to be over - loaded with the registration of new NGOs; but as long as people are working there should be no opposition to their registration. The participant suggested forming a coalition of NGOs in the South within a reasonable timeframe. Another participant said that the impact of training is weak and many NGOs are still ineffective thus the need for better training using a comprehensive approach should be implemented.

Political reformation is noticeably occurring in Jordan through the principle of subsidiartiy. Beginning at the smallest level, citizens are actively participating in changing the political landscape. Jordanians have taken the lessons of the Arab Spring to heart, not through violent revolution, but through the application of human capital. While previously, many felt that the Ministry of Social Development was inaccessible to them, they now feel their words were heard, and that their plight is better understood. This workshop was an opportunity for CSO directors in the South to address their misgivings and misunderstandings with the MoSD in an environment conducive to their mutual benefit.

Konrad Adenauer Stiftung and the Visions Center will continue to enable direct dialogue between government and citizens. It is in the interest of Jordan and the region’s stability to promote the trend of grassroot development. Project management, proposal and report writing, financial planning, and governance standards are only part of what makes for successful reform. Without them however, CSOs may inadvertently inhibit progress. The Ministry of Social Development representatives addressed the concerns of the CSOs respectfully and openly. All participants were awarded certification for participation in the training workshop. The recommendations made by the trainers and participants provided a basic framework for governance standards of civil society organizations. 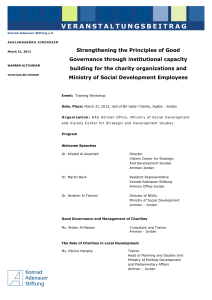