Violence at Jordanian universities is a result of unresolved tensions not only at the university level, but also at the social and political level. The underlying factors behind its appearance are deepening and its implications vary. In this context, KAS Amman and Scoopat organized a workshop entitled “Violence at Jordanian Universities,” with representatives from universities, civil society, media, and the political sphere to identify the reason and discuss possible solutions.
December 1, 2013 Ordering Information

Ministry of Political and Parliamentary Affairs

Session 1: The Role of the Jordanian Parliament in Reducing University Violence

University of Science and Technology

Session 3: The Educational Role of the Family in Reducing University Violence

Director of a Public School

Session 4: The Role of Media and its Influence on University Violence

Violence at Jordanian universities is – to a large extent – a result of unresolved tensions at the university level as well as at the social and political level. The underlying factors behind its appearance are deepening and its implications vary.

In order to identify its reasons and causes, KAS Amman and Scoopat organized a workshop entitled “Violence at Jordanian Universities,” which brought political decision-makers, various civil-society institutions, university and media representatives as well as student unions together.

Mr. Maher Madieh, Director of First Media Company (Scoopat), opened the workshop by saying that until recently, violence at university campuses used to be a rare occurrence. Nowadays, however, it has almost become a daily event. Therefore, the Ministry of Higher Education, university representatives, professors and administrative staff, student representatives as well as civil society representatives have to come together to discuss and develop an action plan to react to these problems.

Ms. Nidaa al Shraideh, Project Manager at KAS Amman, stated that violence at university campuses in Jordan threatens the country's ambition to build a solid system of higher education. The violence has escalated from verbal to physical violence and even ended in death. In order to solve this accumulating problem the issue has to be discussed, reasons have to be identified, and ways of intervention and solution have to be developed and implemented on the ground.

H.E. Mr. Rami Al-Wreikat, H.E. Mr. Jamil al Nimri, H.E. Dr. Hameed Al Bataineh, Dr. Majeda Al Sarairah, Mr. Nader Khatatbeh, discussed an agrred that violence at Jordanian universities reflects a combination of political, social, and economic factors and developments affecting Jordan in the last years. The violence threatens not only the reputation of the educational institutions, its innovation and achievements locally and regionally but also the image of the country. Thousands of Arab and international students enroll in Jordanian universities every year due to its scientific reputation. However, a high number of students has already begun to orient themselves towards universities outside Jordan – a serious concern for the universities but also the country’s budget.

Politically, it has been emphasized that it should not be separated between the university environment and the community. While university students are often expected to be more educated with regard to knowledge and culture recent happenings question this assumption.

H.E. Mr. Jamil El Nimri and Mr. Nader Khatatbeh gave a short summary of the history of violence at Jordanian universities by stating that it is not a new phenomenon but that the causes differed in the past and the magnitude changed. In the 1980s, it were mainly political ideas that led to marches inside the universities (left, national, Islamic etc). In the 1990s, reasons for violence at universities were rather sectarian. Ever since then, it became clear that violence at universities should not be separated from developments within the society. According to scientific studies, committees etc., violence increased, especially at public universities, due to a change of social values, deteriorating living standards, political repression, and an allegiance to tribes.

It was added that in the context of a developing Jordanian economy and society, an increasing gap between rich and poor, and the lack of strong institutions, the meaning of tribalism grew once again. Consequently, violence at university campuses should be seen as a reflection of social resentment. El Nimri explained that, violence and chaos has also erupted in the headquarters of the Jordanian parliament, reaching unprecedented levels in recent weeks and days. The participants of such arguments are not protesters but elected officials. This wave of ‘parliamentary violence’ shocked all Jordanians and questions the effectiveness of the House of Representatives. However, the incident pushed the parliament to take a decisive measure and to eliminate respective parliamentarians who caused the problem. In light of this vital step, it has been assumed that a positive role could be carried out by the House of Representatives together with the Ministry of Higher Education to eliminate violence at universities by reforming higher education, updating the university environment and curricula. Additionally the basis on which the academic staff is chosen has to be changed, away from nepotism; increasing economic support to universities and granting bigger academic freedom; as well as reconsidering military service which could have a positive effect on their personal development with regard to discipline. Here, those that are unable to complete their academic education should be promoted to accomplish vocational training during their military service.

Khatabeh spoke about the way media has dealt with violence over the years. Newspapers covered the incidents in very similar ways by reporting what the government or university officials declared, without investigating the real causes of such violence. At the same time, he criticized that some media outlets exaggerated tribal violence and ‘lavish’ the public with headlines and articles that stir emotions in a very negative way, without looking deeper into the problem.

According to all speakers, two further causes, additional to the economic and social causes, of violence at universities are as followed:

Social: a lack of moral values due to missing social education by parents or at school; a society with a rather high acceptance of violations of public law; disintegration; a patriarchic society; disrespect for the rule of law; inadequate socialization; misconception of dignity among students; a clash of modern and conservative ideas, especially with regard to the relation between men and women.

Academic: questionable admission policies also know as ‘makarim’ – meaning that those with much lower academic preparation are often admitted to national universities; tribal rivalries which are exacerbated by tribal influence in national admission policies as well as in university-based administrative decisions; outdated curricula and teaching methods; lack of discipline within the university; lack of consequences in case of violence; weakness of university security guards and the inexperience of student affairs’ staff; dishonest competition on some high ranking management positions within universities; decline of good governance at the university departments; lack of proper regulations guiding student behavior inside universities; absence of faculty mentoring to students; lack of free development of the individual on campus, especially with regard to elections and the organization of groups and activities.

At the end of the workshop, the participants summarized fundamental recommendations on how to tackle the problem of university violence:

Reinforcing the rule of law in a firm, courageous and transparent way without leniency or favouritism; increasing sanctions against students engaging in violence; implement appropriate and possible solutions to eliminate the core sources of the university violence; setting appropriate professional and psychological guiding programs to help reduce university violence; requiring identification cards to enter campus; installing security cameras; training for security guards on how to control fights; increase training for staff members; engaging students in open dialogues between the departments and improve students’ interactions with each other; increase extracurricular activities; rethinking the selection procedures of students.

Mr. Wreikat ended the workshop by calling for a national strategy to tackle the problem as violence at universities is not only affecting the students but all Jordanians. A code of ethics should be established to protect the universities from violence which leads to the destruction of public property and spreads instability in the country. 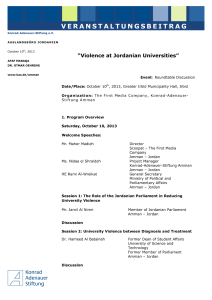