Award for Mr. Denis Schrey by the Kingdom of Cambodia

On 10th February 2016, former KAS Country Representative for Cambodia, Mr. Denis Schrey, has been awarded with the Royal Order of Sahametrei, at the level of “Mohasena” (meaning “grant officer”) by Samdech Heng Samrin, President of the National Assembly of the Kingdom of Cambodia.
March 11, 2016 Ordering Information

“Sahametrei”, meaning “joint cooperation”, is a royal order conferred by the Cambodian Government and given to foreigners who have distinguished themselves in providing services to the Cambodian nation, particularly in terms of foreign relations and diplomatic activities. It represents deep respect and appreciation by the Kingdom for those who have been granted the award.

Mr. Schrey has served the Kingdom of Cambodia as KAS Country Representative for 4.5 years, until January 2016. During his term, Mr. Schrey has contributed significantly to the political development of Cambodia in the fields of rule of law, democracy and human rights, and more specifically in terms of political party and parliamentary reform. Not only is he a well-respected personality among high-ranking Cambodian officials but also among the Cambodian youth, national and international cooperation partners and his KAS team. 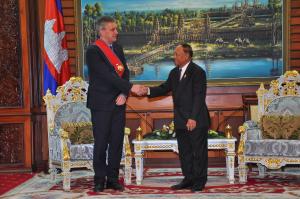