by Dr. Raimund Weiß, Robert Hör
'Shaping the Future of German-Cambodian Relations' is the second publication of KAS Cambodia on the relationship between Germany and Cambodia. With this second version, the publication brings various discussions on political, economic, and socio-cultural relations of the two countries, while looking forward to stronger relations and a lighter future between the two with critical policy recommendations. Subscribe to the publication for detailed content.
January 18, 2021 Ordering Information

Cambodian and German stakeholders overall rated German-Cambodian relations to be balanced, perceived them as generally positive, and to have development potential on the political, economic and cultural levels, even though the political level is perceived as the most challenging. The cooperative development partnership continues to be a solid foundation to further enhance relations.

German and Cambodian stakeholders share interests and values to deepen economic and socio-cultural relations; but some differ in their perceptions as to the development potential of political relations, particularly when it comes to Cambodia’s democratization process.

Germany and Cambodia share common values and a political vision for international politics: Both are committed to a rules-based international order, multilateralism, and ASEAN integration. That common interest and vision could be a means to improve political relations.

German and Cambodian stakeholders perceive a strong developmental potential in economic relations but there is some scepticism on the German side whether this can be achieved because of three main limiting factors: The Cambodian market size, available human resources and a lack of infrastructure. Hence, economic relations still lack investments and are mainly focused on trade relations. However, this could change in the future as more German initiatives are made to enhance economic relations. Cambodians appear to like German products and there exists a strong demand for German technology and knowledge transfer. 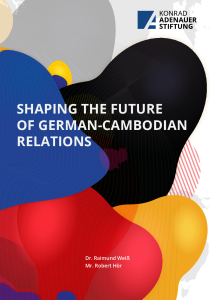