Female journalists play a crucial in bringing forth underreported stories in society. Most of the time, they present out-of-the-box perspectives and angles into a number of important stories that their male colleagues often miss out on and empower other women’s voices to speak up about their concerns.
May 3, 2021 Ordering Information 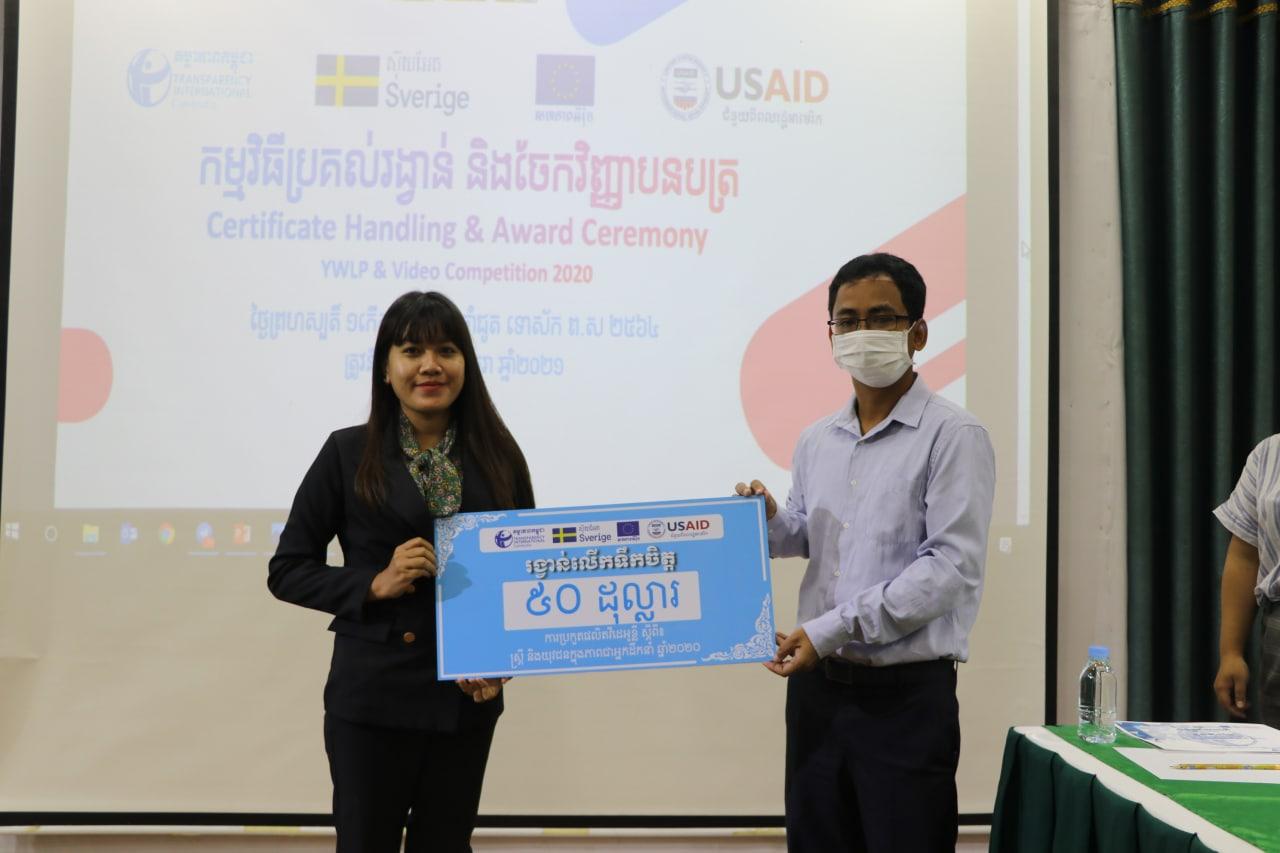 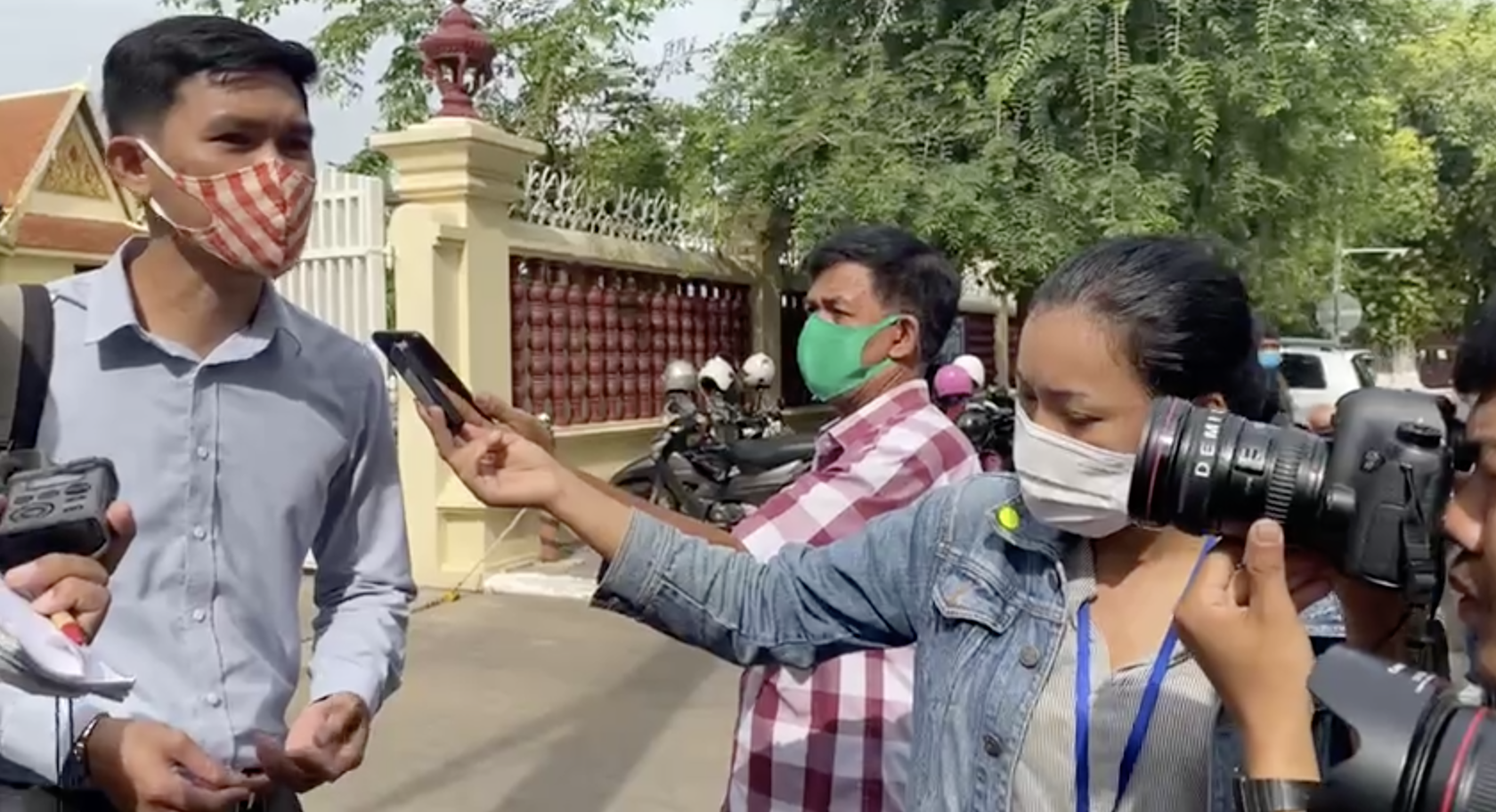 Among her male colleagues, Khan Leakhena tried to seek in interviewing her source.

Nov Povleakhena and her energetic team at FOUCS - Ready for Tomorrow. 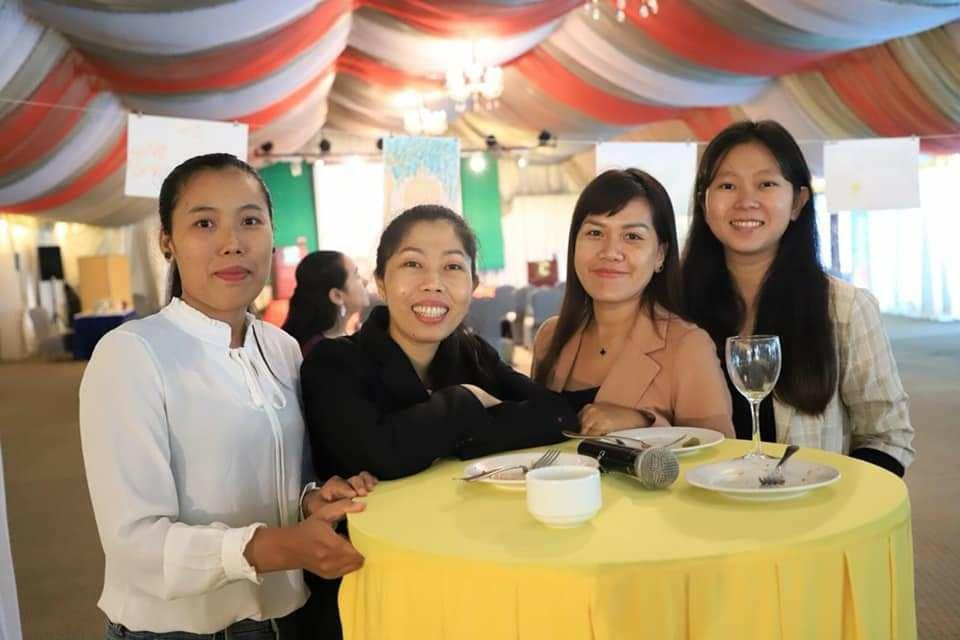 Khan Leakhena (left) and (third from the left) Sorn Sokkheang attended a workshop on Female Journalist organized by CamboJA. 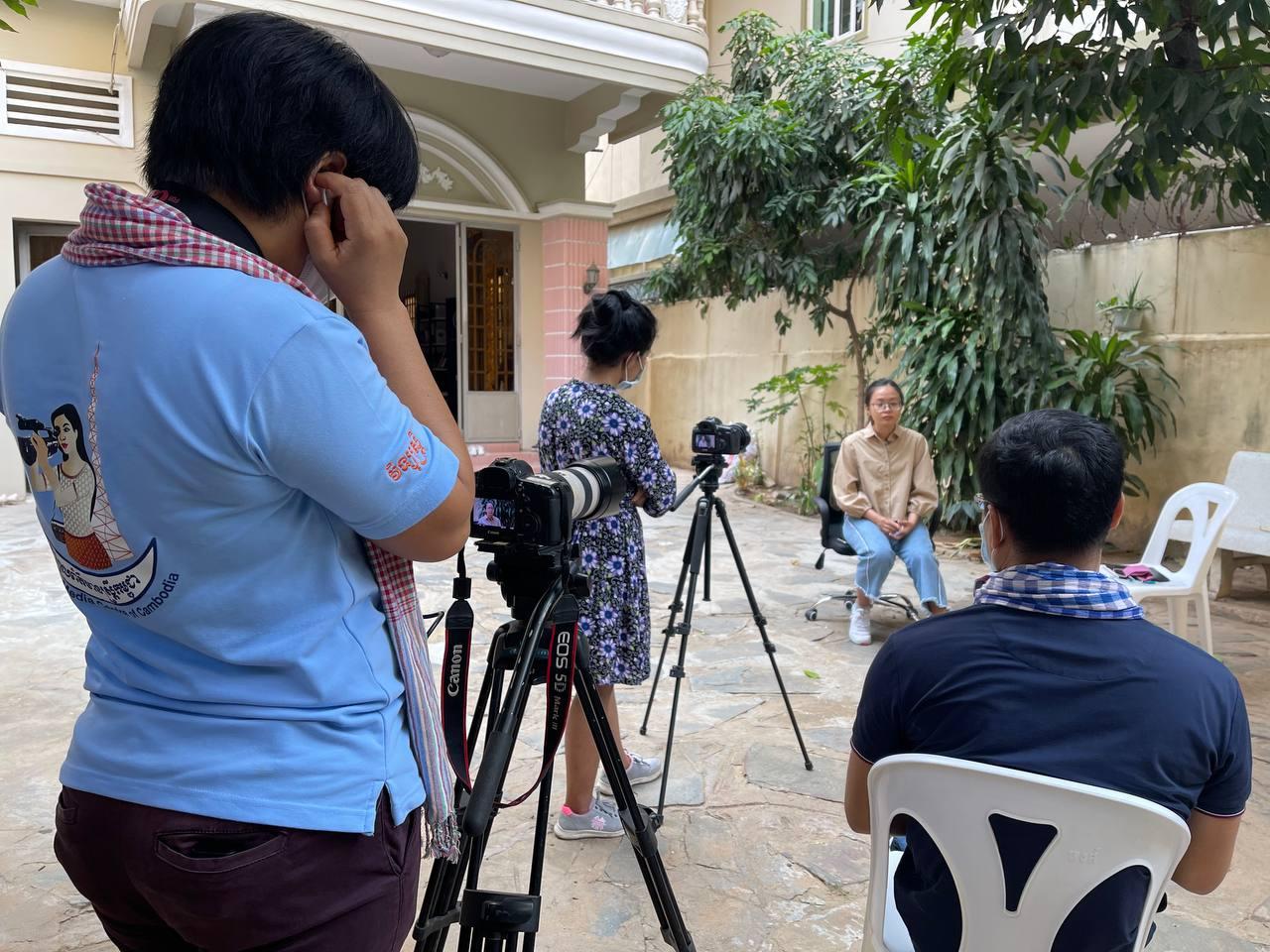 Media team was interviewing Nov Povleakhena (Behind the scenes). 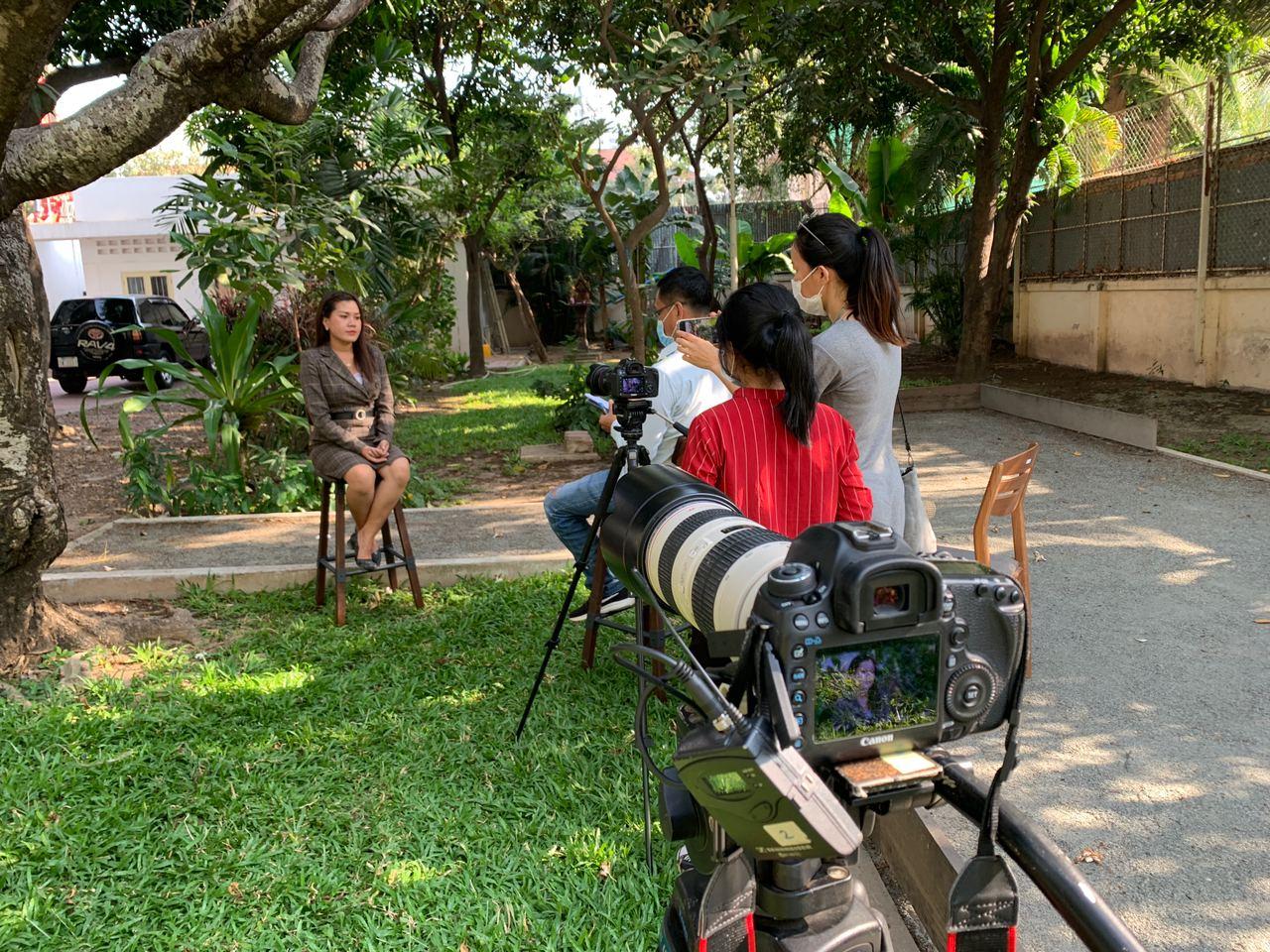 Media team was interviewing Sok Sokkheang (Behind the scenes).

To celebrate International Women’s Day, CamboJA, and KAS Cambodia produced inspiring videos of Cambodian female journalists under a project called “Women in Journalism”. These videos portray four female journalists, who have different backgrounds and experiences, but share the goal to empower other women to participate actively in the media sector.

The first video features Khan Leakhena, one outstanding female reporter at the Cambodia Center for Independent Media (CCIM), who has been working in this field for almost 10 years. Born in a peasant family, the understanding of minority’s voices has become her strength. She dedicates her work to empower the less fortunate and to make those voices heard by the authourities. Her writing has contributed to positive changes in Cambodian society both in short and long term. Leakhena believes that in journalism not only men, but also women can flourish in this sector. Click here to watch the full version of her video.

Being a mother of a six year-old, Sorn Sok Kheang never gives up. She is currently a Video Producer of Aspara Media Service Company. Her child inspired her to become a specialised reporter on women, childrean and youth. Sok Kheang believes that the female participantion in journalism is critical, in order to bring forward new perspectives and rarely-reported stories. To hear more about her story, watch here!

Another inspiring female journalist is Im Rachna – her voice has attracted thousands of listeners’ attention across the country. Because of her great passion and hard work, she has developed from being a reporter to Deputy Editor-in-Chief at Radio France Internationale (RFI) Khmer service, where she is working now. She believes that in journalism it is important to adhere to professional standards and ethics. This functions as a bullet-proof vest that helps journalists avoid problems. Rachna encourages and hopes, in the future, to see more female journalists becoming decision makers at their institutions. Watch her video now!

Last but not least, the fourth inspiring female journalist in this project is Nov Povleakhena, a former student at the Department of Media and Communication (DMC) and currently a lead editor at FOCUS – Ready for Tomorrow. As a change-maker, she believes that everyone matters in the process of newsroom management: from reporter, photojournalist, video journalist to webmaster and other media workers. The newsroom leaders need to embrace changes and new trends in journalism, so that news still matters to audiences and stays relevant. Let’s hear from her.

We hope you enjoy the videos and get inspired. 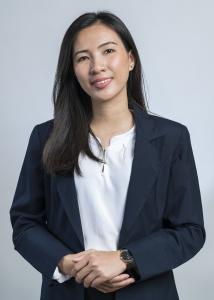 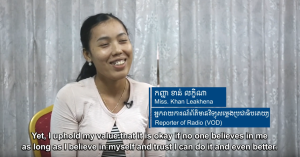 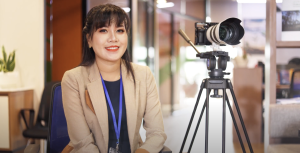 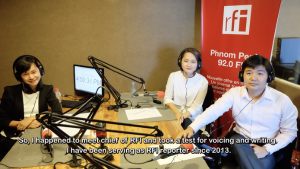