Lebanon is currently suffering from a confluence of deep crises combining economic, banking, financial, social, health crises which have resulted in a complete erosion of public confidence and trust and a meltdown of basic public services. However, the country is presented with an opportunity to build back better. A return to “business as usual” is no longer tolerated.
February 10, 2022 Ordering Information

The country’s power sector has long been at the centre of its economic and fiscal challenges with high generation costs, operational inefficiency and weak governance. It has also been particularly prone to corruption and vested political interests. Since 1992, the share of the electricity sector spending, including subsidies, has accounted for around $40 billion, which is around 40 percent of Lebanon’s government debt.

Lebanon’s reliance on fossil fuels for power generation (heavy fuel oil and diesel oil) means the sector is both a contributor to and a victim of the unfolding economic and financial crises. The dwindling of foreign currencies’ reserves is threatening fuel supply, which has compounded the operational challenges of both Electricité du Liban (EDL) and private generators. Additionally, the Central Bank (Banque du Liban) has been emphasizing its incapacity to provide the required foreign currency for fuel imports, and its intention to revamp this subsidy system to reach those most in need and make better use of its reserves.

Building back better the electricity sector means securing affordable, secure, sustainable, and cleaner energy to the Lebanese people. It also means enacting policy that will reduce the likelihood of future shocks and increase the sector’s resilience to crises. While the sector has been extensively studied and the solutions are widely understood and available, lack of political will for reform has been the key impediment for execution. Nevertheless, reforming the ailing electricity sector has never been more pressing.

With this in mind, Konrad-Adenauer-Stiftung (KAS), Natural Resource Governance Institute (NRGI), and the AUB Issam Fares Institute for Public Policy and International Affairs (IFI) have organized on 21 October 2020 a panel discussion for a strategic vision of Lebanon’s Energy future, with the aim to outline the key problems of the sector, and provide recommendations for priority actions to be taken by the new Government as an immediate crisis management plan within the first 6 months. 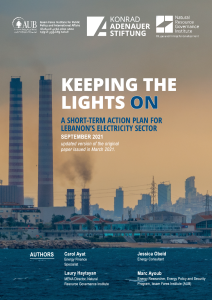