Perceptions and Attitudes of Lebanese Citizens Towards the Economic, Social and Political Situation in Lebanon

A Public Survey with Statistics Lebanon

A national public survey was conducted to study the perceptions and attitudes of Lebanese citizens towards the economic, social and political situation in Lebanon.
February 2, 2022 Ordering Information

Lebanon is currently passing through an unprecedented economic, social, and political crisis. The Lebanese citizens have a pessimistic outlook towards Lebanon’s future and around 40% are considering emigration. Nonetheless, Lebanese still have hope in the upcoming parliamentary election and they believe that it will be a source of change.

The Konrad-Adenauer-Stiftung with statistics Lebanon conducted a national public survey on “Perceptions and Attitudes of Lebanese Citizens Towards the Economic, Social and Political Situation in Lebanon”.

The survey was executed by means of implementing a “door to door” activity using a directive questionnaire according to the probability sampling design.

The n=1,200 survey with Lebanese citizens was a Probability Proportional to Size PPS sample distributed across all the main regions of Lebanon reflecting the population density of the population per region.

For more information, you may read the report of the survey. 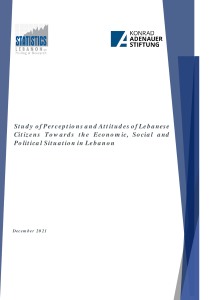