On Thursday, 12.09.2019, the Konrad Adenauer Foundation organized in cooperation with Maison du Futur a simulation workshop in Bikfaya. The topic of the workshop was "Resist, Maneuver, or Concede? Three Paths for Iran Facing U.S. Resolve" and revolved around three potential scenarios in the context of the tensions between Iran and the USA. The aim of this war-game like simulation was to analyse potential dynamics and triggers of each scenario in order to raise awareness for escalating factors.
September 12, 2019 Ordering Information 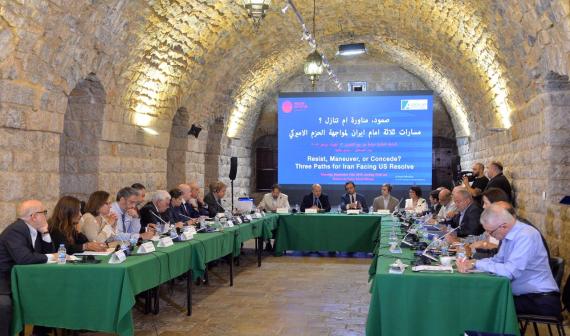 The workshop brought together former government officials, ambassadors and representatives of international organizations, as well as other high-ranking guests and experts from the Middle East, the United States and Europe. Each of the participants took on the role of a major geopolitical stakeholder and thus represented the interests of a specific country or non-state actor. Three scenarios were played through, resulting in a lively round of discussions. The simulation was structured by a moderator.
The first scenario dealt with decreasing maritime security in the Strait of Hormuz and an Iranian attack on a strategic US asset leading to material losses. The participants representing individual regional and international actors took the scenario from there interacting in an exchange of reactions and counter-reactions. In the second scenario, the experts simulated an escalation between Israel and its neighbours Lebanon, Iraq and Syria, observing its implications for US-Iran relations. In this simulation, Israeli Prime Minister Benjamin Netanyahu is pushing brinkmanship to the limit with unmanned aerial vehicle attacks and missiles, while non‐state actors are striking back. The last scenario simulated a breakthrough in diplomacy and the path towards a new agreement between the US and Iran.
The interactive format of a simulation produced new insights and realistic dynamics for each scenario. The players concluded that while a full-scale war seems not very likely at the moment, the relief of tensions or even a new peace agreement seems equally improbable.
At the end of the day, short interviews were conducted with the experts on the topic which are published on KAS’ social media. The event ended with an official dinner.
The KAS would like to thank all participants for their insightful contributions and the interesting debate.