Freedom of expression and transparency in the Arab world

Maison du Futur and the Konrad-Adenauer-Stiftung organized on Friday, February 6, 2015 a one-day seminar for journalists, scholars and media professionals who discussed different panels to the topic of freedom of expression and transparency in the Arab world.
February 6, 2015 Ordering Information

According to Reporters Without Borders 2015 index, all Arab countries – except for Lebanon and Kuwait – were very poorly ranked in terms of press freedom. The reasons pertaining to the low ranking of media in the Arab world can be attributed to many facts, but generally to the states’ control of the broadcasting sector, political pressure – governments, the military or political parties – as well as the unprofessionalism of media organizations and schools.

The Arab Spring opened the public space to the people, mainly to social media and citizen journalists, who used the transformations in the Arab streets to boost freedom of expression and set a new ceiling. However, tight control from state institutions ensued right after new governments took place and the crackdown on bloggers and journalists increased. But a free media is not necessarily a credible media. Freedom of expression is not enough if not accompanied by professional standards, credibility and accountability, in addition to a modern media law that guarantees its freedom and efficiency.

In light thereof, Maison du Futur and the Konrad-Adenauer-Stiftung organized a one-day seminar among journalists, scholars and media professionals. The discussion took place on the Friday, February 6, 2015, and the panels addressed the topic of freedom of expression and transparency in the Arab world’s media institutions.

The Resident Representative of the Konrad-Adenauer-Stiftung in Lebanon, Mr. Peter Rimmele, called the spade a spade during his opening speech in pointing out the various difficulties for independent journalism and the right of a free expression in the Arab world. He also expressed hope, in his preliminary remarks, that the seminar will help to create a deeper awareness for the significance of the freedom of express in the Arab world. Mr. Sam Menassa, head of MDF, emphasized in his opening speech the importance of media for the evolution and development of the Arab world “after the storm.” MDF plans to kick off a comprehensive Marshall Plan for the region, which would address political, social, cultural and economic advancement. All this will be based on good governance initiatives, in addition to educational and economic development plans.

All attendees agreed that without transparency, media is not independent. But what is transparency in media? In the session on Challenges and opportunities of transparency in Arab media, Giselle Khoury – BBC Arabic host – stressed that the Lebanese media law is too outdated and backwards to guarantee journalists’ right to access information. She introduced Pascal Monin, professor and director of the department of media and communications at Saint-Joseph University. Monin said that it is difficult to have transparency in media which functions in a country where transparency is absent on all levels. On the same issue, Abdel-Wahab Badrakhan blamed both media institutions and state authorities for the lack of transparency. According to Badrakhan, without access to information, media institutions and journalists cannot be transparent, and without freedom, transparency cannot be confirmed. Access to information and freedom are two signs of a healthy democracy.

Another issue brought up during the discussion is the issue of self-censorship. Nada Abdel-Samad from BBC Arabia brought up the issue of personal safety - away from laws and regulations. During the same panel. Right after An-Nahar’s Nabil Abou Mounsef emphasized the significance of classical professional standards in journalism, a new panel discussed the relation between social and traditional media. Lebanese blogger Gino Raidy spoke about the high reach of social media in comparison to traditional media. According to Raidy, social media and traditional media should work together and try to complement each other’s work, instead of competing against each other.

Head of the Al-Hayat office in Baghdad, Mushreq Abbas, raised important points to the relation between Arab conflicts and Arab TV Channels. He brought up the role of the reader/receiver of news and how he/she gained more responsibility due to the increase of sources of news and their affiliations. May Chidiac, president of the May Chidiac Foundation, laid the same emphasis on the role of the audience. When transparency and objectivity are absent in the media, the viewer should make extra effort and go out of their comfort zone to try to watch more than one channel – with different agendas and views – in order to understand the story.

It was obvious throughout the conference that the security situation and the permanent state of conflict in the Middle East have a big impact on any discussion on media and transparency. The journalists’ safety often weighs on their decision to be professional, objective or transparent. Therefore, the question that still calls for a more thorough discussion is how to protect journalists from threats on their personal safety. When a journalist feels secure, he/she could be able to focus more on the professional standards of writing or producing news. National security has always been used to justify restrictions on press freedom and basic civil and human rights. In the Arab world, especially after the Arab Spring, people are presented with a choice; freedom or stability, but never both. If you chose freedom at the risk of insecurity – as people or journalists – it means that you are responsible for your own safety.

The Arab world is currently a turbulent place for journalists, but it doesn’t mean that media institutions or journalists should give up to the status co and surrender their integrity and professionalism. That’s why this discussion should definitely continue.

Freedom of expression and transparency in the Arab world 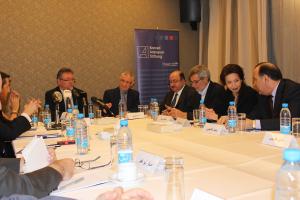 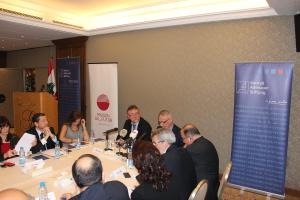 Mr. Sam Menassa, head of MDF, emphasized in his opening speech the importance of media for the evolution and development of the Arab world