by Hendrik Sittig, Darija Fabijanić
Due to its Soviet past, the Russian influence in the Republic of Moldova is still very significant. The country is divided between European integration and Russian convergence. After the government of the pro-European coalition ACUM leaded by Maia Sandu and the pro-Russian Party of Socialists (PSRM) of President Igor Dodon fell apart in November 2019, pro-Russian powers under the leadership of Dodon are expanding its power progressively. This affects the media market, which already has experienced an enormous state concentration under the long-time government of the Democratic Party and its leader Vladimir Plahotniuc.
March 18, 2020 Ordering Information

A central role in the Russian media interference in Moldova plays Igor Chaika, son of the former Russian General Prosecutor Yuri Chaika. He recently acquired 51 percent of the media company “Media Invest Service”. Before that it was owned by businessman Vadim Ciubara. With this Chaika got control over the TV channels “Accent TV” and “Primul in Moldova”, which belong to “Telesistem SRL”, a subsidiary company of “Media Invest Service”. Furthermore, “Telesistem SRL” is managing the Moldovan pages of the websites “mail.ru” and “ok.ru”. This media acquisition is not only useful for Russia, but especially for the Russian-friendly President Dodon which is facing re-election at the end of the year, as Chaika is close to Dodon. As Alexandru Dodon, brother of the President, and Chaika own together a business in Russia – „Industrial Ecological Operator“. Later Alexandru Dodon entered the business of “Arhplei Development“ in Moldova where Chaika shared ownership with Alexandru Ponomariov. However, these aren’t the only business activities Chaika is currently doing, namely he is investing in several sectors in Moldova.

Furthermore, there have been a lot of changes in the recent months regarding the TV channels „Primul in Moldova“ and „Accent TV“ which were acquired by Chaika. “Primul in Moldova” just recently started to function, firstly without a broadcasting licence. However, the licence of “Accent TV“ was used for broadcasting. Later the motion was filed to rename „Accent TV“ into “Primul in Moldova”, as it has received the licence to broadcast the Russian channel “Pervii Kanal”. “Accent TV“ didn’t disappear from the market though. “Telesistem SRL” founded a new TV channel and filed the motion for a broadcasting licence with the old name “Accent TV” with the argument that this is the wish of the audience. Like this “Telesistem SRL” became owner of two TV channels. “Telesistem SRL” was already before Chaikas involvement under Russian influence as it belonged to the Russian company “Volga export” until 2015. It was then sold to Vadim Ciubara for 12 000 RUB (approx. 170 EUR). The price for the deal with Chaika is unknown. But it shows that Russia aims at having more involvement again and direct influence.

Chaika’s activities, however, are not the only ones on the Moldovan media market, as other TV channels are under Russian ownership as well. Thus, for example half of the company “TV Communicatii Group” which owns the channel “RTR Moldova” belongs to the organisation “Rosmediakom” that manages several media. “Rosmediakom” is owned by the Russian media holding “VGTRK” – the All-Russia State Television and Radio Broadcasting Company – which controls the Russian state television and radio channels. The other half of “TV Communicatii Group“ is divided between the “SB Grup Media SRL” and Valentina Stetco. There isn’t much information about Stetco. Some rumours say that she is the sister of the Russian lawyer Anatolii Kucherena who is close to Russian President Vladimir Putin. Kucherena was born in the former Moldovan Soviet Republic and represents as a lawyer a lot of celebrities, e.g. the whistle blower Edward Snowden and former Ukrainian President Viktor Yanukovich. 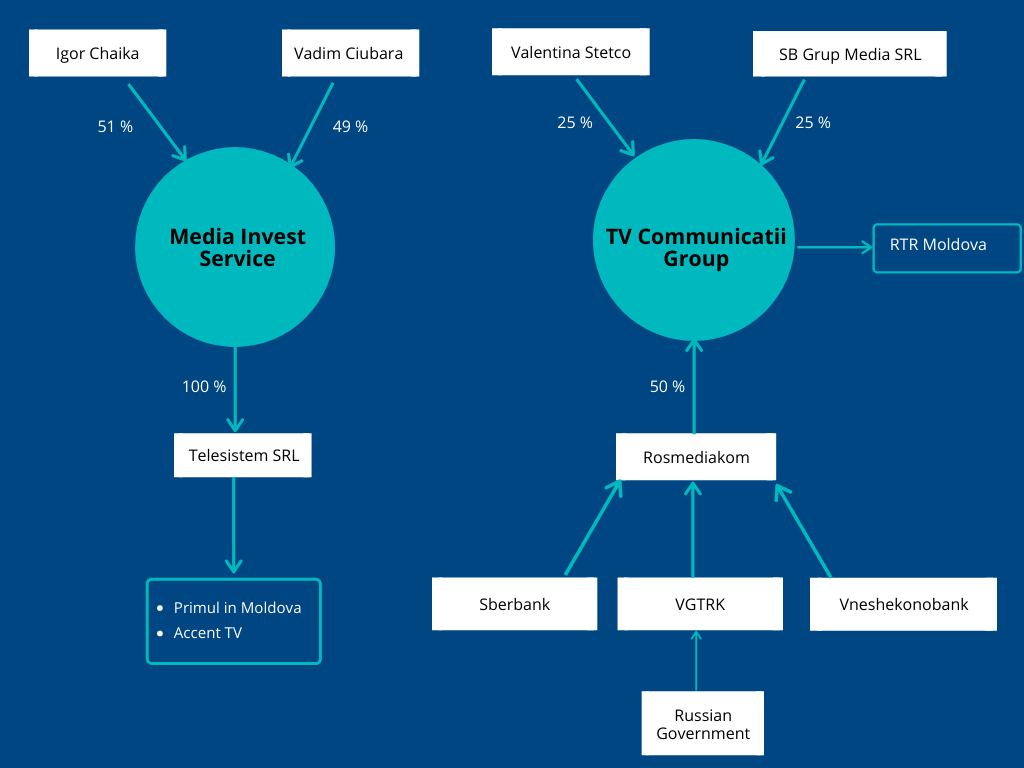 Media-azi.md (2020) Television Stations Rooted Beyond Moldova. The Chaika Case and BC’s Intention to Limit the Equity Participation of Foreigners in Radio and TV

These aren’t the only examples of how media are currently getting more and more under the control of the government. One measure is the amendment to the audio-visual media law which prohibits cable operators to broadcast foreign channels when they broadcast advertisement or tele-shopping. This law came into force in the beginning of the year and consequently 90 TV channels aren’t in the cable programme anymore. Thus, the programme was cut in half. Since a lot of Western independent channels were affected by these changes, many voices can’t be heard anymore by the public and a free opinion-making is almost impossible.

Furthermore, better access was secured for pro-government channels. At 1st March 2020 analogue terrestrial TV signal was stopped and the switch to digital TV happened. The Moldovan Broadcasting Council made a public tender for the last two free spots to be included in the digital Multiplex-A. In the end, the public broadcaster “Moldova 2” and the private channel “NTV Moldova”, which is owned by the PSRM politician Corneliu Furculiță, were chosen. Public service media in Moldova have the reputation to have a pro-government coverage and more than half of the programme of “NTV Moldova” broadcasts Russian productions. Hence, the dominance of the socialistic pro-Russian government is being secured. All these activities are part of broader measures for Russian convergence by the government. Especially the assumption of media ownership is worrying.

In South East Europe, Moldova has a special position with this form of influence. But in other countries in the region the Russian influence should not be underestimated as well. However, it is not happening by direct ownership and restriction of the media market, but more subtly and indirectly. Thus, it can be observed that Russia has the goal of influencing the narrative and the public perception. In the region of South East Europe, Russia has an easy job due to the non-transparent media structures and the existence of only few independent media. Many media outlets just use the narratives and reports of Russian state media like “Sputnik”, “RT” or “Russia Beyond”. 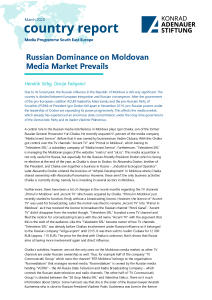