The new book of the KAS Media Programme South East Europe „A Pillar of Democracy on Shaky Ground – Public Service Media in South East Europe“ gives for the first time a complete overview of public service media (PSM) in South East Europe. Media experts from the ten countries that are covered by the Media Programme write about the historical developments, the legal framework, the financing model and organisational structure as well as the digital challenges of the PSM in their country. From Croatia to North Macedonia and from Bulgaria to the Republic of Moldova, liberalised media markets have emerged following the collapse of socialism and its state-run media systems. State broadcasters have become public service media. Nowadays, the legal framework of the public service media provides in most of the countries in South East Europe a good basis for independent, democratising journalistic work. However, what looks good in theory often fails in reality due to unclear structures, political influence, and in many cases government-dependent funding.

Next to individual country chapters in the book there is a recent representative opinion poll commissioned by the KAS Media Programme and conducted by the research institute Ipsos in the ten countries. More than 10.000 people were asked the same questions: How important do people find public service media for the democracy? How much do they trust them? How should PSM be funded and what kind of content should they offer? And do they consider PSM politically independent? In the summarised results for the entire region it is very clear: More than two thirds of respondents say that public service media are important for democracy. In the same time, almost 65 percent see these channels under political influence.


“This discrepancy becomes repeatedly visible and audible at demonstrations in South East Europe, when people take on the streets against their governments. Then usually public service media are also in the focus of protests and have been criticised as mouthpieces of the government”, says Hendrik Sittig, Head of the KAS Media Programme South East Europe. “Freedom of the press and expression are central pillars of democracy. Thereby public service media play a significant role. If they do not exist, one should invent them. They are essential to democracy – if they can act free of political influence and are well funded to fulfil their task”.


The Media Programme wants to give impetus for possible reforms of public service media in South East Europe with the publication of the book and the opinion poll.


The book is available as a free download here.

The book in German is available as a free download here. 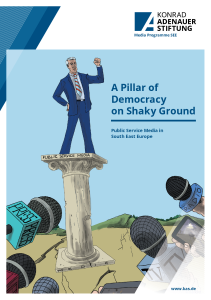 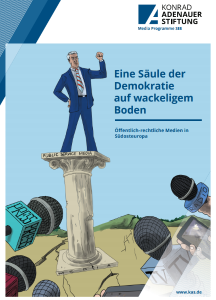