Autocracy versus Democracy: Who is doing more to protect the climate?

The Multinational Development Policy Dialogue - KAS in Brussels is happy to share with you our #MDPD Briefs on climate change, climate protection, climate policies & environment.

The greater the pressure to limit global warming to an acceptable level, the louder the demands for an ambitious approach to climate protection. In democratic societies some groups demand “radical” action, even at the expense of democratic majorities and legislative processes. Illegal action becomes morally justified as part of a fight of “good versus evil”. These groups feel emboldened by the position of certain democratic governments that in the past years have been opposed to climate protection, such as the US, Brazil and Australia. At the same time, authoritarian regimes try to present themselves as effective protectors of the climate. As such, democracies face the challenge to prove that they are capable of sustainable, effective climate policy based on civil liberties, political participation and pluralistic political competition. It is therefore worth taking a closer look at the truth of common allegations against democratic systems with regard to climate protection.
December 7, 2020 Ordering Information

It is true that climate action requires a cross-generational policy approach. In this context, there is a widespread belief that autocracies enjoy long-term stability and can therefore ensure consistent climate protection. At first glance, autocratic governments appear to have an advantage because they can prescribe climate-protection measures regardless of voter attitudes, while in democracies climate policy is sometimes forced to take a back seat when other issues are at the forefront of public attention.

However, it would be premature to conclude that democracies are unable to implement ambitious, long-term climate-protection measures. If we shift our focus to the potential of civic engagement and the free formation of opinions, a different picture emerges. Critical thinking

and a highly educated populace have produced social movements in Western democracies that have been calling for environmental and climate protection since the 1980s. The most recent example is the Fridays for Future Initiative, based on which European democracies have shown that they are capable of ambitious climate policy. In that vein, the new EU Commission has announced the European Green Deal, which aims to achieve a climate-neutral Europe by 2050. This goal has already had an impact on the EU’s Multiannual Financial Framework, increasing the budget share for climate protection from 20% to 30%.

Democracies also enable climate policy action at other levels: in the US, individual cities and states promote climate protection regardless of the Trump administration’s policies. It is expected that these efforts will reduce national emissions by 25% by 2030 (compared to 2005 levels). This is only possible due to the decision- and policy-making powers of sub-national entities in the US – something which seems impossible in centralised, autocratic systems.

Criticism #2: “Because of their consensus-based decision-making processes, democracies struggle to ensure fast and ambitious climate protection.”

Democratic decision-making is often perceived as cumbersome. In addition to the need to find compromises within governments and parliaments, there are legally-mandated procedures to allow participation by interest groups and those impacted by climate policy measures. These procedures can slow processes down, but they also ensure legitimacy and thus have a stabilising effect on societies and political structures.

However, such delays can also be so long that processes have to be accelerated to enable political action, as is the case with wind power expansion in Germany. Nevertheless, the regulated balancing of interests remains an important part of democracies because it offers citizens as well as companies protection from arbitrary state intervention.

Could China serve as a model?

Since the US announced its withdrawal from the Paris Climate Agreement, the Chinese government has made great efforts to strengthen its climate protection profile at an international level. At first glance, the numbers seem to speak for themselves. No country invests as much in renewable energies as China. In 2018, renewable energy made up 38% of the country’s total electricity capacity. However, in 2016 alone, China burned as much coal as the rest of the world combined. Around half of China’s electricity generation is still coal-based. In line with that, due to the economic consequences of the coronavirus crisis, the Chinese government recently approved the construction of several new coal-fired power plants.

Criticism #3: “Democracies were only able to build their prosperity through high CO2 emissions and are therefore responsible for the climate crisis.”

The increase of CO2 emissions since the beginning of the industrialisation invites the conclusion that western democracies bear a historical responsibility for climate change. Together, they have been responsible for nearly half of all CO2 emissions. However, in the context of the UN Framework Convention on Climate Change these countries recognised that industrialised and developing economies share a “Common, but Differentiated Responsibility”, with industrialised countries committing themselves to a pioneering role in climate policy.

Western democracies are indeed fulfilling this pioneering role, at least in part, as is evident from their increased CO2 productivity (economic output in relation to CO2 emissions) and their financial and policy-support for poorer countries. Moreover, per-capita emissions of authoritarian emerging economies such as China are now very close to the levels of western industrialised countries. This has created a rapidly-growing joint responsibility for global climate protection between the West and emerging powers.

Beyond the question who caused the pollution, it seems equally important to consider where the solutions for climate change mitigation are coming from. Democracies have considerable potential in this regard due to their open and independent science and the free exchange of opinions.

It is not by coincidence that the phenomenon of climate change was discovered by western scientists and became part of the political debate due to strong independent voices. Independent democratic structures also promote innovative approaches that bolster the emergence of sustainable economics. Indeed, western companies increasingly adhere to the principle of Stakeholder Value, a new form of sustainable entrepreneurship that goes beyond profit-maximization and accounts for broader public interests such as climate protection.

The economic and geopolitical rise of authoritarian emerging powers also involves climate policy. Climate-friendly technologies provide these countries with the potential to raise their political and economic profile as they compete with democracies. But the criticism levelled against democracies is based on a superficial understanding of democratic processes.

Participatory democratic processes can indeed create obstacles for climate policy. However, strong societal awareness and the anchoring of climate policy at various political levels are more important when it comes to climate protection. By contrast, autocracies quickly face issues of legitimacy if their claim to leadership is primarily based on promises of economic growth. If such growth does not occur, climate policy in autocracies is likely to disappear from the political agenda – not only on a federal but also the sub-national level.

In fact, no convincing evidence has been provided to date that autocracies do a better job at protecting the climate. Without an active civil society, political competition, and free media, there is a lack of crucial mechanisms for disclosing climate-policy deficits and demanding more ambitious climate action.

While climate change can be mainly traced back to the industrialisation of western countries, democracies are at the forefront of producing decisive approaches to mitigate climate change, drawing from their extensive potential for scientific, social and economic innovation. Against this background, it is crucial to thoroughly explain the strengths of democracies in matters of climate protection, defending them against superficial criticism. Because, in a rapidly changing world order, climate policy has become part of a global competition between democracies and autocracies, subject to the whips of harsh power politics.

💡 Download & read the full text! (button at the top right) 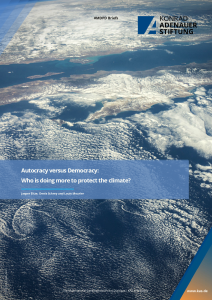