Far beyond what was conceived through traditional security and military doctrines, we face new challenges that pertain to human and political security. What matters is not only who wins new territories, but who wins the data, the trust, the hearts and minds of citizens within a country or polity.
January 8, 2021 Ordering Information

Elections are a key element of any democracy. However, we have seen in the past the fallacy of electoralism and the temptation by many external actors to declare a political system as democratic just because of regular electoral exercises. Often the quality of elections as such has been disregarded, or deficiencies in the electoral process were identified, but persist without any consequences. According to widely recognized international standards democratic elections have to be free, meaning the rights of citizens to participate and to compete are respected and protected by the rule of law. Democratic elections are equally meant to be fair, meaning that a level playing field should exist. But what do these minimal standards mean in the age of artificial intelligence and new technologies. Election campaigns as well as the electoral process run by Electoral Management Bodies are increasingly digitized and thus vulnerable to AI-enabled cyberattacks. The convergence of cybersecurity with AI and other emerging technologies enhances the risks for subversive attacks jeopardizing the conduct of free and fair elections, and thus the integrity and legitimacy of the entire electoral process.

The present study “Cyber-AI Convergence and Interference: Securing elections and building human resilience” by Eleonore Pauwels dissects how the convergence of AI with cyber- and information offensive operations impacts the security of elections. It provides a matrix of an electoral cycle analyzing how the convergence of AI and cybersecurity impacts the landscape of threats and vulnerabilities of an electoral process. It identifies data-targets as well as human vulnerabilities and attack-vectors tailored to electoral processes.

For a political foundation such as Konrad-Adenauer- Stiftung who has in its mandate the support of democratization processes worldwide, the impact of new technologies on electoral processes and the state of our democracies is of utmost interest.

We have the political space, the ambit where candidates and parties are campaigning, seeking popular support and where online defamation, hate-speech, data leaks, disinformation and deep-fakes can alternate the level playing field. It is this level, the capturing of the hearts and minds of citizens, which a previous study by the author “The Anatomy of Information Disorders in Africa” dissected in detail and illustrated with examples from the African continent. But we also have the technical space, analyzed in the present study, where particularly Electoral Management Bodies are the most vulnerable institutions. It is a sphere where data manipulation by local or foreign actors can disrupt an electoral process, and where competing political parties need to have sufficient expertise on technologies used in order to understand and to prevent any electoral fraud.

In order to gain further insights into the vulnerability of the electoral cycle to modern technology, KAS New York embarked together with the author on this broader research project that besides of the use of AI to generate hyper-targeted disinformation campaigns, data-manipulation and cyber/AI-enabled cognitive-emotional conflicts and disinformation also addresses pertinent questions such as how fit for purpose are electoral laws in the context of today’s technological abilities? And how can security and resilience of election infrastructure be guaranteed best?

The results of these analyses are meant to assist and to sensitize Electoral Management Bodies, law makers, political party representatives, media and civil society to the emerging threats which jeopardize the democratic character of elections and bring about wide-spread repercussions for the political culture of societies. 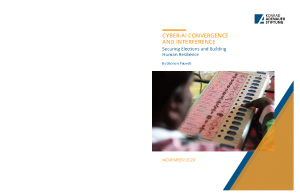