„Where next for the European Union and transatlantic relations?" - Foundation Office New York

„Where next for the European Union and transatlantic relations?"

by Victoria-Charlotte Browning
European politics in an era of uncertainty.
September 3, 2017 Ordering Information 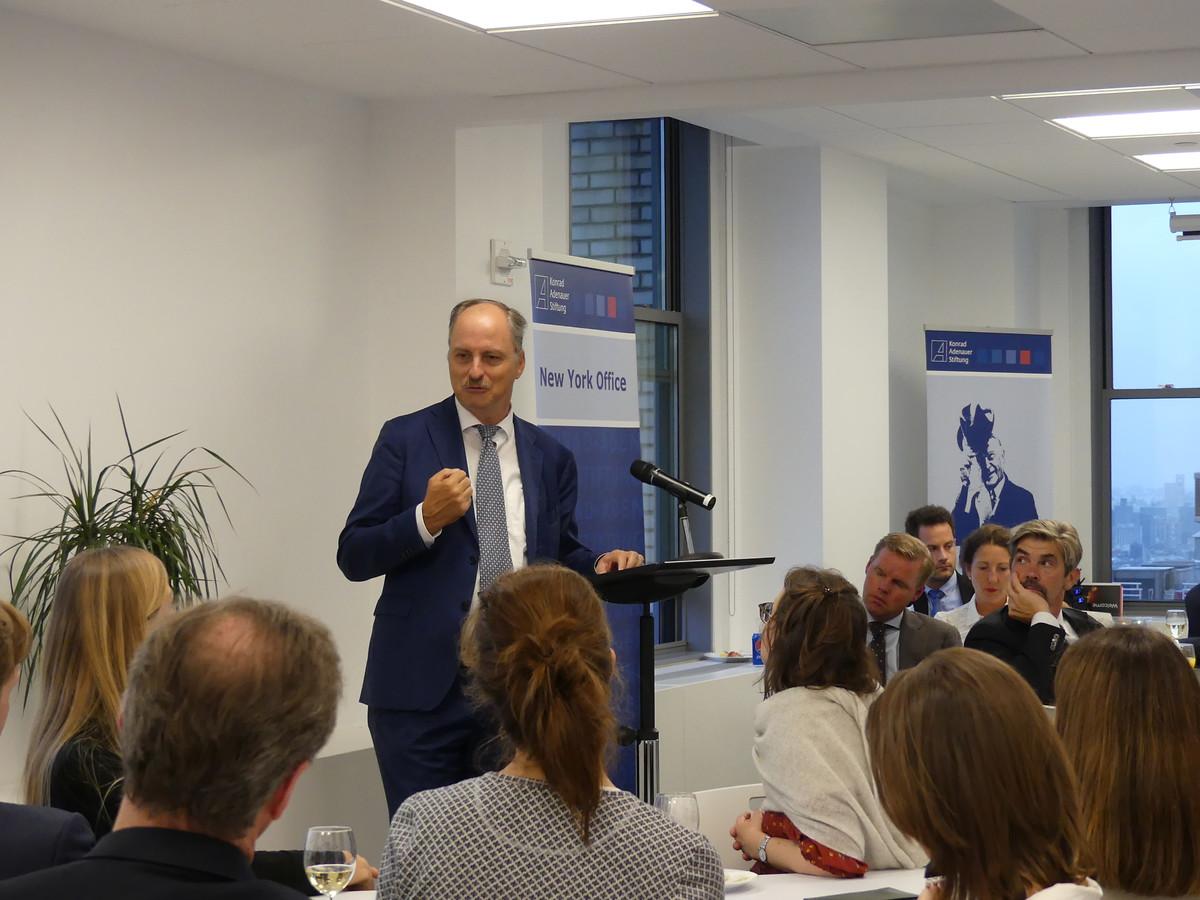 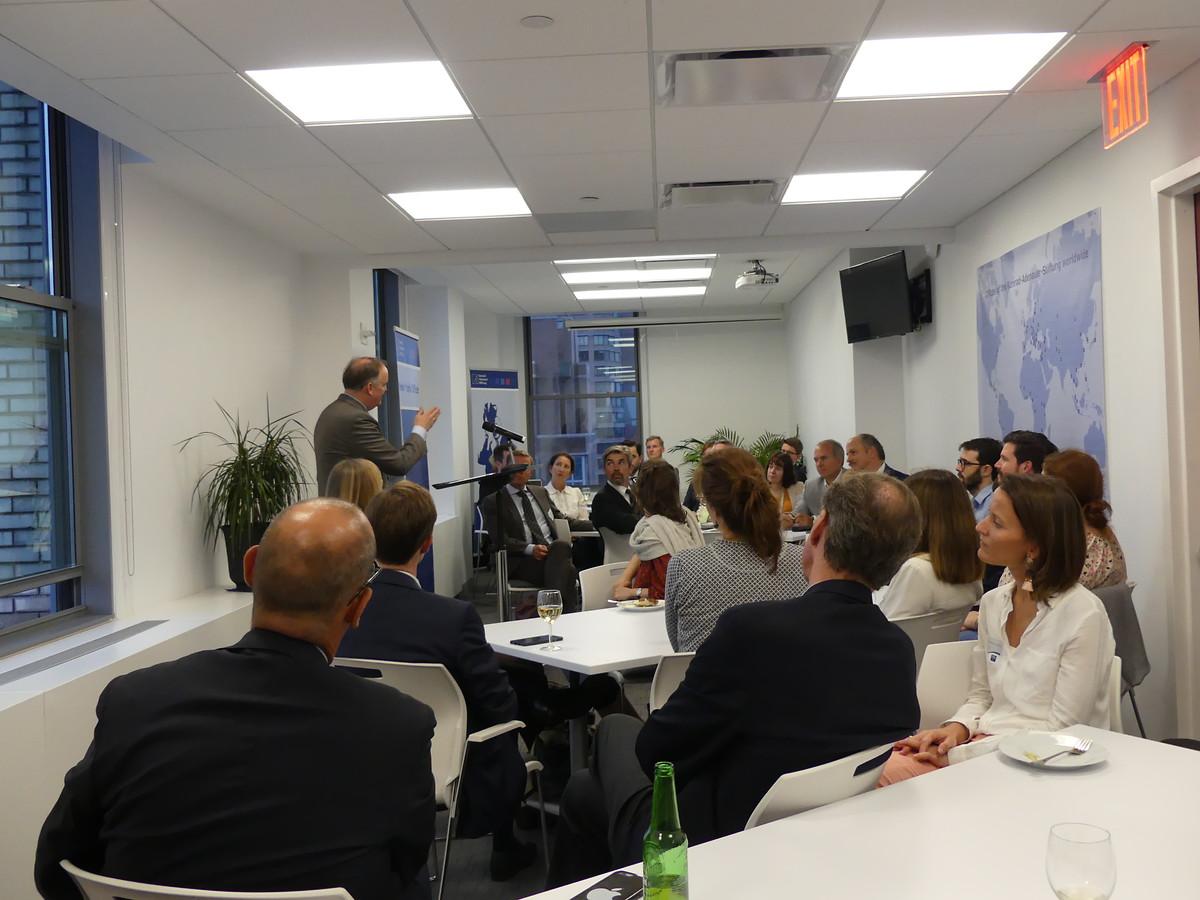 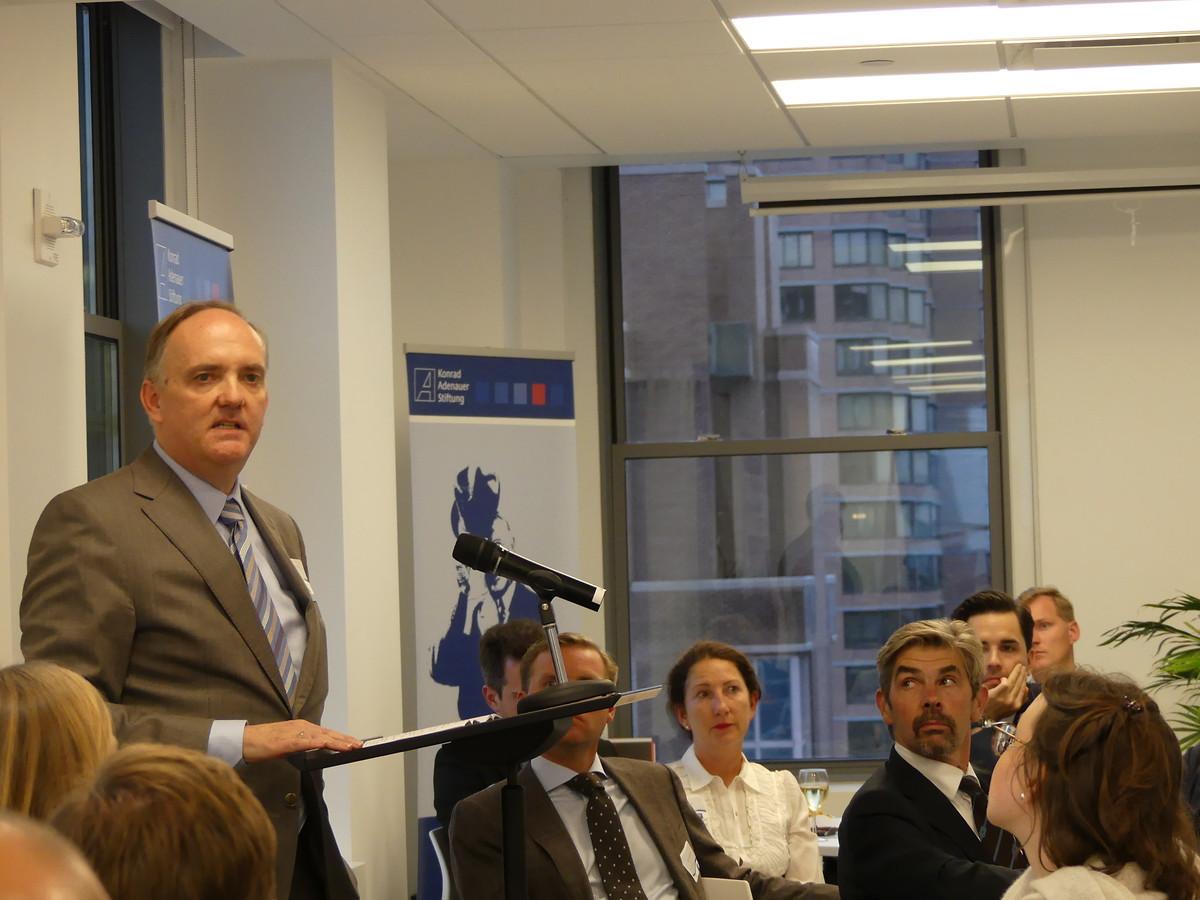 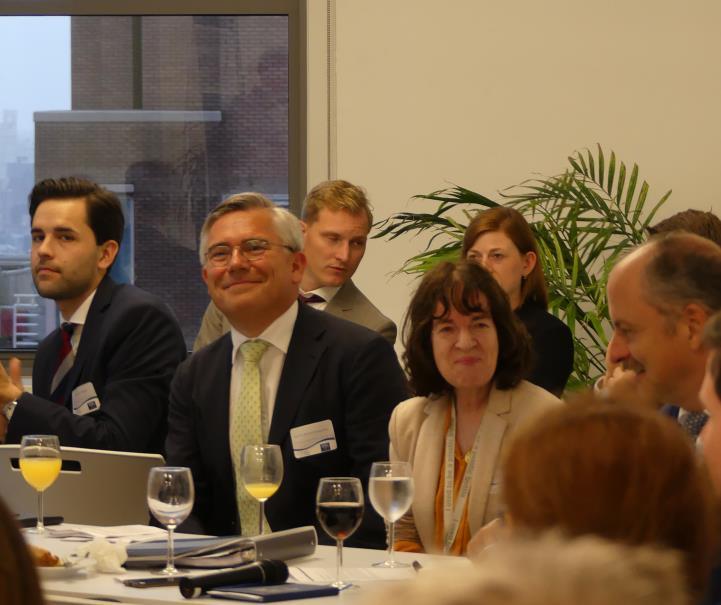 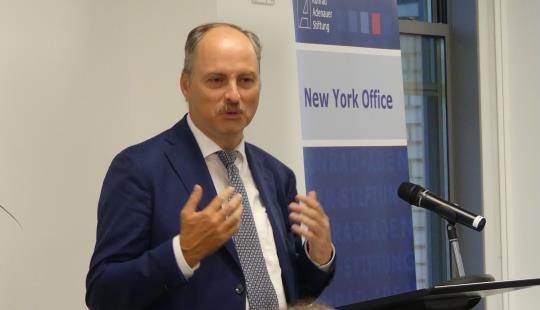 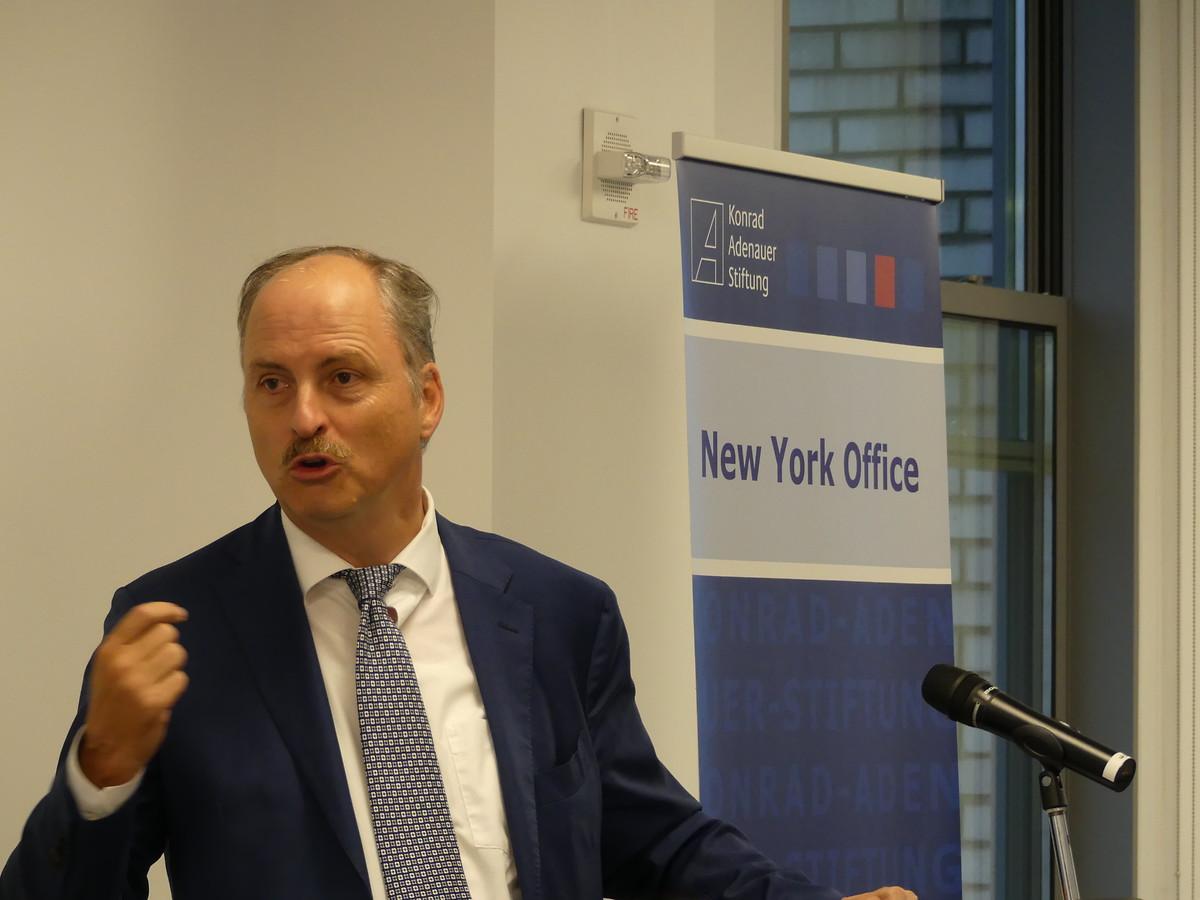 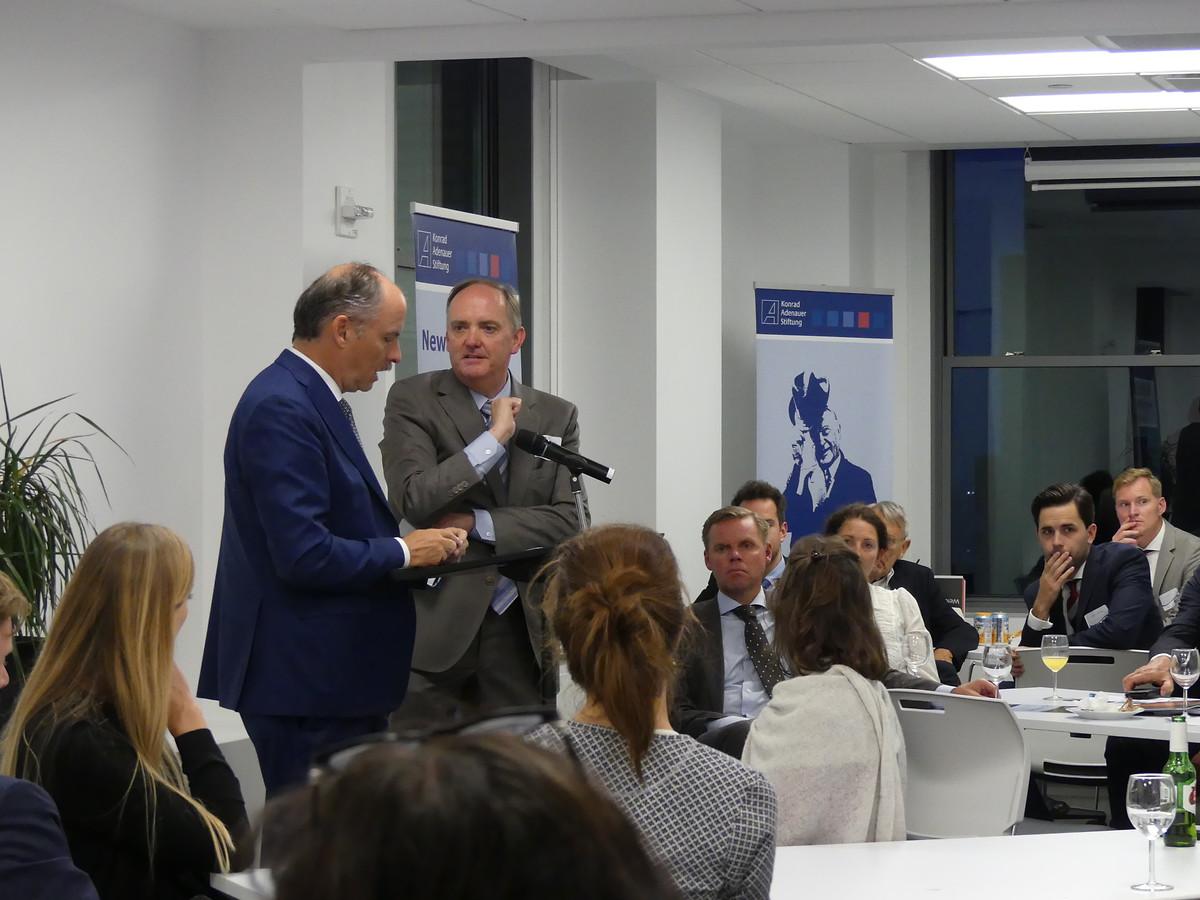 Klaus Welle, Secretary General of the European Parliament, takes questions from interested listeners after his speech.

On August 29th 2017, the Konrad Adenauer Foundation welcomed Klaus Welle, Secretary General of the European Parliament, to speak about the politics of the EU in an era in which international institutions and transatlantic relations are being severely tested. He made the trip to New York to hold talks with representatives from the United Nations and affiliated organizations. Mr. Welle, who is a former KAS scholarship recipient himself, was joined by a group of current scholarship recipients, who traveled to New York for a UN seminary hosted by the KAS New York Office.

Mr. Welle started his speech by expounding on what many presumed to be an “end to history” after experiencing the conclusion of the Cold War. But what was alleged to be a global victory for capitalism and democracy does not hold true today. While capitalism has widely established itself, democracy and human rights seem to be challenged once again. With extreme views being on the rise, Mr. Welle described political systems and parties to be under severe pressure. He drew a comparison between populist trends today and in Germany’s 1930s and 1940s by identifying parallels: a rise in nationalism and racism, an increase in strong-man culture and the devaluation of rational arguments.

These extreme views, as Mr. Welle emphasized, can be found across the political spectrum and often promise protection from foreign influences, elites or immigration. The inherent consequence of this promised protection by extremist forces would be the development into a closed society. Mr. Welle therefore posed the key question: Can the political mainstream still convincingly offer protection without undermining the openness of Western democracies?

In this context, Mr. Welle ventured into current dynamics between forces that are fighting between the “Open” and the “Closed”. He pointed out that these developments can be identified in Europe and the US alike. For this very reason, and because similar political systems matter, Mr. Welle emphasized that the EU and the US can find no better partners than each other. He additionally explained that the shock from extremist efforts in either direction of the political spectrum are often absorbed and cushioned by the judicial branches of democracies. He therefore reiterated his commitment to the rule of law and underlined the importance of political decision-making that is based on constitutional accuracy. He encouraged policy-makers on both sides of the Atlantic to value the common principles in their respective political systems and called upon actors on both sides to deepen EU-US relations.

With regards to internal European developments, Mr. Welle recalled the Bratislava summit during the aftermath of the BREXIT vote in September of 2016, in which leaders agreed to deliver on the concerns of European citizens. The Bratislava Roadmap identified certain issues as a matter of priority, including migration, terrorism, as well as economic and social insecurity. A focus on these concerns could be crucial in convincing the European voter that mainstream policy agendas offer sufficient protection, while safeguarding values such as openness and freedom.

Though Mr. Welle acknowledged BREXIT to be a major loss for the union, he also sees potential that this drastic development might provide European leaders with the momentum to sustainably reform the EU’s business model. He additionally finds hope in the combination of the German and French leaders, Angela Merkel and Emmanuel Macron. Both, as assessed by Mr. Welle, possess the unique blend of being experienced politicians while simultaneously owning a deep understanding of the subject matters they engage with. With this tandem, Klaus Welle optimistically concluded, Europe finds itself in a good position.

With regards to future EU politics, Mr. Welle suggested to follow the strategy of going after low-hanging fruits, thereby meaning issues that require a low investment of costs but that are sure to yield high marginal returns. He identified Security and Defense as one of the sectors in which more cooperation between European resources could prevent waste and safeguard a more efficient burden sharing.

Reallocation efforts, however, will require a greater sense of unity within the European community. In this regard, Mr. Welle called for caution for those who only focus on national history and heritage, and encouraged EU member states to appreciate themselves as a vital part of European history at large. EU identity, he concluded, can complement national identity – which is foundational for true European solidarity.

Mr. Welle’s thought-provoking speech led to a lively debate with the approx. 45 carefully selected guests. In an especially appreciated manner, the Secretary General of the European Parliament took ample time after his speech to engage in an intimate discussion with the attending KAS scholarship recipients.