“To keep the European Union together, we must change;” this was the message that Nikolas Loebel, a member of the German Bundestag, delivered during a discussion-luncheon with members of the American Council on Germany and other foreign policy experts at the Konrad-Adenauer-Stiftung New York Office on May 24th. The occasion of the event was to discuss the future of European security cooperation and dangers facing the liberal order.
June 12, 2018 Ordering Information 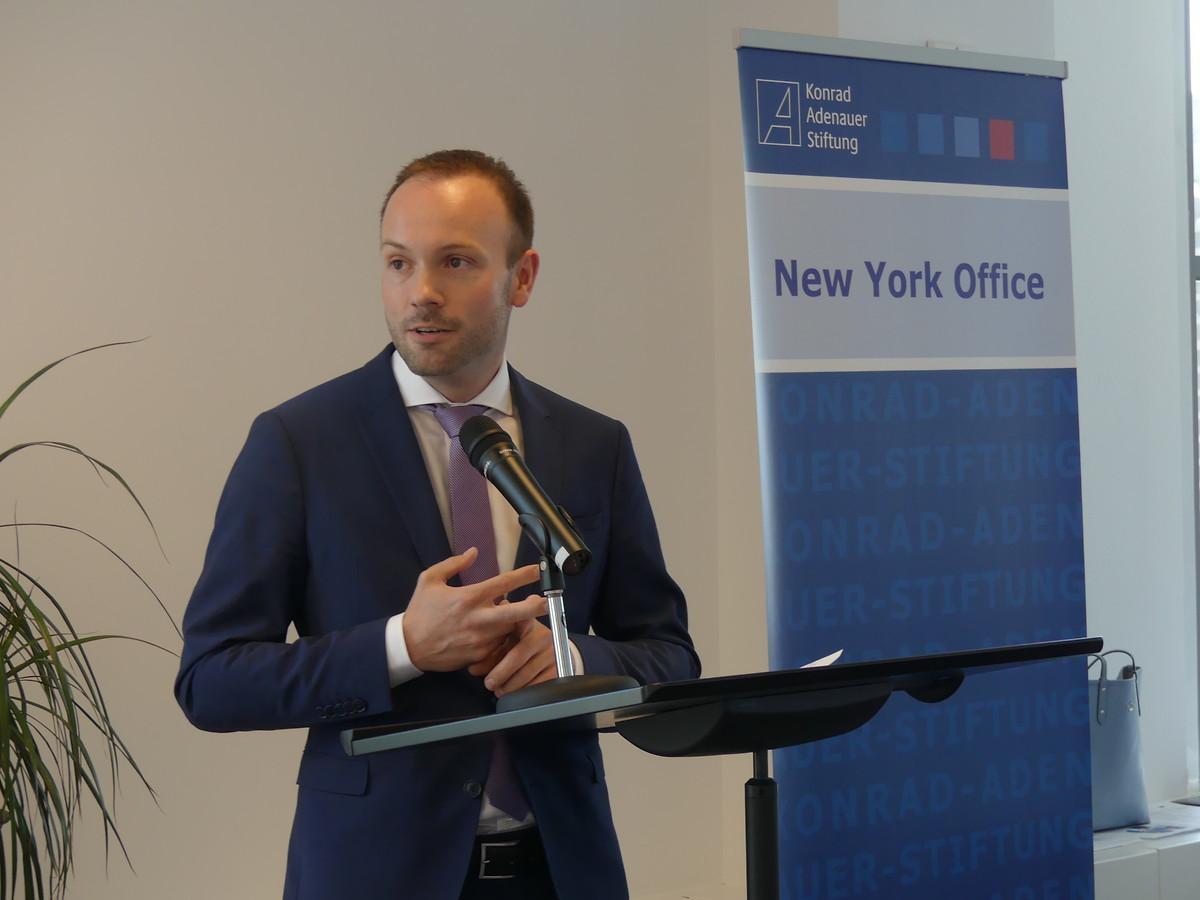 Mr. Nikolas Löbel, Member of the German Bundestag, during his speech at KAS New York office.

Hailing from the city of Mannheim, Mr. Loebel, a newcomer to the German Parliament, engaged in a lively discussion on a variety of topics, such as the outcome of the 2017 General Election, free trade, NATO, the future of transatlantic partnerships and the role of Germany in the European Union (EU).

In terms of how best to address the mounting issues regarding the future of the EU, Mr. Loebel stressed the importance of ensuring peace, freedom, security and economic wealth throughout all 28 Member States; however, there was no blanket solution to every dilemma facing the EU, such as the refugee and Euro Crisis.

Mr. Loebel said that the role of Germany in the international sphere was also changing. In order to ensure the preservation of liberal institutions, policymakers in Germany was well advised to shift their overall approach to German foreign affairs from the traditional ‘moral’ outlook to a more ‘practical’ one that prioritizes German national interests. German foreign policy moving forward should be more pro-active instead of just reacting to events as they happen.

Mr. Loebel also explained that he learnt during his trip to Washington D.C. this preceding week that a major concern among policy experts within the Trump Administration was the question of increasing the defense budgets of NATO members, which do not meet the 2% of GDP target. Mr. Loebel countered that this internationally agreed spending rule remained ‘unachievable’ for Germany. In order to meet more realistic expectations, Mr. Loebel proposed that the German government should pursue a plan aimed at increasing the military budget to 50 billion euros, allowing for defense spending to account for 1.5% of GDP. In addition to increasing military expenditures, Germany was also engaged in match funding for aid, with another 50 billion euros being directed towards international development projects.

In conclusion, Mr. Loebel emphasized the significance of informing younger generations about the important role that a productive transatlantic partnership plays in securing Germany’s future. German politicians, as Mr. Loebel advocated, need to step out of the “Berlin Bubble” and face the realities and challenges affecting the world today.