Europe Goes to the Polls: What to Expect from the European Parliamentary Election

by Sebastian Borchmeyer
Mr. Klaus Welle, Secretary-General of the European Parliament, briefed the audience on the upcoming European elections, a watershed moment for the European Union. The event was cohosted by the American Council on Germany (ACG).
April 9, 2019 Ordering Information 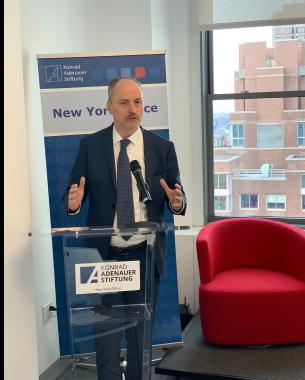 Mr. Welle, who has been Secretary-General of the European Parliament since 2009, described the difficult environment in which Europe finds itself in the run-up to the European elections in 2019. While the beginning of the 21stcentury was marked by a spirit of integration and a series of EU and NATO enlargements, the European Union increasingly has to cope with centrifugal forces. Europe’s neighborhood has become more instable as multiple crises in the Middle East and the ongoing rivalry between Iran and Saudi Arabia show. Furthermore, the United States—the mainstay of the international global order that she created after World War II—elected a President, who seems to be unwilling to defend it. Domestically, the EU faces tremendous challenges with several member states still coping with the aftermath of the Global Financial Crisis. In addition, globalization and the age of digital transformation have created a sentiment of citizens feeling “being left behind,” which fuels anti-establishment forces.

Mr. Welle explained that the nature of political parties is changing, too. In the digital age new political forces don’t need to have grassroots structures anymore. The times when the EU was in the favorable situation of moderate right and moderate left parties alternating in government are over. Today, moderate and populist parties compete over political power and enter coalitions. The erosion of the traditional political party system on the national level is a development from which the European Parliamentary Elections cannot disassociate itself.

Like on the country level, Europe’s political landscape experiences tectonic shifts and the shape of the newly elected parliament will be different from the past: with regard to the European People Party and the Progressive Alliance of Socialists and Democrats, predictions are quite difficult as long as it is unclear if the United Kingdom will participate in the elections or not. The Alliance of Liberals and Democrats for Europe will likely gain due to Macron’s party joining it, but there might be a debate about the term “liberal” in the party’s name, which has a different connotation in France. The various right-wing populist parties will group themselves into two larger camps characterized by system opposition and “governing logic”. The new situation will have consequences for governance in the European Union, whereby legislation will be less affected as a simple majority is sufficient here; however, achieving a qualified majority will likely be difficult; the first important test will be the election of the EU Commission President on July 6th.

With regard to the election campaign, Mr. Welle said that the concept of “Spitzenkandidat” (lead candidate or frontrunner) will likely be kept in the future and that there would be party programs centering around three programmatic pillars, namely, first the EU market, digital market and energy; second security, defense, social protection and migration; and lastly the EU’s future role as geopolitical force.

Mr. Welle explained what he believes was the prime reason why voter participation in European Elections had been so low compared to national elections. Since national legislators have redistribution powers, they could promise to alter taxes and social benefits schemes in the favor of their constituencies, which is beyond the legislative competence of the EU Parliament.

Mr. Welle concluded by a call to create a common European vision describing where we want to be in 2030 and how we could ensure that Europe’s voice is still being heard. A subsequent backcasting exercise would be needed to identify policies and programs connecting the long-term vision of the EU with present day decision-making. For the EU to remain a pillar of the world order next to the United States and China, the legislative and executive capacities would need to be strengthened, in particular in moments where Members States would come to their limits.