The fight against global terrorism has a little known ally – more united and expedient than one might think. This was the key message Dr. David Scharia offered in his speech in the KAS New York office on the evening of May 7th. In contrary to the prevalent common perception of the UN as a toothless tiger, Dr. Scharia explained how the United Nations effectively fight terrorism with a comprehensive and assertive approach.
May 18, 2018 Ordering Information 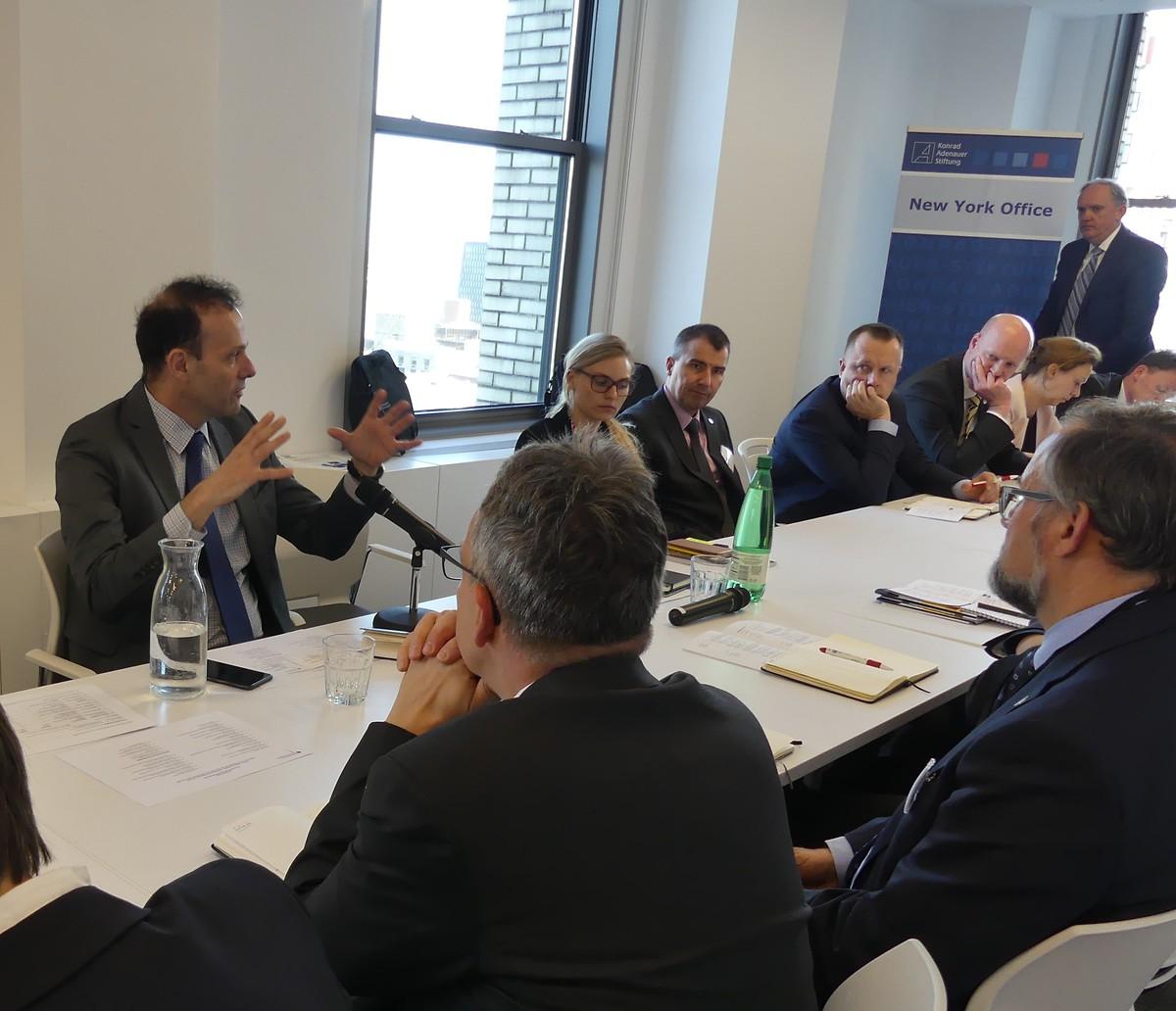 As the Chief of Branch at the Counter-Terrorism Committee Executive Directorate (CTED) of the United Nations Security Council, Dr. Scharia heads a large group of international experts, monitoring states' implementation of necessary measures and advising the Security Council Counter Terrorism Committee on related matters. The branch under his leadership covers different areas including legal and criminal justice responses, financing of terrorism, law enforcement as well as border control and terrorists' use of technologies and the internet.

The audience consisted of thirty distinguished participants of the German Federal Academy of Security Policy (“Bundesakademie für Sicherheitspolitik”), the most high-ranking German federal security course, consisting of an interdisciplinary three month-long program in Europe and the US. With various backgrounds from the military, business and scientific community, the participants expressed gratitude for the opportunity to get an insight into the transnational strategy for the fight against terrorism and to discuss the matter with an internationally recognized expert.

As Dr. Scharia explained, in the wake of 9/11 the United Nations Security Council adopted resolution 1373 which implemented global standards to fight terrorism. For the first time a resolution was not limited to a certain state or actor but targeted a global criminal phenomenon. The so called Counter-Terrorism Implementation Task Force (CTITF) was established by the Security Council in 2005 and consists of 38 member entities combining their expertise in order to monitor the effective global implementation of resolution provisions. Amongst the member entities is the CTED as well as organizations like UNDP, UNHCR and the World Bank. A number of in-house and external experts from those organizations visit several countries each year to report on the progress made and advise countries to translate all aspects of the UNSC resolutions into practice. Dr. Scharia pointed out, that in the last 12 years over 100 countries implemented far-reaching measures on the basis of the Security Council’s provisions, making the United Nations an important ally in the global fight against terrorism.

Following Mr. Sharia’s speech, the participants engaged in a lively and fruitful discussion with the speaker.