More parliamentary seats and political leadership roles for women - that is a demand of the Nobel Peace Prize winner and Opposition Leader Aung San Suu Kyi of Myanmar (Burma), which she articulated during an international conference of the Konrad-Adenauer-Stiftung, held in the country’s capital, Naypyidaw on October 04th and 05th 2013. Female Parliamentarians from Myanmar and countries of Asia and Europe discussed their experiences, tools and processes to increase the proportion of women in parliaments and political leadership.
October 7, 2013 Ordering Information 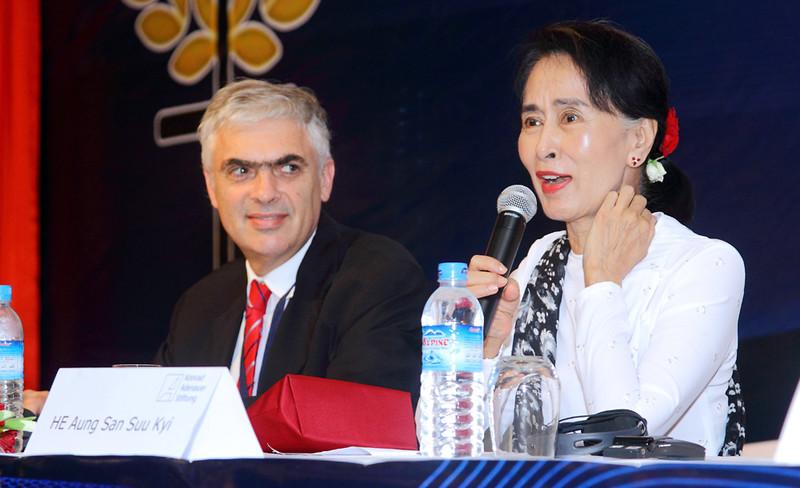 KAS
Daw Aung San Suu Kyi responded the questions of her parliamentary collegs from asia and europe. Next to her Dr. Wilhelm Hofmeister, Head of the KAS office Singapore. 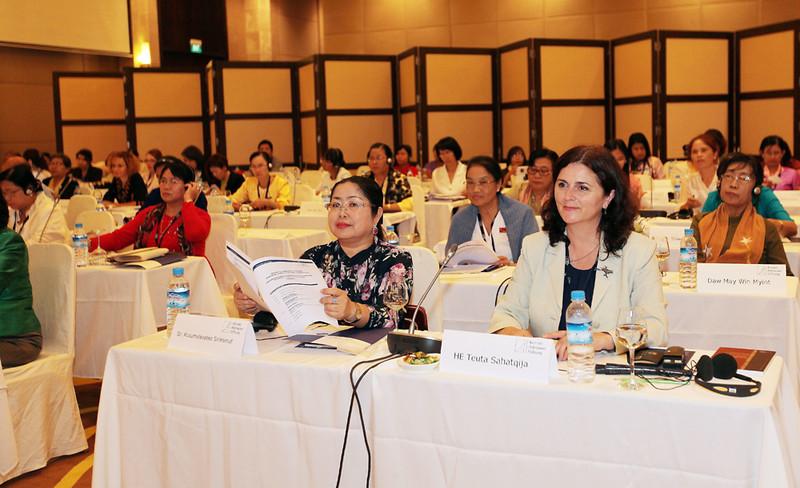 KAS
Guests of the international conference. 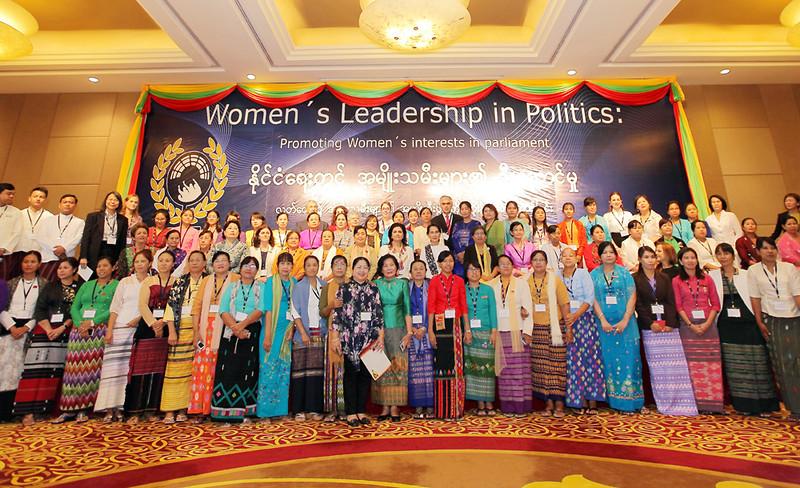 KAS
Picture of all the guests of the international conference.

Aung San Suu Kyi during the international forum affirmed that in the parliaments and governments of Myanmar, as well as on the national level and as in the regions, women should have a stronger presence and be better prepared to take on more leadership roles. The conference was attended mostly by MPs from the upper and lower house of the Myanmar National Congress, the parliaments of the regions and ethnic states, as well as by women from the boards of political parties and social organizations that engage themselves for the rights of women in Myanmar. Additionally, there were women parliamentarians from South Korea, the Philippines, Cambodia, Malaysia, Indonesia and Pakistan, as well as from the European Parliament, Germany, Spain, and even Kosovo and Serbia, two countries who have also experienced democratic transition processes not too long ago, present.

In view of the kindness and humility of their compatriots, Aung San Suu Kyi pointed out that many visitors to Myanmar have the impression that women have equal rights in the country. In reality, however, they suffer from widespread discrimination and are poorly represented in the newly elected parliaments. Only 4% of the seats in the Chamber of Deputies are occupied by women. In the "upper house" of the national parliament and in the regional parliaments, the proportion of women is even lower. Out of 200 ministers and state secretaries only four are women. Discrimination often begins in the family, where boys would be preferred over girls, receive a better education and would be spared in adopting domestic duties. This form of discrimination against girls and women continues in various walks of life and leads, among other effects to the low representation of women in political parties and parliaments.

Aung San Suu Kyi is recognized worldwide for her non-violent struggle against the military regime in her country. At the end of the 1980s, she had led the pro-democracy movement against the former military dictatorship. She was first sentenced in 1989 to house arrest. Her party, the National League for Democracy (NLD) achieved a landslide victory in the 1990 elections, but the military rejected this electoral triumph and Aung San Suu Kyi was sentenced, with brief intervals, for a total of 15 years of house arrest. Her party was eventually banned. In 1991 she won the Nobel Peace Prize, but due her imprisonment, she could not travel to Norway to receive the prize in person. All attempts by the military to banish her from the public, failed and her popularity in the country is unbroken. She was finally released after the elections of 2010; the military government thus prevented her to run in the election or to support her party. Aung San Suu Kyi again took the lead of her party and was elected to the lower house in a by-election in April 2011. She has repeatedly stated in recent months that she wants to be elected president of Myanmar after the 2015 elections. Due to the provisions of the 2008 Constitution, however, she would not be eligible. Therefore, a constitutional amendment is one of her central requirements for success.

During the international conference of the Konrad-Adenauer-Stiftung, she reminded the audience that during the decades of military dictatorship, women often have taken on the role of peaceful resistance and protest, when their husbands and sons were arrested or deported. If women were capable to assume political responsibility at that time, they too should be assigned to political positions today. Women are as well qualified for political leadership as men, Aung San Suu Kyi pointed out. However, the Constitution, written by men both from the military and the government, still contains a series of discriminations against women. That is one of the reasons why the Constitution should be changed.

The need for a constitutional amendment was also a topic during the discussion with the participants from Asia and Europe following her lecture. She asked the foreign visitors not to be fooled by superficial developments. Still no change has been seen for the majority of people in the country. The conditions of life have not changed yet. Only if the government takes the democratic changes seriously, the improvement of the living conditions and more investment could be expected. Promoting social and economic development for the people is the main reason why she wants to become president.

The role women have played in other countries of Asia and Europe during the times of political transformation and democratization, in addition to the instruments and procedures to successfully increase the presence of women in parliaments, political parties and governments, was the focus of the subsequent presentations and discussions during the international conference. Burmese MPs and activists as well as the international parliamentarians had an intensive dialogue.

As many speakers pointed out, there are still considerable disadvantages with regard to the political role of women in many other countries of Asia. In contrary, the parliamentarians from Europe could report significant progress in increasing the proportion of women in parliaments and the acquisition of key government offices. However, it is also clear that there is no unique strategy. Even within Europe, there exists dissent on the instruments that are successful for the promotion of women in politics. The experience of the two transition countries Serbia and Kosovo are remarkable because within a relatively short amount of time, a relatively high proportion of women was achieved in the parliaments and especially by cooperation among parliamentarians from different political parties.

The numerous questions and comments of the participants from Myanmar demonstrated that the issue has not yet been discussed intensively in the country. As it has been repeatedly mentioned by the participants, the conference of the Konrad-Adenauer- Stiftung was the first opportunity to bring the parliamentarians together to talk about women in politics and political issues of women.

Although there are very few women in the parliaments of the country, they have not yet created a common platform to unite forces and defend the interests of women collectively. One reason is the difficulty of dialogue among the representatives of the ruling parties and the opposition parties which also could be observed during the conference. This is an impediment for dialogue and agreement on common issues. However, representatives of both sides stressed how useful the meeting has been to discuss these topics for the first time with each other in an "neutral" environment without having to defend positions of the government or the opposition.

The representatives of women's organizations were very satisfied that such a dialogue was possible for the first time. They want to use the suggestions from this meeting for the activities of their organizations and also for their contacts with the parliamentarians to promote collective actions and to overcome differences to improve the political representation of women in Myanmar. Against the backdrop of the experience of other countries, for example, the idea of a women's caucus is to be pursued further in Myanmar. A deep dissent does still exist with regard to the introduction of quotas to ensure greater representation of women - even though several examples from Asia and Europe indicated that quota may contribute to achieve political goals. In spite of these differences, the meeting in Naypyidaw may have broken the ice between Myanmar parliamentarians. They want to continue this dialogue with the support of the Konrad-Adenauer-Stiftung.

The conference also offered a lot of information for the participants from Asia and Europe. As in other Asian countries the proportion of women in political leadership positions is still mostly limited, the parliamentarians from Asia discussed several tools and policies on how to improve it. The European parliamentarians learned about the situation in Asia and they concluded not to cease support of their fellow female parliamentarians in other continents in representing their interests.

Apart from the comments of the parliamentarians and participants received during the event, the conference gained wide media coverage in Myanmar. This confirmed that Konrad-Adenauer-Stiftung has taken up an important political and social issue, which is of great relevance for the continuation and consolidation of the democratization process in the country.

Aung San Suu Kyi has made it clear during the conference, that without a noticeable progress in the equality of women, democracy will not be possible in the country. Also in Myanmar, women should assume greater responsibility and leadership in parliaments and government.