by Patrick Rüppel
On 21 October 2013, the regional programme Political Dialogue with Asia of the Konrad-Adenauer-Stiftung Singapore, in cooperation with the Center for Industrial Development and Environmental Governance (CIDEG) of the Tsinghua University Beijing, organized a conference on “Europe-Asia Cooperation on Climate Change Negotiations”. The key note speech of this event was delivered by Mr. Su Wei, Bureau Chief for the Development of Climate Change in the National Development and Reform Commission (NDRC) and Chief Climate Negotiator of the People’s Republic of China.
October 22, 2013 Ordering Information 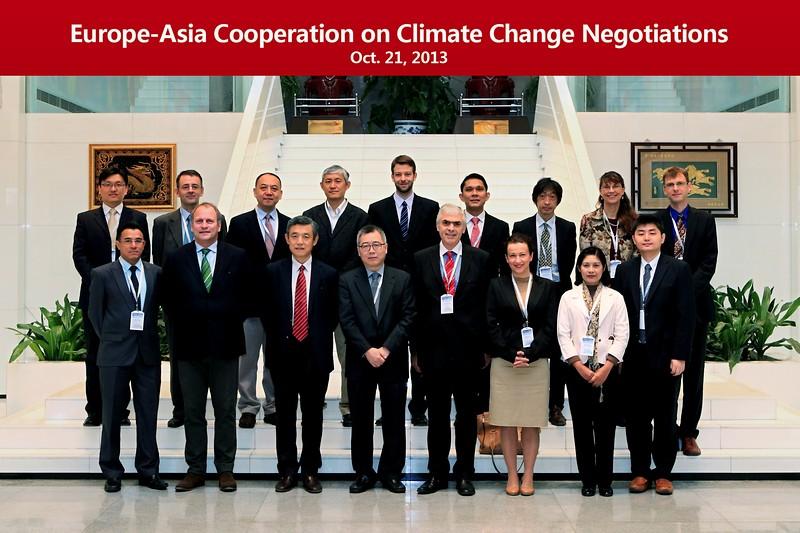 KAS
Group picture of the Speakers 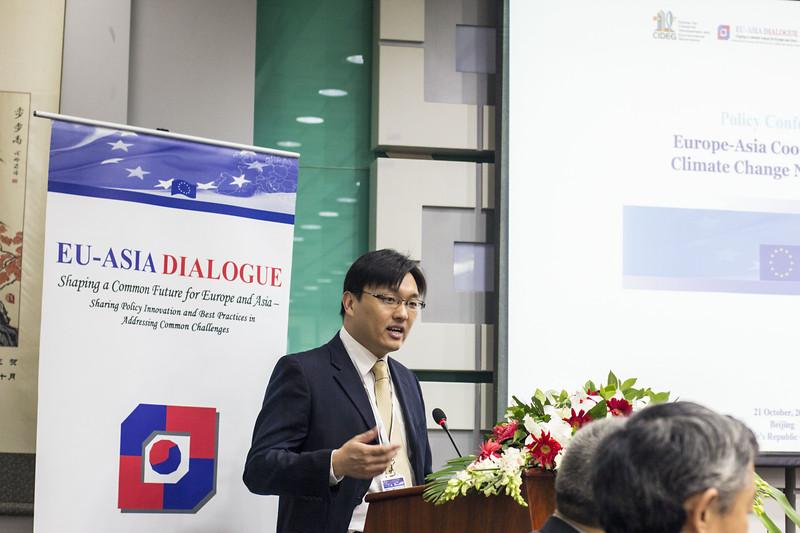 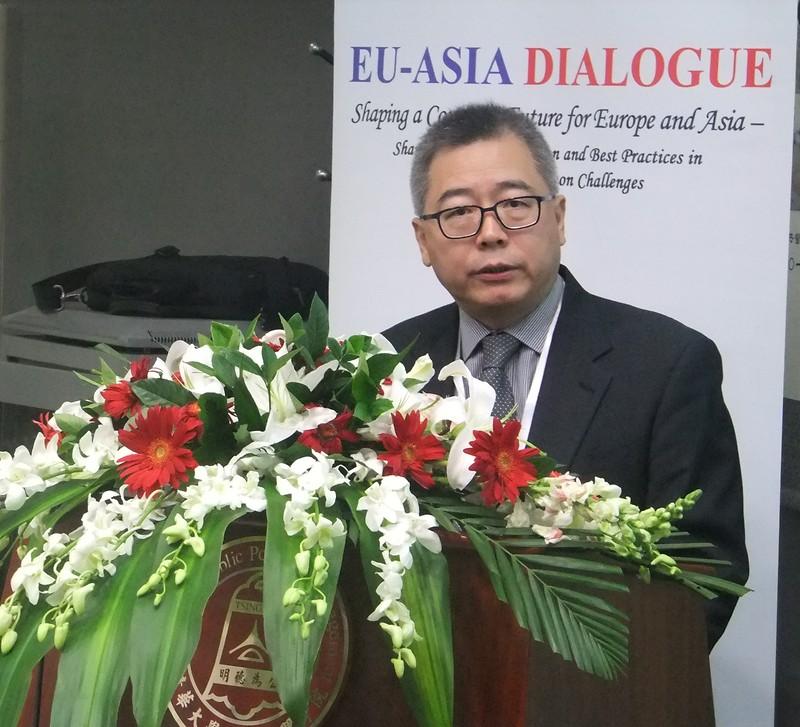 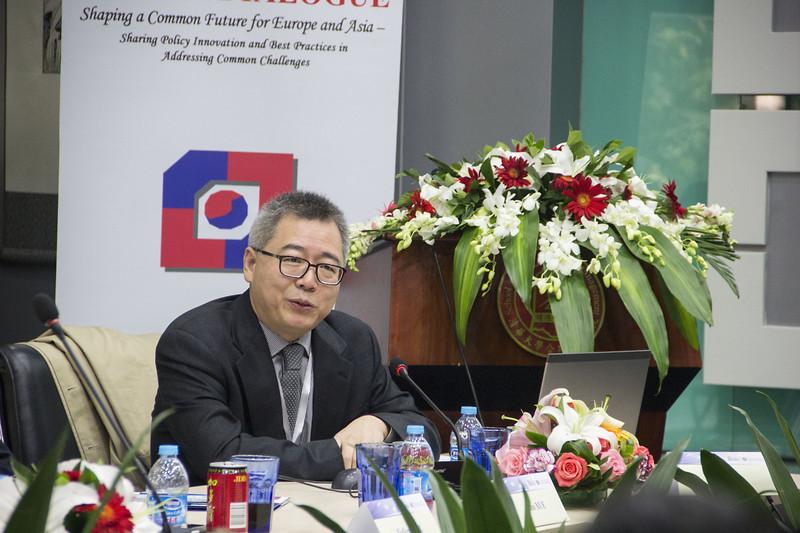 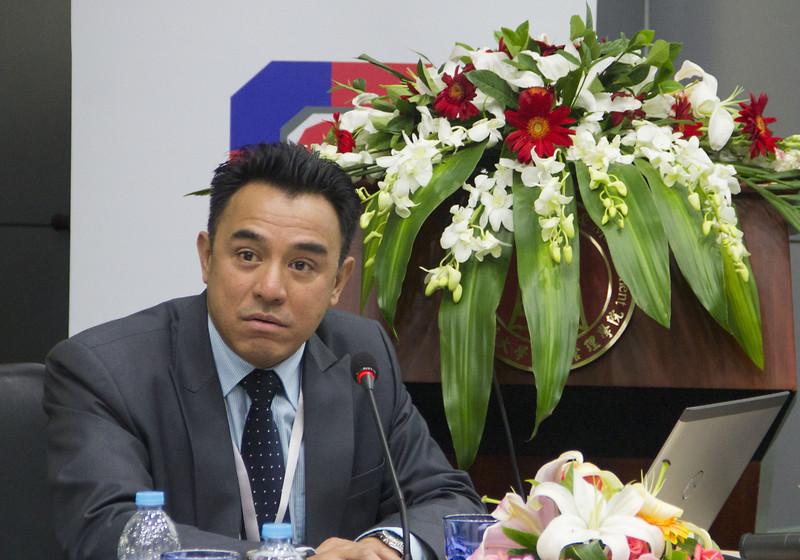 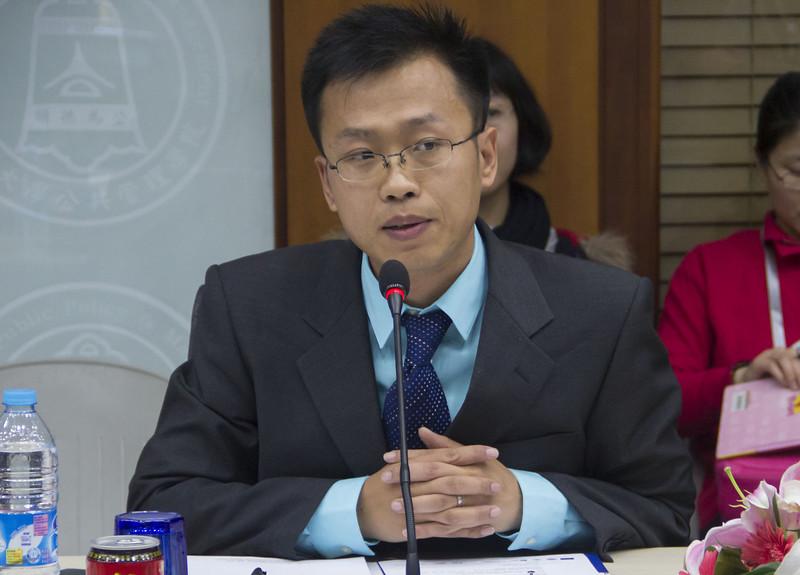 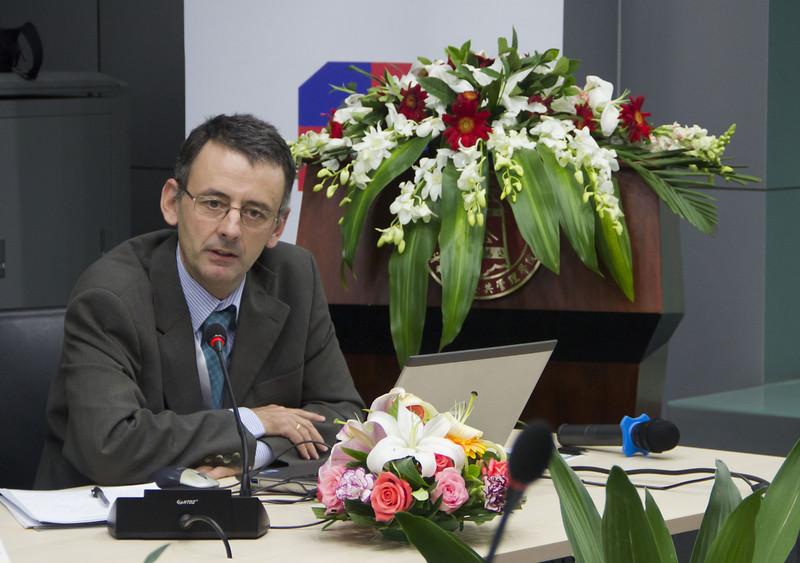 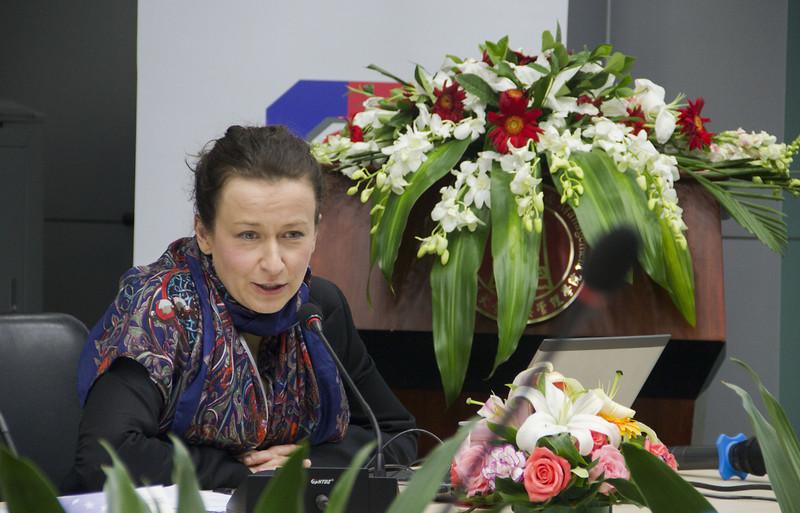 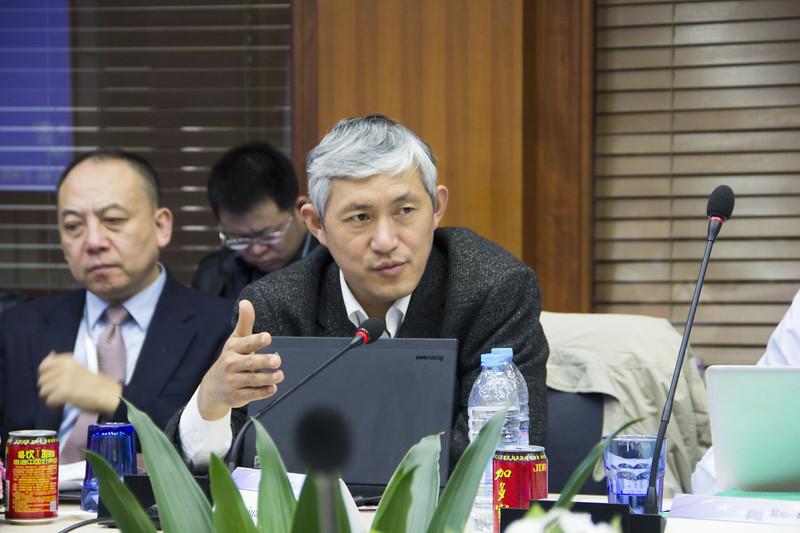 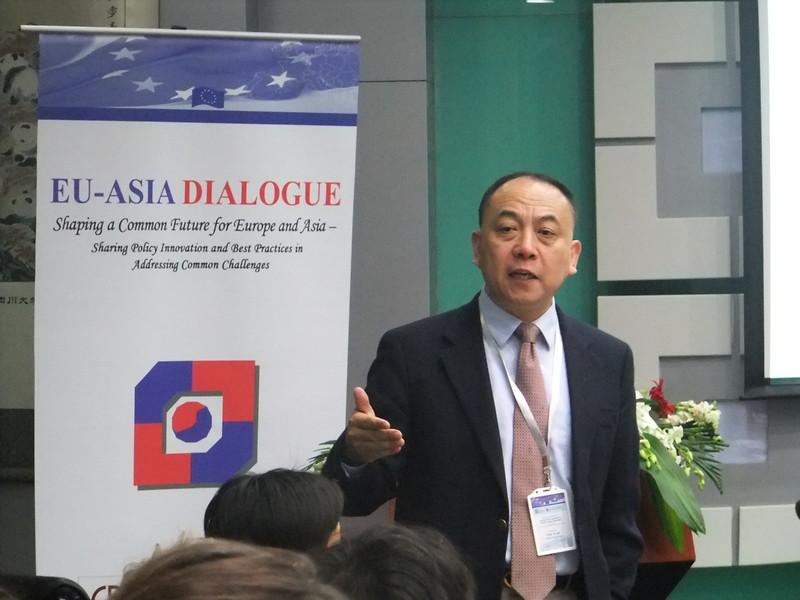 This dialogue is part of the EU-Asia Dialogue, a project co-funded by the European Union. Su Wei highlighted that no country is immune to the consequences of climate change and can fight the process alone.

Su highlighted that the People’s Republic of China, as a major developing country, is particularly vulnerable to the consequences of climate change which will pose an essential threat to the country’s food security, water management, construction projects and economic progress. Thus, it would be China’s core interest to harmonize economic growth with mitigation and adaptation to climate change. In order to achieve this, great efforts have been made in recent years. These include goals to save energy and monitoring this, development of low carbon technologies as well as reforms of the energy system to get an optimized energy mix. Additionally, big emitting companies would be more engaged in the process and obliged to meet certain criteria. This is accompanied by the promotion of low carbon economic development. As part of this, a nationwide carbon emission system will be initiated which explicitly includes the provinces and local capacity building. Su said that the new Chinese leadership strongly emphasizes environmental politics and climate change in the context of an ecological campaign. This includes the transformation of the economic development, improvement as well as establishment of institutional mechanisms and raising public awareness. The reduction of CO2 intensity (CO2 emission per unit of GDP) by 40-45 % by 2020 compared to the year 2005 and the lower input of fossil energy sources are concrete targets of this shift. As the CO2 intensity was already reduced by 23.6 % in 2012, Su was confident that the country will achieve this binding target.

China’s Role in the International Negotiations

According to Su, China is a strong and constructive advocate on the international level and supports the development of an international rule-based climate regime. The guiding ideas of such a regime must be equity and the principle of Common But Differentiated Responsibilities. It is important to get a win-win outcome and avoid a zero sum situation, which requires mutual trust among the negotiation parties. The United Nations Climate Change Conference in Warsaw (COP 19) would be a great opportunity to make good progress on this. For Su it is necessary to achieve consensus on the implementation of existing agreements, the ratification of the second phase of the Kyoto Protocol and to establish institutional mechanisms. The expectations in Warsaw are especially high in the area of finances and this topic is still lacking clarity on how the industrialized countries want to make their respective contributions. Su stressed that existing agreements, such as the Durban platform, shall not be re-negotiated and the Framework Convention on Climate Change not be re-written, but that their implementation needs to be ensured. The Chinese government wants to see actions and implementation as the talks have been going on long enough. Thus, the goal for Warsaw has to be to agree on a timeframe and principles for the 2015-agreement.

China’s expectations for the meeting in Warsaw are the preparation of a 2015-agreement within the Framework Convention which reflects equity and the principles of Common But Differentiated Responsibilities. In addition, Su emphasized that content matters now and not the question of the legal form of the agreement. A discussion on the legal status of the document would only delay the negotiations, while substance can result in concrete progress. Domestic climate change programmes are an essential driver of the negotiations. If countries were already committed to national targets, it would be much easier to achieve agreements on the international level. In addition, it is important that adaptation and mitigation are jointly addressed and mutual respect exists for each others concerns. At the end of his speech, Su Wei emphasized the crucial importance of cooperation between Europe and Asia. So far the joint efforts of the two regions in the negotiations have been successful as they share the same political will. Therefore, China is strongly interested in bi- and multilateral cooperation.

During the open discussion Mr. Su Wei emphasized a number of aspects. He said that China welcomes the recent announcements by President Obama on taking a more active stand on climate change. But he should also take the necessary actions rather than just announcing the plan. With regard to the future agreements, Su stressed the Chinese expectation for more action in general. China would be willing to contribute to this as well, but wants the agreement to focus on concrete actions and not on the approach as the Climate Change Convention and principles are already in place. The objective for the 2015-agreement has to be an increase of not more than 2°C compared to the pre-industrial time. This agreement can see bottom-up, top-down approaches and a mixture of both ways as long as they lead to the goal. However, for China it has to reflect the historical responsibility. Especially industrialized countries need to take the lead by reducing their emissions and initiate cooperation on financing and technology. Also, the emission itself is not the only point to be kept in mind, but the concentration of the greenhouse gases. This concentration includes historical emissions as they stay in the atmosphere for decades and centuries. Thus, there is an accumulation of historical emissions which needs to be addressed.

The 33 conference participants welcomed this kind of informal exchange and agreed that the climate negotiations are on a better way than publically perceived. It was emphasized that the 2015-agreement has to have a long validity and bring about big progress. New negotiations every five or ten years would only delay the process and create uncertainty.

A challenging aspect of the negotiations will be finances. While the industrialized countries, as agreed, have to contribute 100 billion USD annually, developing countries also have to play their part. In this context the new BRICS Development Bank can be of crucial importance. The participants were confident that the EU as well as the USA and China will achieve their respective climate targets by 2020. With regard to the EU, there was great optimism that the countries will over-achieve the goal of 20 % reduction in CO2 emissions compared to 1990. It was criticized that the EU in this case could easily accept a binding reduction by 30 % and set a sign by this. However, there is resistance among some Member States as they first want to see progress in non-European countries. An analysis showed that the EU will actually achieve this number even without formally committing itself to it if the current efforts are continued. At the end of the event, the participants emphasized their confidence that it will be possible to achieve a new agreement in Paris in 2015. 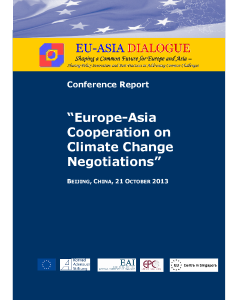