The world after Warsaw - What prospects for achieving a global climate agreement by 2015? - Regional Programme Political Dialogue Asia

The world after Warsaw - What prospects for achieving a global climate agreement by 2015?

On 5 December, 2013, the EU-Asia Dialogue organized a policy panel on “The world afterWarsaw - What prospects for achieving a global climate agreement by 2015?” in Brussels,Belgium. Four distinguished speakers from Europe and Asia discussed the outcomes ofthe most recent Conference of the Parties of the United Nations Framework Conventionon Climate Change in Warsaw.
December 5, 2013 Ordering Information

Artur Runge-Metzer, Director for International and Climate Strategy in the Directorate

General for Climate Action at the European Commission, said that, to outsiders, the

Warsaw meeting had appeared a failure. That is not the view of those involved. It is

change since the problem had been recognised in 1992.

years ago, while the EU is accelerating with its policies. Warsaw was important since all

participants had agreed to come forward with contributions in early 2015. They recognised

that this is a necessary condition for an agreement that year in Paris.

However, expectations are very different. For developing countries, contribution does not

for adaptation measures. He wondered how this would be sequenced and who would make

the first offer. What the EU puts on the table next year for its 2030 climate and energy

package will have wider implications. If the targets would be low, then other G20 members

would also start from a low base. What is needed is extensive discussion – “climate

to take matters forward. The following step would require the next 20 to 40 economies in the

world to make pledges. “They will have to be part of the Paris agreement.” This should

include China and “little tiger economies” such as Vietnam, Malaysia and the Philippines. Asia

create the necessary momentum to raise ambition for Paris.

Run Wang, Professor at the Institute of Urban Environment, Chinese Academy of

Sciences, pointed out that there are many issues from Warsaw which China is not satisfied

with, but could accept. China’s priorities had been to take concrete action to implement the

reviews and transparency and see developed countries honour the pledges made.

obstacles to a global climate change regime. That conflict could be seen in Warsaw. At one

point, the Chinese delegation, along with the G77 group of developing countries, walked out

nations for climate change damage. He said that the US has always been reluctant to accept

drastic emissions cuts, especially if these would place the US at an economic disadvantage

current capacity in hydro, nuclear, solar and wind power all rank first in the world, making a

plans to address climate change. Proposals are also on the table for an emission cap target

more expected in the future. “China’s domestic policies are moving quickly, which means we

can be more radical in international talks,” he concluded.

Abetnego Tarigan, Director of WALHI-Friends of the Earth Indonesia, noted that

adaptation and mitigation. The biggest source of emissions is changed land use. He

in the 2014 elections could lead to a change in policy.

and around forests. Land rights are a strong issue and the government is heavily focused on

material resources such as palm oil, nickel and gold which are main sources of income. The

country, whose economy is largely dependent on exporting raw resources, has already given

11.9 million hectares to palm oil and plans to increase this to 30 million. When it comes to

fossil fuels, Indonesia is a large consumer and the world’s second largest exporter of coal.

Marine pollution is also a problem since mining waste can be disposed directly into the sea.

Change Foundation, pointed out that various political factors had weakened the outcome

from Warsaw. These included the announcements of Japan and Australia that they were

downsizing their commitments to tackle climate change; the lack of ambition sought by the

Polish presidency; and the dominance of economic interests witnessed by a parallel

conference on coal as an energy source occurring in the Polish capital at the same time.

On the other hand, the typhoon that hit the Philippines gave a spur to the climate

negotiations. In addition, civil society, disappointed at the slow progress, walked out of the

negotiations, and declared their ambition to continue the work at a local level and place

pressure on national capitals. On the plus side, she welcomed agreement on REDD+ and the

emphasis given to monitoring, reporting and verification. Against that, she pointed to the

looking, rather than focusing on historical responsibility for emissions. The pledges made

should be seen as fair and equitable, otherwise there will be no agreement. It is essential

come forward with a strong position.

something on the table for the Paris meeting. He pointed out that Chinese emissions will

peak in 2027, with 70% of them coming from industry. China is working closely with the EU

as it puts emissions trading plans into place.

these are designed to keep costs down. While the government would like to reduce them,

this would mean increasing the minimum wage. In addition, any increase in fuel prices would

have a big economic impact in Indonesia.

pathway to the 2020 financial commitments. Developing countries had requested this after

the use of the fast funds, but this had not been fully addressed. Without that, there would be

suggest, would not be sufficient. Instead, she argued for over 50%. This would be feasible

and in line with science.

On finance, Artur Runge-Metzer noted that the fund would be fully operational by mid-

2014 and that finance for both mitigation and adaptation would be part of the Paris package.

reductions at least cost. That is what the EU is currently doing and China will do the same in

the future. Placing a price on carbon is one of the easiest ways to address the issue and

prevent emissions moving from one country to another as prices will gradually converge. He

in New York. However, this is not a negotiating venue. The best message to emerge would

be if participants pledged to be ready for an agreement in Paris six months later. 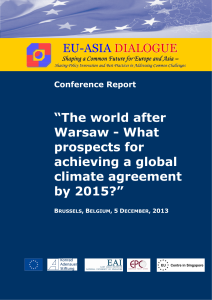 The world after Warsaw - What prospects for achieving a global climate agreement by 2015? (Pdf)
Download 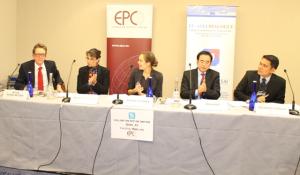