Under the support of KAS RECAP, the Energy Studies Institute, National University of Singapore conducted a study to examine the performance of fossil fuels and renewable energy amid the COVID‑19 pandemic in the Asia Pacific region. Taking the impacts of the COVID‑19 crisis into account, it analyses the change of policies, energy mix and investment on the energy sources in depth in selected Asian countries.
March 11, 2021 Ordering Information

The available data suggest that the share of non‑fossil fuel electricity generation increased by a few percent during the period of significantly lower demand in five of the seven countries studied. The percentage of non‑hydro renewable electricity (mainly utility‑scale) increased in all the countries studied. These successes resulted from purchase obligations on the grid companies or in Malaysia‘s case, a least‑cost dispatch rule. In some countries, the higher share of non‑hydro renewables may be attributable in part to an increase of installed capacity in the second half of 2019.

Thus, both non‑fossil fuels and non‑hydro renewable electricity displayed a moderate degree of short‑term resilience in the period of lower demand caused by the pandemic. However, in those cases with the relevant data available, these gains were quickly offset once the economies started to recover and electricity demand rose. In all cases studied, the construction of new non‑hydro renewable electricity generating capacity slowed down or halted due to a combination of movement restrictions and supply chain disruptions.

Data on changes in proportions of biofuel blending in transport fuels during the pandemic were not available. In most of the countries studied, the absolute quantity of biofuel declined along with the falling consumption of liquid transport fuels. The absence of an increase in biofuels‘ share can probably be attributed to their generally high cost compared to gasoline and diesel and the disruption of supply chains. This is not unexpected given the low level of international oil prices during 2020.

Governments of none of the Asian countries studied framed their economic recovery packages as being ‚green‘. This is understandable because the immediate priority was to protect livelihoods and support healthcare. Nevertheless, some governments did announce new energy policies. In several countries, governments declared continuing or even enhanced support for renewable energy, but also called for additional thermal generation capacity. Therefore, it is not clear how fast the share of renewable energy will grow in these countries. One key factor will be the extent to which national policies requiring the dispatch of low‑carbon electricity are rigorously enforced.

Overall, renewable energy‘s longer‑term resilience across the Asia Pacific region‘s middle‑income countriesis uncertain and likely to be quite variable. It cannot yet be said that the pandemic will have enhanced the share of electricity from non‑fossil fuels or non‑hydro renewable sources above pre‑existing trends in the countries studied. That is not to deny that governments might reconsider their strategies for electricity supply once the worst effects of the pandemic are past. 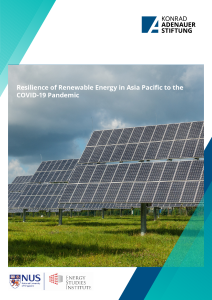