On December 5th and 6th, the Konrad-Adenauer-Stiftung organized a plenary conference titled "Judicial independence under threat?" at the Council of Europe in Strasbourg, France. This conference brought together distinguished sitting and retired Supreme Court justices, lawyers and experts from five Rule of Law Programme regions to discuss the outcome of the one-year series of conferences and workshops on judicial independence. Most of the speakers in Strasbourg took part in the regional events. We selected Strasbourg as the place of the conference especially because of the work of the Venice Commission in the sphere of judicial independence. Our sincere thanks to the Council of Europe for allowing to use their premises for the conference. ​​​​​​​ 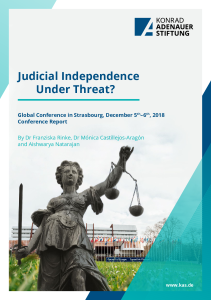