Late September almost 130.000 Emiratis were called to the ballot box to cast their vote for the 20 candidates to be elected to the Federal National Council (FNC). This was only the second time that elections were held in the UAE. How significant they were for the country was topic of discussion at a conference jointly organized by KAS Regional Program Gulf-States and Zayed University on October 20th 2011. Newly elected FNC candidates, well-known Emirati commentators, and campaign communication experts analyzed the media coverage as well as the election process in two separate panels.
October 23, 2011 Ordering Information 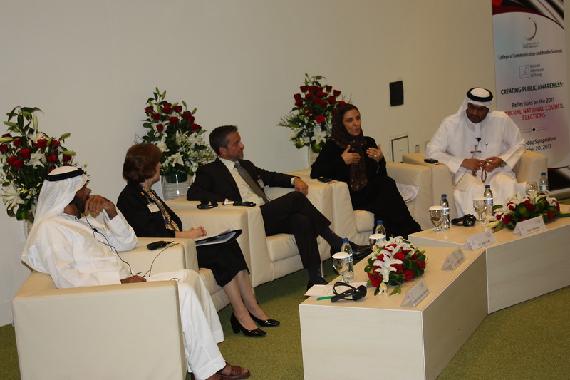 KAS Regional-Programm Golf-Staaten
The panelist debated intensly about the mandate of the media to educate the public and engage them into a policial discourse. 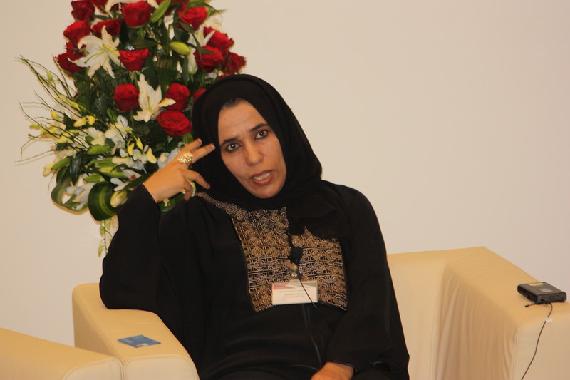 KAS Regional-Programm Golf-Staaten
Sheikha Eisa Ghanem Al Ari was the only female candidate to be elected into the UAE Federal National Council. 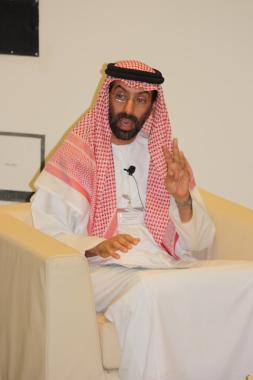 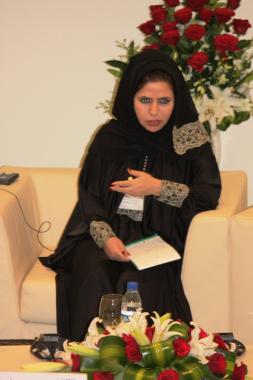 KAS Regional-Programm Golf-Staaten
Dr. Ebtisam Al Ktibi, political science professor at the UAE-University in Al Ain, advocated to strengthen the FNC mandate as a supervisory board rather than an advisory organ to the government. 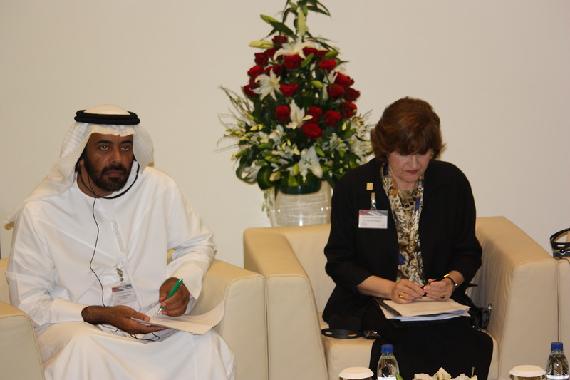 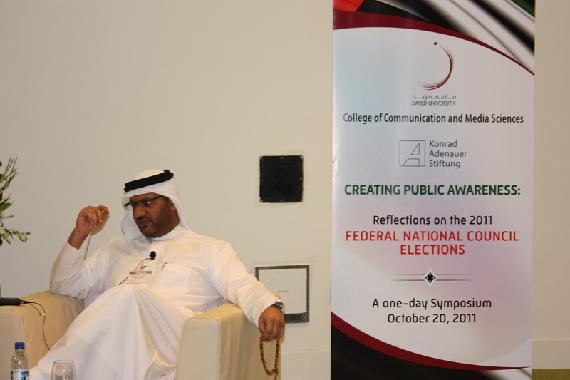 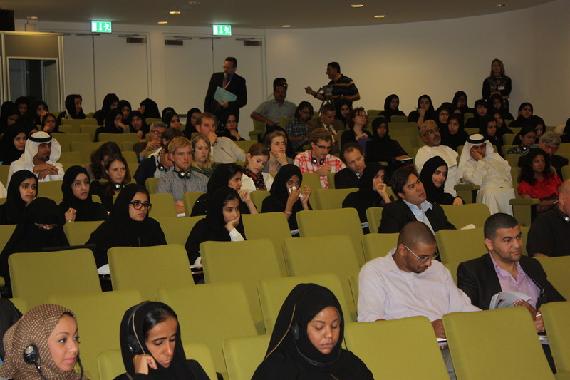 KAS Regionalprogramm Golf-Staaten
Almost 150 people followed the invitation by KAS and Zayed University and listened to the discussions. Many of them seized the opportunity to twitter the conference procedures live (#CPA11). 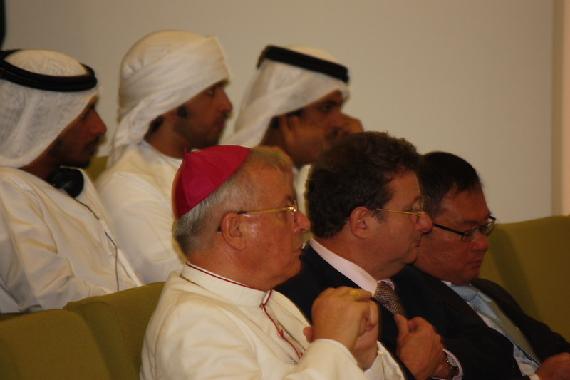 It was the first time in the history of the UAE that members of the FNC engage in a public discussion about their future role in the country’s political system.

Salem Mohammed Al-Ameri, one of the newly elected FNC members from Abu Dhabi, explained, that he attributes his successful campaign on the fact that he did not solemnly rely on traditional media such as newspapers and local TV stations. He actively campaigned also via Facebook and Twitter. Dr. Marilyn Roberts, Dean of the College of Communication and Media Sciences at Zayed University, supported this argument: „The key to success in any political campaign is a comprehensive campaign strategy. In the recent elections the candidates had to make themselves and their agendas known to the public in a very short period of time. The social media were especially important when reaching out to young voters“.

FNC- candidate Nasser Hassan Al-Shaikh criticised the short campaigning period: „We had only three weeks to contact the voters.“ Time was too short for him - like most of the 500 candidates he was not voted into the FNC. However, strategic campaigning and a large number of campaign volunteers were not the only important factors to success. The candidates also needed the necessary financial means as Al-Ameri admitted: „TV-adds are very expensive.“ Not every candidate could afford to pay for them.

Many candidates heavily criticized the lack of media coverage prior to the elections. Diana Hamade, layer and freelance journalist stated: „To know that elections were about to take place you needed a crystal ball. The local media hardly dealt with the topic. The only day they really paid attention was on election day.” Nasser Al-Shaikh agreed and said that many voters did not even know what the duties and rights of the FNC really were. A young journalist agreed that electronic media coverage fell short of expectations in the audience but noted that the newspapers reported extensively on the elections.

The fact that most media in the Emirates is owned by the government poses the question how much their coverage policy had been influenced by the latter. Dr. Matt Duffy, Assistant Professor at the College of Communication and Media Sciences at Zayed University, and moderator of the first panel, stated that there has to be a clear separation between reporting and advertising.

The second panel focused on the Federal National Council and its challenge to raise the public’s interest in issues of national importance. Sheikha Eisa Ghanem Al Ari, the only female to be elected into the FNC, highlighted that her success was based on her rather high degree of popularity. As her affinity to politics had not been very strong she had never considered running for office. Not until many of her friends and relatives suggested to her to become a candidate did she contemplate about campaigning. "If such a request is being voiced amidst your community one does start looking into the possibilities.” Once she had decided to run she was convinced she would be successful. "From the very beginning I felt I would be a winner." She did not run a comprehensive media campaign as she was already very well known in her community.

According to Dr. Ebtesam Al-Ktebi, Political Science Professor at the UAE-University in Al-Ain, the media played a critical role in raising public awareness about political events in the country. However, the necessary information needs to come from the political players themselves – an area where Dr. Al-Ktebi saw a lot of room for improvement. She emphasized the importance of continues reporting on the members and work of the FNC also after the elections: "The public needs to know how their elected representatives perform in political debates.”

Ahmed Shabeeb Al Dhaheri – Former Deputy Speaker of the FNC– agreed with Dr. Al-Ktibi and said that transparency is the key prerequisite to engage in an open dialogue with the public. Adding to that Sheikha Eisa Ghanem Al Ari pointed out that the current webpage of the FNC (http://www.almajles.gov.ae) has many pre-election posts but falls short in informing the public of the actual work that is being done in the FNC.

Mishaal Al Gergawi, journalist and current affairs commentator, reminded that despite the media’s mandate to inform the public, it is up to the people themselves to develop an interest and understanding for politics and to engage in public discourse. Education and a stronger national identity played an important role in achieving a greater voter turnout in the next elections in 2015. “If we invest into these two areas we will see a stronger public engagement in the next elections.”