The Rule of Law and the Right to Vote

The study is analyzing three Arab countries, Lebanon, Tunisia and Egypt amidst the political transformations that have been endured respectively since 2005 and 2011.
March 1, 2018 Ordering Information

As among the civil and political rights, the right to vote represents a paramount feature to ensure a direct participation of citizens to the course of their country's destiny in a democratic setting, and prevent any infringement on their basic rights and freedoms.

When organized in a fair and democratic manner, regularly held elections ensure proper political representation of the societal corps, hence allowing citizens to hold their elected leaders accountable. In the Middle East, elections are generally dismissed as a charade, which disregards the basic democratic principles, before the Arab Spring wave brought some new perspectives to the electoral and democratic process. Nevertheless, countries like Lebanon witnessed a serious setback as the right to vote in a general election was exercised last in 2009 since the elections were postponed at three different occasions. Only local elections were held throughout the country in May 2016. Based on the current political situation, Lebanese should be able to vote once again in a parliamentary election next May, after 9 years of interruption. During the same period, Tunisia had held, following the massive protests against the sitting regime, two rounds of elections, one in 2011 for the Constituent Assembly and Legislative elections in 2014. Similarly in Egypt, two rounds of presidential elections were organized, in 2011 after the outing of President Moubarak, then 2014 after the coup d'Etat of the Army against President Morsi. 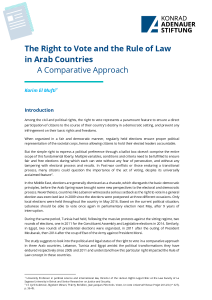