The focal point of the conference that was organized by NDU was the relevance of More’s “Utopia” for current issues of religion and the philosophy of law. The contribution of Peter Rimmele, director of the Rule of Law Program Middle East/North Africa, was entitled “Would we like to live in Thomas More’s Utopia?”

In the presence of the Apostolic Nuncio to Lebanon, Archbishop Gabriele Caccia, and a broad audience represented by the Faculty of Law and Political Science as well as the Benedict XVI Endowed Chair of Religious, Cultural and Philosophical Studies, Peter Rimmele analyzed aspects of law, justice and equality, drawing several comparisons between More’s Utopia (1516) and respective laws in the modern German and Lebanese rule of law. Main topics were human rights and individual liberty when it came to slavery and terminally ill persons, or gender equality as well as equality of right for persons of different nationalities.

Private property, which is strictly forbidden in Utopia, was another important issue that was highlighted. The presentation engaged in a comparison between communist systems and social market economies, including perspectives of British Author Paul Mason (b. 1960) on the post-capitalistic era of information technology. Rimmele also offered some considerations on the experience of the Anglo-American case law system versus the civil law system applied in Germany.

According to Rimmele, a strong faith in a better world remains despite the failure of several attempts to implement ideas similar to Thomas More’s Utopia, such as the “New Harmony” model of the British visionary Robert Owen (1771–1858). The closing remarks quoted Jürgen Habermas (b. 1929), one of the most influential German sociologist and philosopher in the tradition of critical theory and pragmatism: “When all utopian oases dry out, triviality and helplessness remain”. 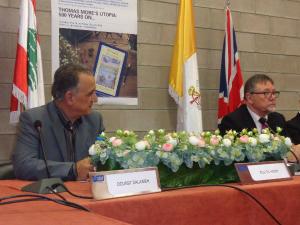 KAS Libanon (c) 2016
Peter Rimmele, Head of the Rule of Law Program for the Middle East and North Africa of the Konrad Adenauer Foundation, at the conference