As part of his state visit to Germany, Lithuania’s President Gitanas Nausėda paid a visit to KAS to engage in talks.
September 16, 2021 Ordering Information

On the occasion of the 30th anniversary of German-Lithuanian relations in 2021, Lithuanian President Gitanas Nausėda visits Germany. On 15 September 2021, he held talks with Norbert Lammert, Head of the Konrad Adenauer Foundation, and Deputy Secretary-General Gerhard Wahlers.

Nausėda emphasised Germany’s importance as a strategic partner to Lithuania in multi­lateral forums such as the EU and NATO. He further pointed out that the strong bilateral partnership was based on common values, in particular a shared commitment to democracy, human rights, and a strong Europe: “30 years ago, the Konrad Adenauer Foundation took up its work in Lithuania, where it greatly contributed to the emergence and advancement of civil society. Today, I am very happy that we are ready to share our experiences with the countries of the Eastern Partnership and to support civil society in these countries in close cooperation with the Foundation”, the President said. 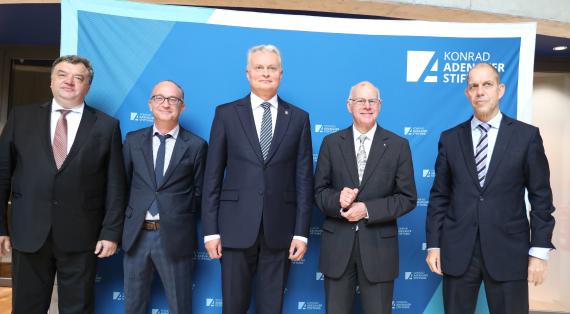 Norbert Lammert equally highlighted the special significance of the bilateral relationship: “Lithuania and Germany are characterised by a particularly close partnership – also because our countries have a lot in common, not only economically and politically, but also lingu­istically, culturally and historically. The amicable and trustful cooperation with our partners in Lithuania and the Baltic States will stay close to our heart in the future. The Ade­nauer Foun­dation will continue to stand by Lithuania via its work on the ground as well as in Germany.”

Apart from bilateral relations, the talks focused on the future of European integration and current developments in Belarus. The global role of Russia and China as well as transatlantic relations were also discussed. On Thursday, Nausėda was received by Federal Chancellor Angela Merkel and President Frank-Walter Steinmeier.

Already since the beginning of the 1990s, the Foundation has been active in the Baltic States. A particular focus of its work in Lithuania lies on issues of foreign and security policy. Since Lithuania’s independence, the country program for the Baltic States has been supporting political dialogue – particularly with regard to youth participation – as well as the evolution of democracy and political parties in the country.