'We want what's ours'

Land dispossession occurring in South Africa during colonialism and apartheid is a quintessential example of ‘dignity takings’, which involves the deprivation of property and also dignity.
August 25, 2014 09.00 - 13.00 Clock

There have been numerous examples of dignity takings throughout the world, but South Africa stands apart because of its unique remedial efforts. The nation has attempted to move beyond the more common step of providing reparations (compensation for physical losses) and to instead facilitate ‘dignity restoration’, which is a comprehensive remedy that seeks to restore property while also confronting the underlying dehumanization, infantilization, and political exclusion that enabled the injustice. In We Want What’s Ours, Bernadette Atuahene’s detailed research and interviews with over one hundred and fifty South Africans who participated in the nation’s land restitution program provide a snapshot of South Africa’s successes and failures in achieving dignity restoration. 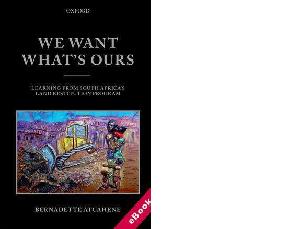