Thailand and many countries are developing smart city initiatives aimed at improving the quality of life, optimizing the efficiency of city management, and developing information societies. The smart city concept has become quite popular in recent years, and the buzzword has taken on added cache in Southeast Asia, with Singapore recently proposing a Smart Cities Network to enhance connectivity between urban centers during ASEAN summit in 2018. As such, it is important to review the development of smart city policies and reflect upon the readiness and capacity for developing states to embrace such policies. To formulate the effective policy, we have to discuss the history of Thailand’s smart cities policies, casting a critical eye on their emergence. We show that the current top‐down implementation of the policy has struggled to find the root. At the same time, we demonstrate through the example of some cities that an approach linking bottom‐up demand with state resources can be more promising. We contend that in order for Thailand’s smart cities policy to be effective, the needs of citizens need to be better represented in policy design and formulation, which will likely require greater citizen participation in the policy process.

Today, smart cities have become a nationwide policy in the Thai context. This rapid adoption of the policy language is consistent with policymaker’s observation that the smart city project is part of a larger goal of making Thailand, as a whole, a smart country. All three of the initial pioneering smart cities in Thailand (Chaing Mai, Phuket, Khonkean) were designated by the central government. On the positive side, all three provinces were able to garner financial and technical support from the central government.

On these awareness, Konrad Adenauer Stiftung in cooperation with Institute of Democratization Studies provides the discussion on “Nakhonsawan Smart City in 2021: Direction, Implementation and Challenges” to Thai society as a proposal to understanding the concept and practice of Smart City framework. 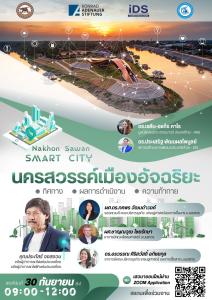