by Kristen Soltis Anderson, Patrick Ruffini, Kai Chen Yeo
Many look to the United States as bellwether for international political trends. Thus we asked the experts at Echelon Insights to examine the key factors which currently and likely will influence U.S. domestic politics for the foreseeable future. This report takes a forward looking view examining the salient and less-obvious ways these factors are shaping shifts in public opinion, social trust and faith in democracy, political polarization, and how American' perceive their place in the world.
December 13, 2021 Ordering Information

Much analysis looks at the next election cycle, or the duel between the two political parties in a short-term context, but this report aims to look at the way demography and shifting public opinion can give us a glimpse into American politics a decade or two in the future. Many changes in society and culture have been developing for years if not decades that are now beginning to influence politics. Americans with more education are moving to denser areas, reshuffling divides as well as the political balance of power across the country. Increasing racial and ethnic diversity is also having some unexpected effects on who wins elections and what issues become dominant. Younger generations are clamoring for influence against the backdrop of an aging society and cultural clashes are arising anew as, particularly the political right, is reorienting around these clashes.

The views, conclusions and recommendations expressed in this report are solely those of its authors and do not reflect the views of the Konrad-Adenauer-Stiftung, or its employees. 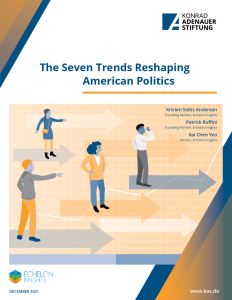 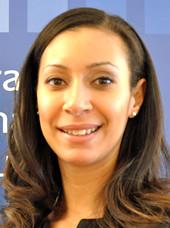