A conversation with Philipp Mißfelder MdB

Political insiders and policy experts discuss the upcoming U.S. presidential election with Philipp Mißfelder, Member of the German Bundestag. Topics included strategy and issues in the Republican primary, and its impact on the general election.
February 15, 2012

German and American political insiders and policy experts assembled on February 15 to discuss the upcoming 2012 U.S. presidential election with Philipp Mißfelder, Member of the German Bundestag. In a roundtable discussion, ideas and opinions were candidly exchanged about strategy and the issues at the heart of the Republican primary, as well as the primary’s impact on November’s general election. Mr. Mißfelder is a member of the Foreign Affairs Committee and the Christian Democratic Union’s elected foreign policy spokesman. 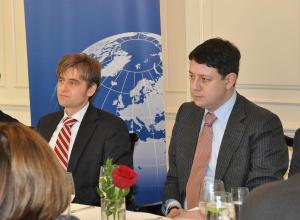 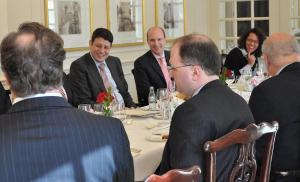 KAS office
Attendees at a roundtable discussion with with Philipp Mißfelder MdB exchange views on the 2012 U.S. presidential election, its impact on foreign policy, and its coverage by media in Germany.