Looking to begin the New Year with fruitful transatlantic debate and discourse the Konrad-Adenauer-Stiftung hosted a reception at which KAS London Director Hans-Hartwig Blomeier led the discussion over a potential “Brexit” and many of its consequences. Sixty experts from think-tanks, government, and the private sector joined Mr. Blomeier in engaging the pertinent questions of EU reform, geopolitical implications of a “Brexit,” and more.
January 22, 2016 Ordering Information 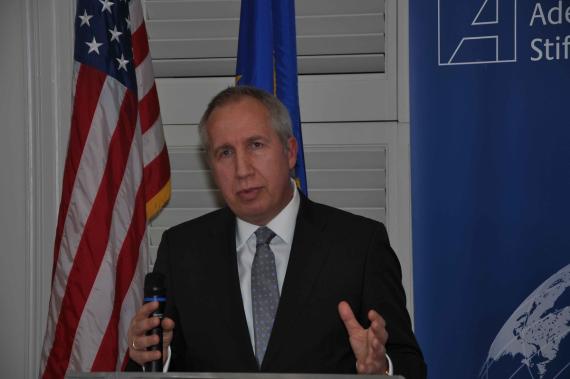 KAS Washington
The director of the KAS office in Great Britain, Hans-Hartwig Blomeier gives an overview of the consequences of a possible "Brexit". 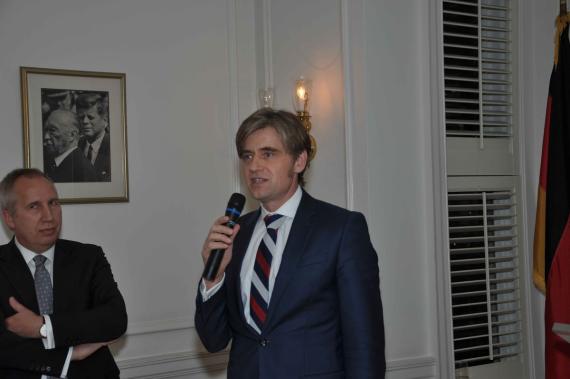 KAS Washington
KAS Washington Director Dr. Lars Hansel on the challenges of the trans-atlantic agenda in 2016.

In or out? This is the emotion laced question that all United Kingdom citizens, who live on the island, will have to ask themselves, once Prime Minister David Cameron officially decides the date of the referendum to the question: Should the UK remain a member of the European Union. Mr. Cameron wished to enact deep reforms to the EU which could have fundamentally changed the goals of the European project, however more recently he has settled on four demands, or baskets, as they are referred to, which are more attainable and less impactful upon the EU. Recognizing that the prospect of an exit can be used to exert pressure on other states to support his reforms, and that a successful reform campaign will help placate the Eurosceptics within the UK, Mr. Cameron has gone on the offensive, publically promoting the In campaign while pushing for reforms to the EU with leaders on the continent.

The effect of a “Brexit” will reach beyond the EU and include the United States. While the implications for Europe will be far greater than for the U.S., the Obama Administration has loudly expressed its wish that the UK remain a member of the EU. The Special Relationship, despite being temporarily tense, has always served as a conduit to Europe for the United States. The U.S. also believes that the EU is stronger with the UK. The EU provides the largest block of allies to the U.S. and a “Brexit” would make both individually weaker, a situation that is not in the interest of the United States. It is within this context that the guests from think-tanks, government, and the private sector engaged with KAS London Director, Hans-Hartwig Blomeier.

In his speech to commence the evening’s discussions, Mr. Blomeier illustrated that it is in the interest of both the UK and the EU to remain a unit. There are several factors that will play a decisive role in whether the UK ultimately decides to renounce its membership in the EU, as Mr. Blomeier understands the situation. Can Mr. Cameron appear to have successfully negotiated reform with the EU, allowing him to sell a sense of autonomy and assertiveness to British citizens while remaining one of twenty-eight nations? The UK is pursuing a reform that will allow denying migrants social benefits for four years after arrival. Should he secure this reform, Prime Minister Cameron can use it to sell his negotiations as a success. As Mr. Blomeier explained, 80 percent of Britons consider this to be a very important issue, believing that migrants flock to the UK in search of welfare assistance despite economic data showing otherwise. He also explained that the vast majority of migrants enter the UK to work and will continue to enter despite no access to immediate benefits. This reform demand has evolved from wanting to prevent the free movement of labor between EU member states, a non-starter for many in the EU, to the less divisive and attainable benefit reform. Crucial will be the securing of these reforms and Cameron’s ability to sell them as significant, despite some being more symbolic than substantive.

Director Blomeier also went on to stress the emotional nature of the entire action and how these emotions will play a significant role in the outcome - a battle between emotion and fact. Those campaigning for an Out decision are driven, fanatical, and fully able to play upon the popular fears that have emerged across Europe in the wake of the Paris Terror attacks and with the mass influx of refugees from the MENA region. It is the In campaign that is hard pressed to generate the same level of interest and fervor, for Britons have never felt overly European, and thus cannot passionately make the case to stay. The ability to curate an emotional narrative will also influence the voter turnout for the referendum. It is assumed that the best time to hold the referendum, for the In campaign, will be in June of this year. Even with Cameron’s ability to strategically decide when to hold the referendum, the In campaign could have an issue turning out voters, who although support remaining are not personally vested enough to show up to the ballot box. Lastly, there can be any number of external factors, weather, terrorist activity, a bad sporting result, which may have a negative impact on voter turnout, benefiting the Out campaign.

Citing polls that show a populace split 50/50 over the referendum, and betting odds that slightly favor the Out campaign, Mr. Blomeier described a challenging road for Mr. Cameron and the In campaign while underscoring the need for the UK to remain at the heart of Europe. The participants, many of whom directly work to develop the transatlantic relationship, actively engaged with one another and Mr. Blomeier discussing his findings and offered an American perspective on this European issue. It is the goal of the Konrad-Adenauer-Stiftung to promote this type of exchange among transatlantic stakeholders by providing them with the forum and content to mold, set, and promote a transatlantic agenda.

Brexit or Not - Reshuffling of the European Union?