Trouble around TTIP and who will be the next President?

U.S. experts and aspiring German journalists are discussing the trade agreement and the presidential campaign 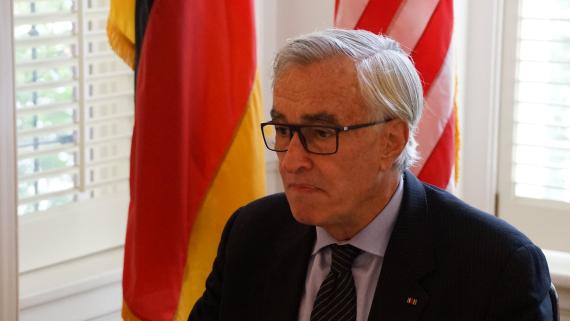 JONA, Jasmin Off
Dr. Charles Ludolph at the Konrad-Adenauer-Stiftung office in Washington 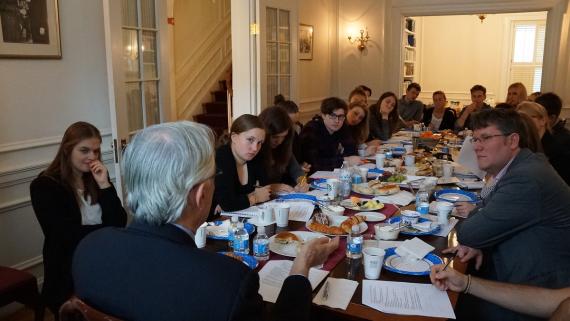 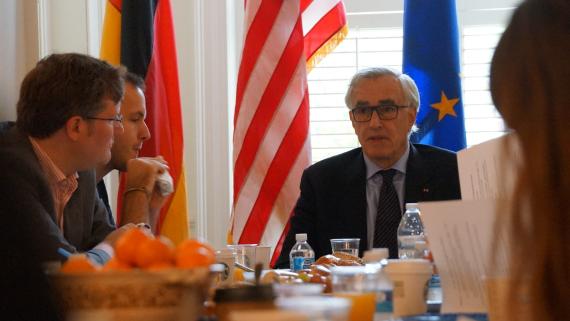 Why are hundreds of thousands protesting on the streets of Germany against TTIP (Transatlantic Trade and Investment Partnership)? Why do negotiators on both sides of the Atlantic want to move it forward? What good will TTIP bring? Does it stand a chance to become reality? Those were some of the questions posed by twenty young journalists to Dr. Charles Ludolph.

The group was on a fact finding mission in Washington and took part in a workshop at the office of the Konrad-Adenauer-Stiftung about the transatlantic trade agreement and the 2016 U.S. presidential elections. All participants are fellows with the KAS journalism academy JONA.

Dr. Ludolph, a veteran international trade expert, experienced in transatlantic negotiations, is a business advisor and consultant. He gave an overview over TTIP and explained the advantages of such an agreement. “Taming” globalization and strengthening the economic ties between Europe and the U.S. to bolster competitiveness with Asia. Streamlining regulations and tariffs would simplify trading. It would free control agents to concentrate on Asia-Pacific countries, especially China.

It all comes down to trust, according to Ludolph. Without trust between the negotiating parties, there can’t be an agreement. The expert considered TTIP even more important, as international trade has slowed and for the first time since 1930 is growing more slowly than the global GDP, so Charles Ludolph. This should be a reason for concern. The trade agreement would make a friendly climate for companies, create new jobs and strengthen consumer protection rules. Asked, what Americans think of TTIP, he said that it is viewed mostly in a positive light. But Dr. Ludolph predicted that there won’t be a deal before 2017. He thinks TTIP will happen during the administration of the next president.

The upcoming presidential elections were topic of the second part of the workshop with political consultant Soren Dayton and Washington reporter Emily Schultheis.

Both gave an overview of the Republican and Democratic candidates. While the Democratic field has left only three candidates in the running – Hillary Clinton, Bernie Sanders and Martin O’Malley – the Republican side is crowded with presidential hopefuls.

Emily Schultheis covers Hillary Clinton for the National Journal. In contrast to Clinton’s 2008 campaign against Barack Obama, when she grew too comfortable and complacent, which led to her downfall, according to Schultheis, Hillary is working hard to strengthen her position as front runner. The reporter gives candidate Clinton high marks for her showing during the televised debate and the Bengazi hearings on Capitol Hill.

Soren Dayton gave his assessment of the numerous Republican candidates. Currently the Baltimore neurosurgeon Ben Carson and billionaire Donald Trump are leading the polls. But there is much time until the first vote is cast in the Iowa Caucus in February, so Dayton. The candidates have plenty of campaign stops and debates ahead of them. Next to political outsiders Trump and Carson, Senators Marco Rubio (Florida) and Ted Cruz (Texas) are in the race, together with former governor of Florida Jeb Bush and five additional candidates, who rank low in the polls. Asked who he would like to see as GOP candidate, Dayton said that Marco Rubio might have a good chance of winning the nomination. Rubio, whose family has immigrated from Cuba, is viewed favorably by many Hispanic voters. Carson draws support from the powerful religious conservative right. But Dayton warned that Trump needs to be taken seriously. He has enough money and a solid campaign organization to be in it for the long term. Schultheis added that the Democrats would be pleased to have their candidate running against Trump.

Asked why money is such an important factor in U.S. campaigns, the experts replied that it is surprising how little money is used in European election campaigns. It is not only expensive to pay for the ubiquitous TV spots in the U.S. but also to build a campaign organization and presence in all 50 states, so Dayton and Schultheis.

The young journalists were very interested in the roll of social media in the presidential campaign. Social media platforms are heavily used by all candidates and Facebook, Twitter and direct email marketing are changing the face of modern political campaigns for good.