dari Jan Senkyr
Indonesia has been hit hard by the COVID-19 pandemic. The number of infections has risen rapidly in recent weeks, the positive rate in tests and the number of deaths caused by the COVID-19 virus are the highest in Southeast Asia. With a cabinet reshuffle, President Joko Widodo now wants to improve the government’s position in handling the pandemic and its economic and social consequences.
2021 Januari 13 Informasi pemesanan 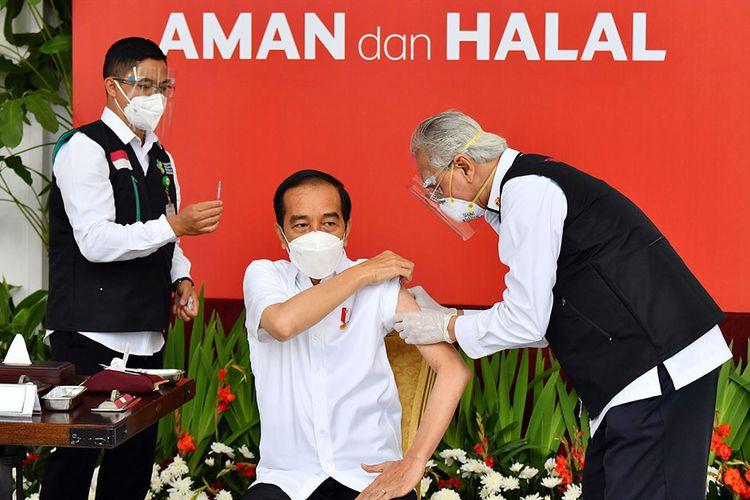 At the end of December, the positive rate of COVID-19 virus tests reached 22 percent, putting Indonesia in fourth place compared worldwide. A total of around 780,000 infections and 23,000 deaths have been registered so far, the daily number of new infections is 9,000. The capacity for tests is very limited, with 260,000 tests per week Indonesia (269 million inhabitants) just barely achieves the minimum rate of 1 test per 1000 inhabitants recommended by the WHO. Experts therefore assume significantly higher real infection numbers.

A particular weakness in fighting the pandemic is the inadequately developed health system in many parts of the country. The bed occupancy rate in hospitals (bed occupancy rate - BOR) reached 64 percent in a nationwide comparison in December, and in the most populous city of Jakarta it is now 85 percent. This has almost reached the limit of the health system's resilience.

To curb the spread of the virus, mobility restrictions have been introduced across Indonesia. The capital Jakarta, but also other densely populated provinces on the island of Java and Bali have partially imposed curfews and the borders with other countries have been closed until further instructions.

Because of the critical situation, President Joko Widodo restructured his government team at the end of 2020. Six ministers were replaced and a number of deputy ministers were appointed. With the reshuffle of the cabinet, the president, who is in his second and final term in office, is also reacting to some corruption scandals and to mistakes in dealing with radical Islamist groups.

The Indonesian media rated the replacement of the health minister as the most important. The previous incumbent Terawan Putranto, a retired army general and military doctor, did not get the corona crisis under control with a poor performance and a lack of competence. President Widodo was also angry about the slow and inadequate procurement of vaccine to immunize the 269 million Indonesians.  The previous Vice Minister for State Enterprises, Budi Gunadi Sadikin, was therefore appointed as the new health minister. With his experience as a former top bank manager and head of the national task force for economic recovery, his main task will be the successful implementation of the national vaccination program and the improvement of the infrastructure of the hospitals. He is the first with non-medical background to hold this ministerial post.

The appointment of Tri Rismaharini as the new Minister for Social Affairs attracted media attention. The extremely popular previous mayor of Indonesia's second largest city, Surabaya, is replacing Juliari Batubara, who was arrested by the anti-corruption authority KPK in December 2020 for allegedly embezzling aid funds for the consequences of the corona crisis. Tri Rismaharini is considered a possible candidate for the next presidential election in 2024 and, like President Widodo, belongs to the PDI-P party (Indonesian Democratic Party of Struggle). Her promotion to the ministerial post received positive media feedback.

Also linked to a corruption scandal is the personnel changes in the leadership of the Ministry of Fisheries. The previous incumbent Edhy Prabowo was arrested by the KPK in November 2020 for allegedly accepting bribes for the issuing of export licenses for lobster larvae – an important export item for Indonesia. He is considered a close confidante of Defense Minister Prabowo Subianto, who twice ran unsuccessfully as a challenger to Joko Widodo for the office of President.  Ex-General Prabowo - not related to Edhy Prabowo - is chairman of the Gerindra party. After the election defeat in 2019, Gerindra joined to the government camp and now supports the broad coalition of President Widodo. The new fisheries minister Sakti Wahyu Trenggono was previously vice minister in the Ministry of Defense under Prabowo and comes from the entrepreneurial sector.

The previous Ambassador of Indonesia to the USA, Muhammad Lutfi, has taken the lead in the Ministry of Commerce. After a year, he replaces the unsuccessful Agus Suparmanto from the PKB party (National Awakening Party). As an up-and-coming young politician, he held the post of Minister of Commerce for a short time in 2014 under the then President Susilo Bambang Yudhoyono. Lutfi is closely linked to the business sector, which could potentially lead to a conflict of interest.

Another prominent representative of the young business elite, Sandiaga Uno, has become the new Minister for Tourism and Creative Industries. He replaces the journalist and media expert Wishnutama, who did not meet the president's expectations, especially when it came to supporting the tourism sector, which is important for Indonesia and has been badly affected by the corona crisis. Sandiaga Uno successfully ran as deputy at the side of Anies Baswedan in 2017 against the then governor of Jakarta Basuki Purnama, known as Ahok. The election campaign was overshadowed by Islamist propaganda and protests against the ethnic Chinese and Christian Ahok. After a conviction for alleged blasphemy, Ahok had to serve a two-year prison sentence. Basuki Purnama is currently chairman of the board of the state-owned oil company Pertamina.

The controversial and strongly criticized by Islamic organizations filling the post of Minister for Religious Affairs with an ex-military (ex-General Fachrul Razi) has now been corrected by President Widodo by a new appointment. With Yaqut Cholil Quoumas as the new Minister, this office returns to the sphere of influence of the Islamic organization Nahdlatul Ulama (NU). Quoumas was previously chairman of the youth organization of the NU and is a member of the PKB (National Awakening Party, the political wing of the NU). With an estimated 40 million members, the NU is the largest Islamic non-governmental organization in the world and represents a tolerant and moderate Islam.

The new appointment of Minister for Religions Affairs goes hand in hand with the readjustment of government policy in dealing with radical Islamic groups in Indonesia. Especially the militant Islamic mass organization FPI (Front Pembela Islam) is moved into the focus of the Indonesian security forces. FPI was deeply involved in the mass demonstrations against the Christian governor Ahok while the Jakarta gubernatorial elections 2016/17  and is responsible for numerous militant and sometimes violent actions against the state. They reject Indonesia's democratic system and fighting for the implementation of the Sharia law. Co-founder and spiritual leader of the FPI is Islamic scholar with Arabic descent, Habib Rizieq Syihab. After several criminal proceedings were opened against him, Rizieq Syihab fled into exile in Saudi Arabia in mid-2017. He returned to Jakarta on November 10, 2020 and was received by thousands of supporters in a triumphal procession, in which curfew and protective measures against Covid-19 were massively disregarded. When a subpoena for Rizieq Syihab was delivered in early December, there was a confrontation with the police and six FPI members were shot dead. The circumstances are being investigated by the national human rights commission Komnas HAM. On December 29, 2020, the FPI was officially banned by a government decree, however, the FPI leadership announced the establishment of a new organization.

The most important task of the new government will be the successful implementation of the national vaccination program against the Covid-19 virus as well as economic recovery. Indonesia has already received 3 million doses of the Chinese Corona Vac vaccine, the vaccinations are expected to start in the second week of January. To ensure adequate immunity for the 269 million Indonesians, at least 181 million people must be vaccinated. The new Minister of Health therefore expects a need for at least 426 million vaccine doses. So far, 100 million doses have been ordered from four vaccine manufacturers: Pfizer-BionTech, AstraZeneca, Novavax and Sinovac. In addition, there are 16 million doses via the Covax-Gavi international distribution system. The state-owned pharmaceutical company Bio Farma plans to produce 16 to 17 million vaccine doses per week from the Chinese manufacturer Sinovac. President Joko Widodo hopes vaccination across the nation can be completed by March 2022. 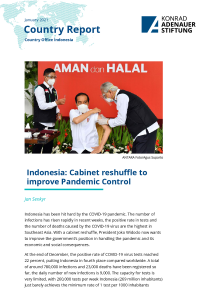