Polish Perspective against the German Background

Although negotiations between the European Union (EU) and the United States (US) on the Transatlantic Trade and Investment Partnership (TTIP) reached their eleventh round (November 2015) their final result is still not advanced enough. It is also not quite clear how long they are going to last. For the public opinion, especially in Europe, one of the most intriguing question is the fact that they are of closed-door character, which is an obvious phenomenon for specialists. At first everything will be negotiated on, without a public debate, and the treaty only will be published, according to the famous rule "nothing is agreed until everything is agreed". For most researchers, however, the essential point is the possible outcome, i.e. which of the three scenarios emerges as a result of negotiations - a customs union scenario, an NTB (non-tariff-barriers) elimination scenario or even a single market scenario. The aim of the following paper is to identify the possible effect of TTIP on the Polish economy where Germany, being the most important economic partner of Poland, serves as a background. The central thesis of the paper is that Poland will basically profit from TTIP. The advantages will encompass stimuli to trade, foreign direct investments, public procurements and lower prices for consumer goods. They will be mainly of indirect character, with Germany as the most important economic go-between, and their general scope will be rather limited, although positive. 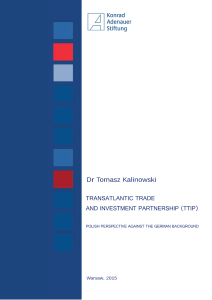 Neighbours Drifting Apart? Poland, Germany and Challenges for the EU