The people of Afghanistan will succeed!" the 91-year-old Zahir Shah told the assembly to applause. The parliamentary and provincial council elections were held on 18 September 2005. Afterwards, the first results were declared on 9 October. Final results were delayed by accusations of fraud, and were announced on 12 November. Former warlords and their followers gained the majority of seats in both the Lower House and provincial councils. Women won around 28% of the seats in the Lower House, six seats more than the 25% guaranteed in the Afghan Constitution which was launched in 2004. Approximately twelve million voters were eligible to vote for the 249 seats of the Wolesi Jirga, the Lower House of Parliament, and the 34 provincial councils.

As MPs in the Lower House continued to discuss the composition of the Independent Commissions and in particular that of the AIHRC, on the 3rd of September discussions almost got out of hand. MPs accused one another of acting selectively on issues. One MP said that while the Lower House wanting to bring the AIHRC and other independent commissions under the scrutiny of the Parliament; it means that MPs don't understand the constitution of Afghanistan. Another MP contradicted this and said to the respected MP that majority MPs understood the constitution. Once again majority MPs were asking for all the independent commissions to get the approval of the Afghan Parliament but only a small number of Lower House MPs opposed this and said that this was against the constitution of Afghanistan. At the end of the discussion, majority MPs voted for the independent commissions to get the approval of the Afghan Parliament in future!

The media law which was approved by the Lower House earlier was also approved with some changes by the Upper House on the 5th of September. The Upper House made changes to the text approved by the Lower House and in accordance with the constitution of Afghanistan, both houses will now form a joint commission to work together and reach a consensus on the articles that they disagree on.

The Head of the Kabul Police Criminal Investigation appeared before the Internal Affairs Commission of the Lower House. He was asked about the factors behind the latest insecurities in the city of Kabul. The Head of the Criminal Investigation said Private security companies created since the end of the Taliban government were behind some of the insecurity in Kabul city. Private security companies have weapons and vehicles and their personal wear military uniforms. The police official said that some of these security companies were behind armed robberies and kidnappings.

Members of the Central Monitoring Commission of the Lower House reported on their recent visit to the province of Bamyan and reported that the people of Bamyan complained about the lack of proper roads and local administrations.

On the 8th of September, the Lower House issued a statement in relation to the football gifts dropped from the air to the children of Khost province by the coalition forces. The flag of Saudi Arabia was on the cover of the footballs and the Kalema (Word), the first pillar of Islam was written on the cover. In the statement, MPs strongly condemned this act of the coalition forces and asked the government to prosecute those behind this act.

The Upper House called in the Minister of Commerce to explain the sudden increase in prices of basic commodities and fuel. The Minister said that a number of factors were behind the sudden increase of fuel and the main reasons were decrease in oil production by the OPEC countries, the increase of fuel tax by Russia and Kazakhstan and the purchase of large quantities of fuel by Iran as never seen before. And inside Afghanistan, a number of companies' store the fuel until the prices go up and a private company's 90 wagon of low quality fuel imported from abroad, were stopped at Hairatan port. The Minister also indicated that the government has taken some measures to help the people by opening its own fuel stations and LPG stores. A number of Senators were not happy with the explanations of the Minister and asked him to do more because the people do face serious problems in acquiring basic food commodities and fuel.

After many weeks of discussions and some MPs threatening to decrease the number of ministries of the government and merge others, on the 15th of September, the Lower House approved the composition or rather the number of ministries and general directorates of the government almost as they were. The office of the Deputy Director of Youth in the frame of the Ministry of Culture that was voted on and removed from the mentioned ministry was once again voted on, and it will now be recreated as an independent Directorate of Youth Affairs. Media reported that MPs did not want to decrease the number of ministries for fear of making a large number of Afghans unemployed. On this day the Upper House discussed the prisoner exchange agreement between Afghanistan and Russia as well. This agreement was approved by the Lower House earlier.

According to the media, Dr. Anwarulhaq Ahadi, Minister of Finance attended the hearing of the Upper House Commission for Financial and Budget Affairs, to brief Senators about the revenues of the year 1385 (2006/7). Dr. Ahadi said the revenues for 1385 were 50 billion and 349 million Afghanis. From the total, 49 billion were spent and the rest were transferred to the budget of the year 1386 (2007/8). He added that the expected revenue for the year 1386 might be about 35 billion Afghanis and in the first six months more than 15 billion has been collected.

The Lower House approved the toll collection law on the 22nd of September. And it also approved the passport law, according to this law; children under 15 years of age will be able to acquire a passport with the consent of parents. Forensic law was approved by the Lower House on the 24th of September. This law has four chapters and 35 articles. On this day, the Upper House approved the bill for formation of a commission to reform the police force. Lower House also discussed the possibility of holding both Presidential and Parliamentary election at the same time.

On the 26th of September, Lower House approved the passport law. The Lower House also discussed the agreement between the Ministry of Hajj Pilgrimage and Religious Trusts and a transportation company based in the United Arab Emirate to fly Afghan pilgrims to Saudi Arabia for Hajj. According to a report presented by Religious Affairs Commission of the Lower House, the mentioned ministry has no right to sign such an agreement.

The complaints hearing commission of the Upper House once again criticized the Minister of Hajj Pilgrimage and Religious Trusts for not attending to the meetings of the mentioned commissions to answer questions on the recent agreement he has signed, the slow construction of mosques and unjust allocation of Hajj visits to the provinces and for not paying the money owed to the national carrier ARIANA by the mentioned ministry.

After this criticism of the mentioned commission in which the head of the commission referred to the respected Minister of Hajj as an outlaw (baghee), the minister held a press conference and said that he knows that in accordance with the constitution he is required to attend the hearings of the Parliament but he could not attend because he was busy. He said that he is not happy with the description of an outlaw and he will be asking the judicial authority to investigate this comment by the head of the Complaints Hearing Commission of Upper House. The minister also said that he was the head of the commission which drafted the current constitution of Afghanistan.

Earlier that week Lower House MPs tried to vote for the remaining 19 members of the commission for monitoring the work of the government. More than 150 MPs nominated themselves but none managed to get the needed votes.

The Lower House also discussed the law for the children's rights and the law of monitoring the implementation of the constitution. The International Affairs Commission of the Lower House after discussing the work of the Ministry of Foreign Affairs requested that the Minister pay attention to administrative, cadres and financial transparency, as well as ensuring national participation in the composition of the Ministry of Foreign Affairs. The mentioned commission also requested the list of all those Ambassadors with dual citizenship. It was said that 27 Ambassadors have dual citizenship and more than 10 are without high education.

The Upper House discussed the need to raise the capacity of the Afghan National Army by providing it with air force and heavy weapons and Senators asked the Ministry of Defense to do their utmost in this regard.

The delegation of the Upper House Environment Commission sent to the north-eastern province of Badakhshan reported that they were not assisted by provincial authorities during their visits there and also criticized the work of provincial authorities in the areas of education, public health and assistance to the victims of floods in this province.

Political parties' law was approved by the Lower House on the 29th of September. According to this law anyone over 18 years of age with 5,000 members can form a political party in Afghanistan, the party can be active at local or national level.

Members of both houses are trying to approve the laws of the nation and monitor the work of the government departments. Since the Lower House delivered the no confidence vote in the Minister of Foreign Affairs a few months ago, for the time being other members of the cabinet and government are heeding the calls of both houses of the Parliament with caution, as witnessed this month when the Minister of Hajj Pilgrimage and Religious Trusts was asked to appear before the Complaints Hearing Commissions of the Upper House. The Minister did not appear, citing work commitments. The Head of the Commission called him an outlaw and the minister called in the media to say that the Head of the Commission didn't have the right to call him and outlaw. The laws of the nation are presented by the government to the Parliament, the relevant commissions with the consultations of other commissions amend the laws and present them to the general session of the Upper or Lower House, after which the Senators and MPs discuss the changes and most of the time approve the laws. 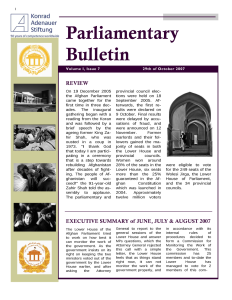