от Nico Lange
Ukraine's president Viktor Yanukovych has significantly strengthened his grip on power in most parts of the country with local elections on October 31st. But international observers criticised the conduct of the elections for not meeting democratic standards.
09 Ноември 2010 информация за поръчка

Ukraine's president Viktor Yanukovych has significantly strengthened his grip on power in most parts of the country with local elections on October 31st. But international observers criticised the conduct of the elections for not meeting democratic standards. Last minute changes to the electoral law and the use of administrative resources in the run-up to the elections significantly affected the results. The Party of Regions will most likely apply the model of the local elections to parliamentary elections in 2012. The negative trends in Ukraine with regard to minimum standards of democracy pose a great challenge for the European Union.

Yanukovych tightens his grip on power

On October 31st, about 35 million eligible voters in Ukraine were given the opportunity to vote on the composition of city, district, and regional parliaments as well as on mayoral candidates. According to the electoral law which had been changed shortly before, one half of the delegates were elected by proportional representation (party lists), while the other half was elected by plurality vote in single-member constituencies. Mayoral candidates were elected by direct vote as well. Due to the complicated mixed electoral system and complex ballots with an extremely high number of candidates, it may be several days before the final results are declared. Preliminary results and exit polls suggest a considerably strengthened position of Yanukovych's Party of Regions with about 36% of the vote, while Yulia Tymoshenko's party “Batkyvshchina” obtained about 13%, Arseniy Yatsenyuk's “Front Zmin” 7 %, the communists 6%, the right-wing extremist “Svoboda” party 5%, deputy prime minister Tigipko's „Silna Ukraina“ 4%, „Nasha Ukraina“ 2%, while socialists, „Yedynyi Tsentr“, and Vitalyi Klitschko's „UDAR“ obtained about 1.5% each. Voter turnout was only about 50 percent - the country's lowest since its independence in 1991.

It is assumed that the Party of Regions' candidates have also won many direct constituencies, so that Yanukovych can now implement a vertical power structure: from the presidential secretariat via the governors he appointed himself as well as regional and local councils controlled by his party's majority down to his own local mayors. It seems that the Party of Regions will also be able to push through their candidates even in the big cities of Kharkiv and Odessa, where the fiercest disputes broke out over irregularities during the ballot count and suspected vote-rigging. One of the surprises of these elections were the poor results of deputy prime minister Sergyi Tigipko's party and the enormous new strength of the right-wing extremist party “Svoboda”, which in some towns and regions in Western Ukraine will even hold the majority. The central election commission expects the final results around November 10th.

The local elections were the first serious test of Yanukovych's democratic commitment after his election as president in February 2010. International observers, Ukrainian experts and opposition parties strongly criticised the conduct of the elections and observed a significant deterioration since the presidential elections. The Ukrainian authorities had issued their invitations to international organisations only very late – too late for an OSCE mission and other larger observer groups to be sent to Ukraine. Many of the short-term observation missions present on election day were unable to provide reliable information because of too few observers, a lack of background information and insufficient awareness of the numerous details. The only systematic large-scale observation was conducted by the civil network OPORA and reported an atmosphere of mistrust and numerous violations of standards of freedom and fairness. OPORA criticised the apparent partiality of territorial election commissions and the uncontrolled mass printing of additional ballot papers in many regions. While the preparation of electoral registers had been far better than before, the elections were further compromised by poorly trained members of the election commissions and a lack of legal knowledge. OPORA and other observers registered a long list of irregularities on election day. For instance, some heads of election commissions took home filled ballots; a computer with voting results burned down in Kharkiv; records signed in blank and already stamped were found; bundles of ballots were handed out of windows. “Election observers” assisted voters inside polling booths, hospitals and medical institutions voted unanimously for particular candidates, ballots were photographed, voters were openly paid for their vote, and observers were arbitrarily denied entrance to polling stations. Due to confusion and legal disputes in the run-up, the wrong ballots were in the wrong polling stations and the names of registered candidates were missing on the lists while candidates no longer registered were still listed.

Even if these violations of the electoral law and the organisational problems were no systematic attempts of forgery ordered from above, they have nevertheless contributed to the failure of the elections to meet minimum standards of democracy. Moreover, many Ukrainian experts suspect that the still running process of vote counting is the most vulnerable phase with regard to manipulations. Particularly in constituencies with close results and in the hard fought cities of Kharkiv and Odessa just a few votes can decide between victory and defeat. Due to the majority of the Party of Regions among the members of election commissions and the small number of election observers it is scarcely possible to control the procedures. Defeated mayors in Kharkiv and Odessa are already protesting against election fraud.

The Ukrainian presidential secretariat issued a first statement admitting flaws and referring to shortcomings of the electoral law. The electoral law and its last minute change had actually been criticised by the observers. However, the key reason for the poor evaluation of the local elections was the extensive use of administrative resources in the run-up to the elections. The ruling majority at first simply adjourned the regular date for the elections, and then later arbitrarily scheduled them for October 31st. Opposition party candidates were often not admitted to election commissions or were again withdrawn from them through legal tricks. As a result, the Party of Regions held a majority in almost all local and territorial election commissions. Impartiality and mutual control were not ensured. Many government employees such as civil servants, teachers, physicians and professors were put under extreme pressure to prevent them from running as candidates for opposition parties. According to some reports they were threatened with the loss of their jobs and even with legal actions against members of their families. Furthermore, civil servants and whole departments and authorities joined the Party of Regions in obscure “mass-joinings”.

Election commissions in the Kyiv, Lviv and Luhansk regions as well as in other areas registered clone parties under the same name as Yulia Tymoshenko’s party “Batkyvshchina” instead of her own original party. In Tymoshenko's traditional strongholds Kyiv and Lviv, where she had obtained between 60 and 70 percent in the presidential elections, her party couldn't even participate in the elections this time. Another example for the use of administrative resources is the registration of the Party of Regions as number one on the ballots in thousands of constituencies, although the electoral law requires a chronological ballot order according to the time of the parties' official registration for the elections.

Considering the use of the administration as described above, the question is why a country with only very low levels of local autonomy would give this high priority to its local elections. Given the president's already existing extensive power, one could also ask why Yanukovych would need to risk his international standing as well as the relationship with the EU and Western partners by manipulating the local elections. Presumably – with the exception of those areas where Tymoshenko's party was prevented from participating – the results would have been more or less the same without any manipulations.

Apparently, for Yanukovych and his party the local elections were all about further fighting Tymoshenko and destroying her party's structures, as well as testing a viable model for the parliamentary elections in 2012. The combination of proportional representation and majority vote is very likely to be applied also to the parliamentary elections. Hereby and by imposing high administrative pressure, the Party of Regions, which for years has been holding a 30-35 percent rating, is trying to create its own stable majorities without having to make any political compromise. The party also significantly benefits from the disagreement and constant quarrels within the national democratic camp. In almost all constituencies ten or more candidates had been put up for election and voters were given the option of voting against all candidates. In many constituencies most of the voters actually voted “against all”; the remaining votes were dispersed among the numerous candidates. Candidates had good prospects of winning a constituency or even mayoralty with only ten or even just seven percent of the votes. Given the low turnout of just 50 percent, the legitimacy of a candidate thus elected and his later acceptability during his time of office is to be questioned.

The former “orange” camp clearly has been taught a lesson and has to pay for its quarrelsome and uncoordinated behaviour. Their competing candidates facilitated the victories for the Party of Regions and for the right-wing extremist party “Svoboda” in constituencies with majority vote. With a little cooperation the opposition easily could have won these constituencies. Whether parties such as Batkyvshchina, Front Zmin, Nasha Ukraina, Narodnyi Rukh, Yedynyi Tsentr, CDU of Ukraine, European Party and others have learned their lesson and whether they will finally come to terms with each other and demonstrate coherence remains to be seen. The local elections have shown quite plainly that a marginalisation of the opposition in the next parliamentary elections is imminent if they cannot find common grounds.

The authoritarian tendencies within Ukraine pose a growing challenge for the European Union. Just before the local elections, while negotiating an association agreement and visa-free travel between the EU and Ukraine, the EU Commissioner for Enlargement and Neighbourhood Policy Stefan Füle had declared that the EU was not going to compromise on democratic standards. While several members of the EPP, among them Elmar Brok, Wilfried Martens and Michael Gahler, criticised the elections and the political developments they revealed, Catherine Ashton, the EU's foreign policy chief, expressed her concern about the violations of standards during the elections only after a clear statement form the US government. So far, the EU's performance as crucial player in Ukraine with responsibilities for the countries of the Eastern Partnership has been very hesitant.

A clear EU statement about Ukraine's democracy at the EU-Ukraine summit on November 22nd as well as a resolution by the European Parliament would send an important signal to Ukraine's politicians, civil society and mostly pro-European population. Naturally, the EU wants to sustain cooperativeness, secure its own influence and to proceed with Ukraine's association. However, if Ukraine's European partners don't speak out on democratic standards, they will lose the respect of the country's elites and risk their credibility with the reform-oriented and democratic forces in Ukraine. 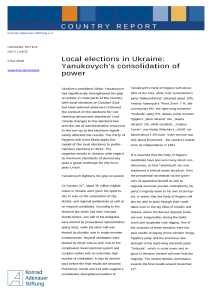