Carbon Leakage: A serious threat or a loophole for industries?

Experts debated on one of the main points of contention in the political discussion about an EU ETS-reform: Carbon Leakage. Does it stand for a genuine threat for carbon- and trade-intensive sectors or is it overstated, permitting companies to escape constraints on greenhouse gas emissions?
10. Juli 2015 Bestellinformationen 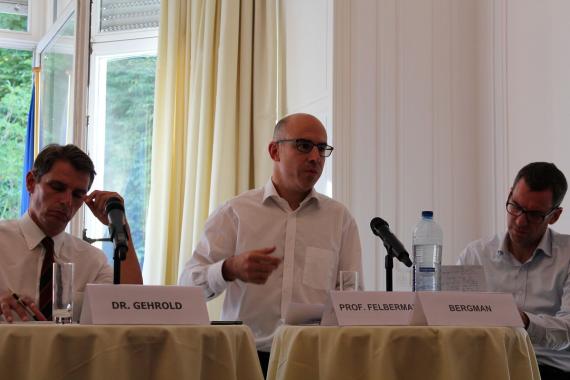 KAS
CARBON LEAKAGE: A SERIOUS THREAT OR A LOOPHOLE FOR INDUSTRIES?

On one of the hottest days of the year representatives of the European Institutions, NGOs and academia met in the European Office of the Konrad-Adenauer-Stiftung to debate on carbon leakage. This alleged threat for industries has become one of the main points of contention in the political discussion about an EU ETS reform. Although the European Parliament eventually endorsed the new carbon leakage list of the European Commission for 2015-2019, a significant number of MEPs have opposed the proposal. With regards to COP21, climate activists argue that the current policy of the European Union sends a wrong signal to the world by excessively shielding the industry from climate constraints. In order to clarify this controversial topic, our panel tried to answer the question whether carbon leakage represents a genuine threat for carbon- and trade-intensive sectors or if it is overstated, permitting companies to escape constraints on greenhouse gas emissions.

The panel discussion started with an introductory statement by Sam Van den Plas, Policy Officer at WWF European Office. He underlined how timely the event was. A few hours before the event started, a draft copy of the Commission's new carbon leakage list for the years after 2020 was leaked. Before expressing his personal point of view, Mr. Van den Plas defined 'carbon leakage' as a shift in production which was caused by carbon pricing. The term, therefore, links climate policy to a weakened competitiveness and – to a certain extent – even economic decline. For the WWF-representative ETS has generated a vast oversupply of emission allowances over the last 10 years. As result, many climate goals set by the European Union were not reached. Mr. Van den Plas argued that debates on climate policies are often dominated by the fear that the economy will suffer and jobs will be lost. However, in reality there is still no genuine evidence for carbon leakage and other so-called economic threats. According to him, the whole ETS concept of free allocations is based on an enormous overestimation of the development of carbon prices, for which the European tax payers will eventually pay the bill. In the end, this system allows the industry to generate large windfall profits, earned from the pass-throughs of CO2 opportunity costs to the power price. Mr. Van den Plas, therefore, concluded that economic drivers are behind the current carbon leakage policy. He called for a global solution of the so-called threat which also takes the policies of other countries into account and is thus creating a worldwide system.

In contrast, Prof. Gabriel Felbermayr (Director of the Ifo Center for International Economics) explained that one can actually find evidence that certain industries are exposed to the risk of carbon leakage. He has conducted several studies on his own, including a recent empirical analysis of the carbon content of bilateral trade. According to Professor Felbermayr there is enough data available to determine both, the carbon footprint of a country and its territorial emissions. By analyzing these two figures, different growth rates of carbon emissions and carbon footprints can be detected. While the overall amount of emissions has (at least partially) been reduced by systems like the ETS, the CO2-footprints augmented. This phenomenon is being caused by an increase of trade volume with countries that do not have climate commitments (such as China) and by growing imports of products with a more carbon-intensive composition. Professor Felbermayr found evidence for carbon leakage most notably in the metal, paper, machinery, transport, chemical and non-mineral metal sector. According to him, one should take three important points into account: (1) indirect exports, (2) higher investments in measuring price-elasticity (creating an elasticity-list or an indicator system) and (3) to analyze the effects in all sectors and not just of carbon-intensive industries. Professor Felbermayr concluded by calling for a member state-by-member state-approach since the various European economies differ strongly. Therefore, he proposed a serious reduction of permits as well as caps with a border adjustment tax.

Tomas Wyns, Doctoral Researcher at the Institute for European Studies, introduced himself by stating that he is tired of talking about carbon leakage. To address this subject is – according to him - like trying to cure a symptom while ignoring the disease. For Mr. Wyns, the disease is the European industrial infrastructure and its competitiveness as well as productivity gap with other countries. Especially, if one compares the European Union with the United States, one will also find a huge research and development gap. Although Europe is still competitive in high-value and innovative material sector, one can notice that other regions are developing much quicker. Wyns, therefore, called for enhancing the general investment climate and promoting innovation across the Euro-pean Union. Consequently, he welcomed the creation of an innovation fund as it will encourage the development and commercialization of innovation in certain sectors. He underlined that this is the biggest existing fund with a special dedication and depicted it as “Europe’s moonshot” for decarbonized and developed technologies. In order to show that the required high technology de-velopments of businesses are possible, he named a few examples of innovative, high technology companies in Europe such as a Dutch company which produces steel with 20% less CO2-production and 20% less energy costs. Wyns concluded that these examples point out how promising the future of the European industry could be.

Hans Bergman, Head of Unit "Benchmarking", DG Climate Action of the European Commission, replaced Vice-President Tajani as the latter had received a last-minute request by the European Parliament. Bergman introduced his opinion by agreeing with Mr. Tajani on the general importance of the carbon leakage list although both do disagree on many details. He, for instance, admitted that the list is a very delicate issue especially when it comes to the 2020 climate goals. Moreover, Mr. Bergman agreed with Mr. Van den Plas on the fact that no evidence has been found in phase I and II of the application of ETS. However, at the same time he stated that the concerns were genuine and free allocations are thus reasonable. According to him, the Commission's task is to look at all different views, to acknowledge them and eventually to find a good compromise. Therefore, it has to consider the industry, consumers as well as the environment. Bergman continued that free allocations are an instrument to conserve what already exists but – in his opinion – it is much more important to support innovations and new technologies. Consequently, he supported the points of Mr. Wyns by calling for more quality and less quantity. He also pointed out the importance of the innovation fund and the huge opportunities it delivers. Mr. Bergman, nevertheless, explained that investors still have problems to place their investments properly and should receive more help. The Commission should also show greater readiness to assume risks and invest money in all those promising projects. Unfortunately, Mr. Bergmann was not able to comment on the new carbon leakage list of the European Commission that was leaked in the morning. 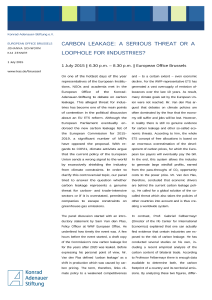 Carbon Leakage_ A serious threat or a loophole for industries? (Pdf) v_1
Herunterladen

Carbon Leakage: A serious threat or a loophole for industries?