Our world has been strongly changed by digitalization and the development of revolutionary new technologies. Social relationships are maintained through the internet, 140 characters messages are spread across the whole world in seconds and new jobs, for instance app-developer or videogames-scriptwriting, have gone from “inconceivable” to “we can´t work without them”.
28. April 2016 Bestellinformationen 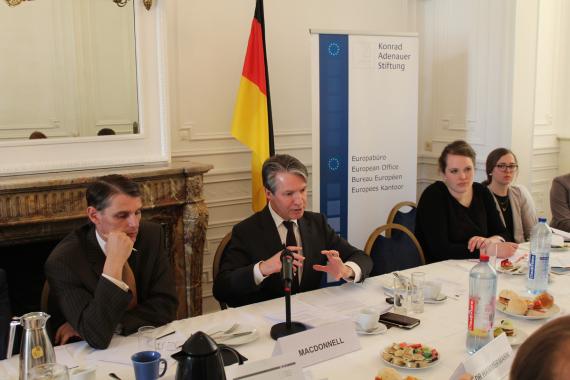 On 21 April 2016, Google and the European Office of the Konrad-Adenauer-Stiftung hosted the third session of their joint workshop series 'Think Digital!'. Under the title "Keeping up with Digitalization – How it transforms our working life and what we need to adjust" the participants discussed the effects of digitalization on businesses and employment as well as several cur-rent problems that need to be considered. The event began with a presentation by Dr Andrea Hammermann (Cologne Institute for Economic Research) who illustrated the results of a recent study on digitalization in Germany. The subsequent panel discussion was moderated by Mr Paul MacDonnell (Head of European Policy, Center for Data Innovation) and included Dr Hammermann as well as Mr Benoit Tabaka (Head of Mobile Economic Policy of Google EMEA), Ms Cecilia Zappalà (Adviser for Digital Economy at BusinessEurope) and Mr Christian Staat (Policy Assistant, cabinet of Günther Oettinger).

Modernization through digitalization and technical innovations is altering our daily life or as Christian Staat described it: “The digital revolution is changing all sectors”. The questions arise: What will the future hold for companies with an increased focus on digitalization? How are the spaces we work in actually transforming?

The future of businesses

The event started with Dr Andrea Hammermann’s case study on digitalization and the effects on the German labour market. She stated that those assessments which point out a loss of work places by the process of digitalization are rather pessimistic and often assume that the industry and the workforces will not adapt. On the contrary, she highlighted that there are no reasonable concerns about negative effects on employment in Germany in the near future. She also added that digitalized companies are better prepared for the years to come, while in general the business world is well aware of the changing environment.

Cecilia Zappalà illustrated the digital transformation within the economy and compared the feasibility of this process in different sectors. According to her, further digitalized companies have an advantage over their rivals. Additionally, she states that the ability to go digital depends on the sector the company is active in (companies in non-productive sectors often have an advantage over the traditional industry). As staff member of a company that is often portrayed as a digital forerunner Benoit Tabaka focused in his speech on the entrepreneurial spirit. He mentioned Google`s '80% - 20% model' as an example to foster creativity and interaction which then leads to a constant advancement of the company and its employees. The concept gives the employees the chance to dedicate 20% of their time to work on a subject they believe to be some kind of beneficial for the organization. Tabaka added that these new approaches allow companies to stay flexible from the inside.

According to Dr Hammermann digitalized companies have an increased need for security that does not end at the boarders of countries. Benoit Tabaka supported this statement and elaborated the point by saying that more autonomy and interactions between companies leads to a larger sum of security challenges that need to be addressed.

Transformation of the working life

The maintenance of jobs is linked to the capability to adapt to change. Dr Hammermann underlined that jobs will not be lost, but that they will change and that digital competences need to increase. She added that soft skills will become more important, such as the ability to learn from one another and to acquire knowledge in new ways. Throughout the discussion multiple forms of learning through interaction were ad-dressed. Working groups with participants of different age groups and training the older generation through a dialogue with the younger generation are just two practical examples. Furthermore, she emphasized that this development of competences needs to be in line with what the companies want to achieve. Benoit Tabaka went on to express his believe that companies have to start to train people to think different from the very moment onwards. He pointed out the need to bring employees closer to new technologies, to help them understand the new processes and evolve a mindset that embraces change.

Working at the European Commission, Christian Staat gave inside into the thoughts and concerns of policy makers regarding the impacts on the future work-force. In relation to a transformation of jobs, he expressed his believe that a plan for the industry needs to address the missing of specialists and the need for a broad set of skills amongst all generations. Especially information and communication technology courses as well as a change in the educational system on university level were suggested ways of preparing employees for their future jobs. Cecilia Zappalà put the expectations into numbers and highlighted the importance of ensuring the right amount of suitable workers at the right moment in time. According to her statement roughly 90% of jobs will require digital skills by the year 2025.

On 19 April 2016 the European Commission launched the Digital Single Market package. It is the first initiative that aims to face the emerging challenges of an increased digitalized industry. Christian Staat referred to the industry package and emphasized the importance of a cooperation between the various national initiatives. Dr Andrea Ham-mermann underlined the necessity of this package and pointed to the possible benefits for the member states of the European Union. The speakers all agreed on a general need for a European regulation. Nevertheless, Cecilia Zappalà noted that in order to enable our potential we have to take measures and make the regulations in digitalization future proof. Furthermore, she expressed the opinion that the responsibility of creating favorable conditions for the workers and the industry lies with the policy makers and their ability to raise awareness for the topic.

Throughout the panel discussion several suggestions on the implementation were presented and one question was answered in multiple ways: What are the difficulties that need to be overcome in the planning and implementation process?

Having first-hand inside in working in a digitalized working environment Benoit Tabaka drew attention to the downsides of fragmentation for the business and the need to facilitate cross-border exchanges. According to him different regulations in different countries bring along additional administrative efforts and expenses that are considered obstacles. The difficulty presents itself in overcoming these barriers. In this respect he mentioned that we are presented with the chance to target, enhance and foster global alliances, if the package of the European Commission consists of the right kind of measures. Cecilia Zappalà rather focused on the steps ahead of the actual implementation. She expressed her believe that impacts need to be assessed initially and men-tioned the importance of the innovation principle. According to this principle, every aspect is assessed by its potential. She took the idea further by stressing the need to find the right balance, and not only focusing on the negative impacts of digitalization. Her overall statement implied that we have to look at the benefits, but also at the downsides. Additionally, she pointed to the responsibility of the policy makers to enable the adaption of new technologies in a suitable way.

Benoit Tabaka and Cecilia Zappalà had a vividly discussion on “data as a currency” and the security challenges that come along. Zappalà elaborated that data is a currency and therefore companies need limits. Related to her earlier statement on the “right balance” she recommended looking at what is not working and improving those gaps. Tabaka however believes that data is not a currency. In his opinion value can only be created by transforming data first into information and than into knowledge.

The dialogue revealed that there are several issues that need clarification before final regulations can be implemented. Benoit Tabaka called the regulations “difficult” and Dr Hammermann pointed out that there is no need to fight the revolution which is doubtfully upon us. Finally, Mr Staat noted that everyone is in the same boat and even without a change in law, digitalization is disrupting the market.

A glimpse of the future

Mr Paul Mac Donnell evaluated the situation as following: “We live in an age of hope and an age of anxiety”. He added that we have to decide whether we would like to go “digital native” or hold it at an arms length. Giving an outlook for further development Zappalà said that if Europe makes the most it could gain a plus of 1.52 trillion Euros by 2025, if Europe misses out on the chance we could face a loss of 6000 million Euros by 2025. She stressed the importance of making sure that the net result at the end of the process will be positive.

It leaves us with the question of how do we want to embrace our future?

As final part of the workshop MacDonnell asked the participants to share their hopes and images of the future. Cecilia Zappalà started by expressing her hope of a development within the next 25 years that brings up leaders who are digital by default. In addition, she is waiting for a change that not only brings a digital economy, but is defined by “digitalization as the one economy”. Be-noit Tabaka went on by mentioning that he awaits a future where digitalization is everywhere, without any separation. He sees a future where we think global and not regional anymore. As a final statement Dr Hammermann talked about her wish to close gaps through digitalization and to connect people all around the world. 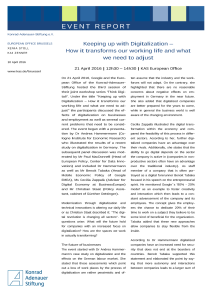