This session was moderated by Hardy Ostry (Head of European Office, KAS) and Stefan Mair (Member of the Executive Board, BDI).
27. März 2017 Bestellinformationen

On 21 March 2017, the 32nd session of the Working Group on International Trade, organized jointly by the European Office of Konrad-Adenauer-Stiftung and the Federal Association of German Industry (BDI) took place. The Working Group on International Trade addresses current issues of trade and investment with significance for the economic future of the European Union and its businesses. With the expertise of our distinguished guest speakers and the discussion among participants our series aims at enriching an open and constructive dialogue among European Institutions as well as other key stakeholders of the European trade and investment community.

The participants of the debate coincided regarding the assessment of the status quo of EU-Russia relations. The participants of the debate agreed that Russia’s current economic problems are not solely triggered by the sanctions of the European Union. Other factors, for instance the oil price and Russia’s protectionist measures, have to be taken into account, too. Russia, which puts far more emphasis on the success of its security policy than on its economic performance, cannot be put under serious pressure by means of economic sanctions.

The working group also provided very revealing contributions concerning a future vision of the economic relations between the European Union and Russia. Our guest speakers expressed the opinion that a change in the operation of the economic relations with the European Union must initially take place within the Russian institutions and society. The European Union will not intervene in Russian internal affairs. However, disagreement existed regarding the possibility of a future dialogue with Russia. On the one hand, the difficult conditions under which the dialogue with Russia takes place were pointed out. It was stated that Brussels had unsuccessfully reached out to Russia in terms of problem solving, which is the reasons why trade disputes are now fought out at the WTO. On the other hand, it was questioned whether European Institutions and organizations of the civil society indeed put enough efforts into the maintenance of the dialogue with their Russian counterparts. To find a suitable mode of communication will be a decisive element for the future of a fruitful economic partnership between Russia and the European Union. 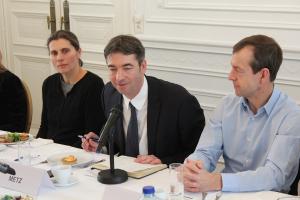 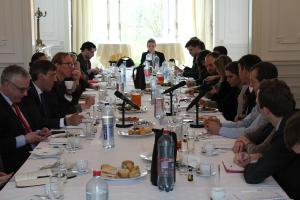