Safe borders for a Secure Europe

On the 15 June 2016, MEP Christian Ehler and the European Office of the Konrad Adenauer Foundation organized a high level panel discussion aiming to portray the opportunities and difficulties of the situation at the European borders. Our panelists were Matthias Ruete (Director General at the European Commission), Klaus Rösler (Director of Frontex), Roderick Parkes (Senior Analyst at EUISS) and Brian Donald (Chief of Staff at Europol).
12. September 2016 Bestellinformationen 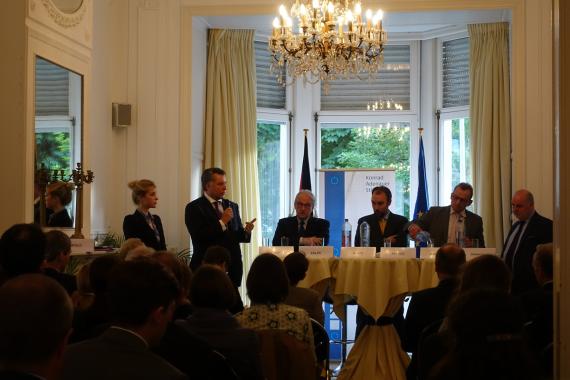 Safe borders for a secure Europe

Today, the EU is confronted with one of the biggest challenges in its young history: a humanitarian crisis triggered by continuous conflicts in the Middle East. As a result, millions of people were forced to leave their homes and flee from war and poverty towards Europe. In 2015 the flows of refugees increased drastically and the situation became even more challenging for the EU. Through the crisis long lasting ques-tions about the political role of the Union were brought up which so far had remained unsolved. The European migration crisis illustrated different understandings of human moral and it can also be seen as a symbol for the lack of missing political coherence within the Union. Moreover, EU benefits like the Schengen Area have become an issue as it enables easy border crossings for refugees as well as economic migrants. In addition to that, many EU neighboring countries began to struggle domestically while trying to control the migration flows and secure the EU borders - causing another matter of concern for the Union. On the 15 June 2016, MEP Christian Ehler and the European Office of the Konrad Adenauer Foundation organized a high level panel discussion aiming to portray the opportunities and difficulties of the situation at the European borders. Our panelists were Matthias Ruete (Director General at the European Commission), Klaus Rösler (Director of Frontex), Roderick Parkes (Senior Analyst at EUISS) and Brian Donald (Chief of Staff at Europol) who presented the work and perspectives of some of the key players of the crisis.

The panel discussion started with an opening statement of Stefan Gehrold, Head of the European office of the Konrad Adenauer Foundation in Brussels. Mr Gehrold pointed out the outrageous amount of political events that have hit Europe in the past year and which the Union will need to solve now. Many of these events were the result of continuous wars in Afghanistan, Iraq and Syria, conflicts which have forced millions of people to leave their countries and set their sight on Europe as their next destination. The uncontrolled flows of migrants, who entered the EU in the past years also led to tensions between EU member states and thus, made it difficult to get ahead with the existing problems. Strengthened by those crises, critics of the European project saw their chance to tear Europe even further apart. Consequently, in many member states populist parties have emerged and used the migration topic effectively as an issue to gain public support. But what exactly is happening at the European borders? Who are the key actors and what is the role of the European institutions?

This and other related questions are continuing to represent a grey zone for many observers and even for EU citizens. In order to shed light into this, Christian Ehler (Member of the European Parliament) and Lea von Martius decided to write about the key players, operations, motives and issues, occurring at the European borders. During a joint event – together with the Konrad Adenauer Foundation – they introduced their publication “Long March for Europe” in Brussels. Their book pays attention to internal and external security problems which the EU currently faces and will have to face in a long-term perspective. “The main goal of the book is to illustrate the work of FRONTEX and the different European institutions” explained Lea von Martius. During the event, representatives of the European institutions, Europol and different organizations presented their work and discussed the struggles they had to face so far.

Dealing efficiently with illegal migration and smugglers was pointed out as major problem from all panelists. As most of the refugees require help on their journey, smugglers see an opportunity to take advantage of the helplessness of these people. Additionally, the uncontrolled border crossings began attracting economic migrants. Politically, the most critical challenge began when Europe became a victim of several terror attacks in 2015 and 2016. Brian Donald (Chief of Staff at Europol) underlined that before the terror attacks in Paris there was a clear separation between terrorism and migration. After these attacks, however, distrust and fear towards refugees has intensified considerably. Mattias Ruete (Director General, DG Home, European Commission) explained that as a result of the terror attacks “we became more con-scious about security implementation and strategies that are not working correctly.” Again, the lacking competencies of the Union as well as the disagreements between member states and the European Institutions were at the heart of the issue. The European Commission decided to implement a system for travel Authorization, attempting to improve the coordination and registration of refugees more effectively. Mr Ruete specified that the EU Electronic System for travel Authorization (ESTA) should be launched in the end of 2016. According to the Commission, ESTA has already been used in Australia and the United States and could be a tremendous benefit for border management during the crisis. The aim of the ESTA system is to keep track of who enters the EU, to limit illegal migration, to provide a coordinated procedure at the European borders and to reduce security risks within Europe. Klaus Rösler introduced the work of FRONTEX, a European Agency which manages the operational cooperation at the external borders of the Union. FRONTEX was established in 2004 as a subsequent of the External Border Practitioners Common Unit. This unit has been created by the European Council on Justice and Home Affairs in 1999 with the aim to establish a stronger cooperation on migration, asylum and security within the EU. During his speech, Mr Rösler elaborated that “FRONTEX core business will be amended”. In particular, this will mean intensification and improvement of joint operations, border controls support, drug detection and risk analysis. Border management means performing controls at the borders, coordinating the incoming flows and fulfilling the required administrative tasks. Together with the implementation of ESTA, FRONTEX will also take care of the education of staff and realization of border management related tasks.

MEP Christian Ehler underlined the role of organizations like FRONTEX and the importance of an improved, coherent approach in the European Union in the migration crisis. “Europol and FRONTEX are at the center to tackle the problem” said the German Member of European Parliament. “The challenge is a combination between internal and external security issues” he continued. External issues involve security risks and an unsuccessful cooperation with courtiers outside the EU. By speaking of internal issues, the Member of European Parliament elaborated that in a time when “more Europe is needed” organizations like FRONTEX - which should fight the crisis - are heavily restrained by their weak competencies. As Europe remained divided about its role, it was impossible to achieve a common decision on how to tackle the crisis best. These fundamental incoherencies were the main reason for migration to become such an extraordinary challenge. Moreover, one can say that the humanitarian crisis confronted the Union with questions about moral, sovereignty and unity which have not been unsolved since the establishment of the European project. Roderick Parkes, Senior Analyst at EUISS, questioned the approach of the EU in the crisis. According to him, it is time to choose new methods in order to solve the crisis. “There are ideas that are an echo of elder liberalization (…) we need to recycle these past policies to be able to offer alternatives.” Parks also mentioned the rapid shift in geopolitics which makes it even more important to secure the European borders. Despite all this, the long lasting call for a stronger cooperation within the European Union has still not led to results. There is no common approach within Europe due to the dominating individual interests of the member states. “The south became a buffer while the stronger countries are only interested in labor” argued Parkes during the debate. Although, the crisis challenges the EU internally, it also led to very close cooperation between the European Commission and European Parliament. In this regard, Parkes men-tioned the hope that the situation could provide the ground for the development of further EU integration.

“Europol was accepted by most of the member states but until now it was kept behind the fence” Brian Dobald, Chief of Staff at Europol, said during the panel discussion in Brussels. During the evening, the different features which would have been necessary in order to tackle the problems effectively were outlined. The panelists called repeatedly for a deeper cooperation between European member states as well as policy makers and for the renewal of the securitization system. “It is important to recognize that the challenges go beyond the borders of the EU” explained MEP Ehler. Therefore, there is an urgent need for political harmonization and thinking beyond the problem he elaborated. Brian Donald claimed that “there is a real problem of info management.” He explained that Europol was and still is restricted in its competencies to address the issues which came up with the migration crisis. Although, Europol receives most relevant information, it is unable to take action due to the lack of authorization. In other words, the interconnectivity between Europol and outer states is functioning correctly, as they receive the data about suspicious individuals, but cannot react according to that information due to national regulations in Europe. The panelists agreed that to get hold of these and other upcoming challenges, all European members will have to be on the same page.

The result of the debate offered new ways of perceiving the problem and illustrated possible problem solving tools. As MEP Ehler mentioned, the migration crisis needs to be recognized as an issue which does not end at the European borders. The cooperation and communication with neighboring states is as important as the communication within the Union. In times of globalization and interconnectivity, a common approach and the inclusion of digital tools would be an advantage. “Migration is an issue that needs to be managed and not a problem that needs to be solved” underlined Klaus Rösler at the end of the debate. “Long March for Europe” also addresses upcoming challenges and opportunities (for example globalization, digital tools and the media). According to von Martius, “the use of communication as a problem solving tool” could be a major benefit in tackling the migration problem. On the one hand, improved communication between the member states could advance the process of addressing the problem. Moreover, a successful communication with other states could help to provide a coordinated procedure with the flows of people who travel to-wards Europe. On the other hand, social media platforms are also often used by smugglers to communicate with refugees. Therefore, it is important to observe communication as a new issue which has become part of the smuggling system. In order to get hold of the situation, the European Union requires coherent policies to block the communication tools of smuggler. Communication is also used by third parties. “This means that improving alliance and strengthening the European institutions is not enough” concluded MEP Christian Ehler. According to him, it will only be possible to get ahead of the problem if the Union achieves to proceed together in a coordinated, strategic way which considers the situation in neighboring countries. To achieve coherence in Europe, a common legal base is needed for all member states. However, the decision for such law enforcement can only be taken by the European member states. 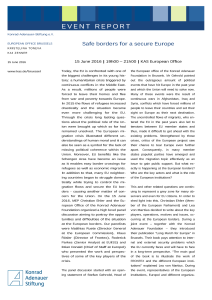 Safe borders for a Secure Europe