The future of EMU - is more fiscal integration really indispensable?

On 20 June 2016, the Cologne Institute for Economic Research and the European Office of the Konrad-Adenauer-Stiftung hosted an expert roundtable to discuss the topic "The future of EMU - is more fiscal integration really indispensable?”.
7. Juli 2016 Bestellinformationen

The current crises have shown that the European Union is not sustainably without fiscal risk sharing. The main aim of the study “On the Future of EMU: Targeted reforms instead of more fiscal integration” published on 20 June 2016 by Jürgen Matthes (Cologne Institute for Economic Research) and Anna Iara (Secretariat-General, European Commission) is to highlight some essential aspects and thus, to generate new impulses within the debate. In their study, the two researches plead for more fiscal integration in the form of a fiscal macroeconomic stabilization mechanism. They argued that the recent crisis was exceptional and was triggered by extraordinary factors (one-off interest rate, large credit boom, global financial crises). The remaining crisis should be tackled with temporary instruments, such as the ECB’s unconventional monetary policy, the EFSI and bad bank solutions.

The panel was joined by Brian Hayes (Member of the European Parliament), Lucio Vinhas de Souza (Team Leader of the Economics Team, EPSC) and Charles de Marcilly (Head of Brussels Office, Robert Schuman Foundation). They all agreed that fiscal integration is indispensable for the long-term viability of the current economic and monetary union.

Hayes pointed out that huge progress has been achieved by closing the big gap which existed between the northern and southern European countries. He proposed that the national governments should look more on their expenditure and not only at the deficit and debts. De Souza supported this view and highlighted the successful reforms made during the financial crisis. Moreover, he proposed to establish a European financial institution. De Marcilly explained that there is a problem with the national governments which should do more to explain their citizens how the EU-reforms are implemented and what benefits they have.

The Future of EMU – Is more fiscal integration really indispensable? 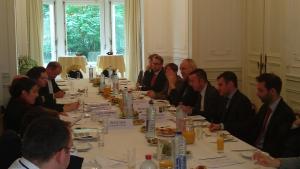 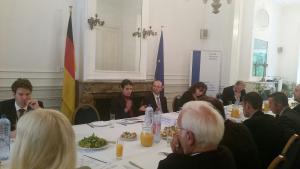