The Post-Bali Agenda of the WTO - What's in for Business?

On July 9th, 2014, the joint BDI/KAS Working Group on International Trade met for their 24th session to debate on the topic: "The Post-Bali agenda of the WTO: What’s in for business?"
26. Juli 2014 Bestellinformationen

In December 2013, the 9th Ministerial Conference of the World Trade Organization that took place in Bali delivered a “package deal” including a substantial agreement on trade facilitation for customs procedures. WTO’s new Director General Roberto Azevedo is now aiming at concluding the Doha Development Agenda (DDA) before the end of next year. Is the WTO back on track to drive global trade liberalization? What can businesses expect from the DDA and what is on the agenda beyond Doha? These and other questions were addressed during the meeting.

The distinguished speakers were Ms. Elena Bryan, Senior Trade Representa-tive at the U.S. Mission to the European Union, and Ms. Ditte Juul-Jorgenson, Head of Unit for Trade and Sustainable Development and Sanitary and Phytosanitary Issues in the European Commission's Directorate-General for Trade.

In her opening statement, Ms. Juul-Jorgensen emphasized the significance of the Bali-Agenda for the entire WTO. She pointed out that there has been a significant change in global trade since 2008. As an example she explained the roles of new “big players” like South Africa and India and the rise of south-south-trade and the increasing influence and power of developing countries.

Elena Bryan said, that it was refreshing for her to talk – for once – about something else than strictly about TTIP, she nevertheless had to come back to TTIP at least during her opening statement. In her opinion, the TTIP should definitely support the multilateral system. Additionally, she emphasized, that the successful implementation of TTIP could be a stepping stone for many other, similar projects in world trade. Both speakers stated the importance of the finalization of the DDA.

In the following discussion, TTIP was still one of the most frequently discussed issues, but the participants focused on TPA and TiSA as well. Regarding TTIP, the members of the discussion had doubts, that an implementation until 2015 could be feasible. Furthermore it was discussed, whether the structure of the WTO had to be amended for the implementation of TTIP. More basic questions, like the benefits of the partnership for the EU were also part of the debate.

Another issue that was of common in-terest was the role of the developing countries. As the negotiations in Bali had shown, the axis of the developing countries was often not as strong as many believe it to be. The participants also discussed the reluctant position of India to the Bali-Agenda and TTIP. For the BDI, as Dr. Stormy-Annika Mildner pointed out, this position was rather “disappointing”. 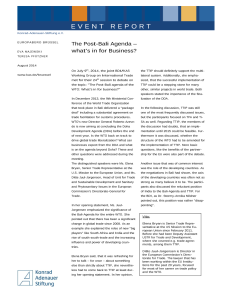 The Post-Bali Agenda of the WTO - What's in for Business? (Pdf)
Herunterladen
Ansprechpartner