Enhancing Investments between India and the European Union

The Case of Bilateral Investments between India and Germany

In recent years, there has been an increase in the number of RTAs and/or FTA. Almost all major member countries of the WTO have notified participation in at least one RTA and some members are signatories of over 20 trade pacts. Between 1948 and 1994, the GATT received 124 notifications of RTAs (related to trade in goods. The WTO allows its member countries to enter into RTAs through which they can trade among themselves using preferential tariffs and opt for easier market access conditions. Over the years, there has been an increase in the amount of global trade through the RTA route.
22. Mai 2014 Bestellinformationen

Studies have examined why countries have diverted their negotiating energies into RTAs or FTAs. The reasons include the slow progress of the WTO talks, snowballing and domino effects as a result of which countries do not want to be left behind and political and strategic reasons. A principal reason for the proliferation of FTAs is the increasing perception that these arrangements promote trade liberalisation among the negotiating partner countries. According to Pal (2008), a developing country is motivated to enter into an FTA with a developed country if its competitors can supply goods to the developed country through a preferential trade agreement. If the developing country cannot form an FTA with the developed country, it attempts to create its own market by signing an RTA with other excluded members. This creates a bandwagon effect where no country wants to be left out of major regional groupings. There has also been a surge in investment agreements due to the WTO’s failure to agree on direct investment issues; several nations have entered in Bilateral Investment Treaties (BITs) or Bilateral investment Promotion Agreements (BIPAs). 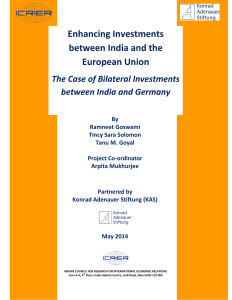 Enhancing Investments between India and the European Union (Pdf)
Herunterladen