As we all know, India will join the G20 Troika this year as it prepares to assume the presidency in 2022. Therefore, there is a strong need for an effective planning and decision making through deep deliberations, discussions and exchange of ideas. These discussions have been extremely successful in providing useful insights prior to the Summits by bringing together eminent researchers, academicians and policymakers to debate on currently relevant topics such as Evaluating Global Financial Architecture and Regulatory Practices, New Issues in Global Trade and Investment, Global Health Concerns, International Cooperation and Role of Technology & Sustainable Development.
12. Oktober 2020 Bestellinformationen

ICRIER organised its 12th Annual International G20 Conference on 5-8th October 2020. It was ICRIER first four-day long G20 conference and due to the current Covid-19 situation, the conference was conducted using online webinar portal Zoom and it was streamed Live on YouTube. The Conference was conducted with support from the Konrad-Adenauer-Stiftung (KAS) International Monetary Fund and the Asian Development Bank Institute (ADBI).

ICRIER has been organising these Annual conferences since 2009, prior to the G20 Summit. The discussions in these Conferences have provided a platform for engaging eminent researchers, academicians and policymakers in rich debate on topics of relevance to the G20 Summit. This year the Conference holds greater importance from an Indian perspective as India will join the G20 Troika this year, as it prepares to assume the presidency in 2022. As a result, a key motivation for this year’s Conference was to contribute to India’s planning and decision making through deep deliberations, discussions and exchange of ideas. Consequently, this year’s conference, had a sharp focus on India’s presidency to chart a course for 2022.

This was reflected in the design of the sessions. This year, panelists under each of the sessions were chosen to reflect on past presidency’s perspective and provide observations from an Indian perspective. Sessions Chairs were chosen to represent International Organisations involved in the G20 process, such as the International Monetary Fund (IMF), the World Trade Organization (WTO), the World Health Organization (WHO) and the Asian Development Bank Institute (ADBI).

Following the theme of the upcoming summit in Riyadh as well as looking ahead at India’s presidency in 2022, the 12th Annual International G20 Conference is centred on the topic, “Protecting Human Lives and Restoring Economic Stability: Views from the G20 Members”. Apart from the Inaugural and the Annual G20 Address, there were four key session, namely - a) Evaluating Global Financial Architecture and Regulatory Practices; b) New Issues in Global Trade and Investment; c) Global Health Concerns, International Cooperation and Role of Technology and d) Sustainable Development.

This year’s Inaugural Session organised on 5th October was the first of its immensity. Introduction to the Conference was delivered by ICRIER Director and Chief Executive, Dr. Rajat Kathuria and Welcome Address was given by Mr. Pramod Bhasin, Chairman, ICRIER. For the first time, ICRIER hosted the current G20 Sherpa H.E. Dr. Fahad Almubarak, G20 Sherpa for the Kingdom of Saudi Arabia along with the Indian Sherpa Shri Suresh Prabhu, during the Inaugural Session. The Indian Sherpa laid out the roadmap for India, focusing on human centric development. The Saudi Sherpa presented the priorities of the Saudi Presidency and the broad outlook for G20 members in the current pandemic situation. Shri Rahul Chhabra, Secretary (Economic Relations), Ministry of External Affairs, Government of India gave a Special Address on the outlook for the Indian Presidency. The Session closed with Vote of Thanks by Mr. Peter Rimmele, Resident Representative to India, Konrad-Adenauer-Stiftung (KAS).

Following the tradition, the first plenary session was aligned to the discussion in the Finance Track of the G20. The Session was schedule on Day 1 of the Conference i.e. 5th October. The Session was centred on the topic, ‘Evaluating Global Financial Architecture and Regulatory Practices – Progress and the Way Forward’ and it was Chaired by Luis Breuer, IMF Senior Resident Representative to India, Nepal, and Bhutan. To present the experience and views from past presidency, the session included presentation by José Siaba Serrate, Chair of the T20 Task Force International Financial Architecture for Stability and Development under Argentine Presidency, Member, Argentine Council of Foreign Relations (CARI). Jay Surti, Deputy Chief of the Global Financial Stability Analysis Division, Monetary and Capital Markets Department, IMF discussed regulatory issues and long-term priorities for international regulations and supervision. Indian experiences and perspective were shared by Alok Sheel, RBI Chair Professor, ICRIER, who, making reference to his experience in the G20, highlighted role of G20’s financial regulatory reform agenda in the past and going forward.

The second plenary session was on the topic, ‘New Issues in Global Trade and Investment - Practices and Reform Suggestions’ and it was scheduled on Day 2 of the Conference, i.e. 6th October. The session was Chaired by Patrick Low, Former Chief Economist and Chief of Staff, WTO. The panelists in the Session were Stormy Mildner, Head of the Department External Economic Policy, Federation of German Industries B20 Sherpa 2017 German G20 Presidency, Peter Draper, Executive Director, Institute for International Trade, University of Adelaide, Australia and Anwarul Hoda, Chair Professor, Trade Policy ad WTO Research Programme, ICRIER. Each of the panelists presented their unique views from the perspective of their engagement/country-experience. Stormy Mildner stressed upon five key trends impacting the current world trade and investment scenario. Peter Draper focused on a wide range of trade restrictive measures undertaken by G20 countries, which seems to be growing much before COVID-19. Anwarul Hoda underlined some prominent issues, which are at the root of trade conflict - industrial subsidies, state-owned enterprises, use of security exceptions for protection of specific industries and infringement of intellectual property rights.

In the wake of the current health crisis, the third session of the Conference was organised on the topic, ‘Global Health Concerns, International Cooperation and Role of Technology’ on 6th October. The Session was Chaired by Manoj Jhalani, WHO Director – Health Systems Development, South-East Asia. The panelists in the Session were Ilona Kickbusch, Chair of the International Advisory Board of the Global Health Centre at the Graduate Institute of International and Development Studies in Geneva, Peter Taylor, Director of Research, Institute of Development Studies and Praveen Gedam, Additional Chief Executive Officer, National Health Authority, Government of India. All the panelists, while discussing initiatives are various levels, also highlighted the role of international cooperation and technology in addressing the crisis and moving forward.

The G20 Annual Address was organised on Day 3 of the Conference, on 7th October. The Address was delivered by Raghuram Govinda Rajan, Katherine Dusak Miller Distinguished Service Professor of Finance at the University of Chicago Booth School of Business. The Session was Chaired by Chetan Ghate Professor, Economics and Planning Unit, Indian Statistical Institute, New Delhi. Dr. Rajan focused on the impact of pandemic on the corporate sector damage. He divided the pandemic and post pandemic period into 4 different phases and discussed each of these phases from the perspective of advanced and developing countries as different treatment is needed for all.

The fourth session of the Conference was organised on Day 4, 8th October. It was centred on the topic, ‘Sustainable Development - Contributions of the G20 to 2030 Agenda’. This Session was Chaired by Nella Hendriyetti, Senior Capacity Building and Training Economist, ADBI and the speakers in the session were Nicholas Stern, IG Patel Professor of Economics and Government, Chairman of Grantham Research Institute on Climate Change and the Environment & Head, India Observatory, LSE; Ajay Mathur, Director General, The Energy and Resource Institute; Amar Bhattacharya, Senior Fellow, Global Economy and Development Program, Brookings Institution and Dennis Görlich, Research Director, Global Solutions Initiative.

The final session of the conference on 8th October was a recurring Session on Views from the Past, Current and Upcoming Presidencies. The Session was Chaired by ICRIER Director and Chief Executive, Dr. Rajat Kathuria and like every year, diplomats from each of the past, present and upcoming Presidency participated in the discussion to share views from their Presidency. To present the experiences from Japanese Presidency, Mr. Shingo Miyamoto, Minister (Economic and Development), Embassy of Japan participated in the Session and discussed the Japanese priorities and outcomes. H.E. Dr. Saud Mohammed Alsati, Ambassador of Saudi Arabia to India presented the views of the current Saudi Presidency, highlighting the priorities and the areas of focus. The views from the upcoming, Italian Presidency were discussed by H.E. Vincenzo de Luca, Ambassador of Italy to India, outlining the areas of importance for the Presidency.

Closing remarks and a conference summary was presented by Dr. Rajat Kathuria, Director and Chief Executive, ICRIER. He concluded the conference by thanking the funders, the panelists and speakers the conference team and all the attendees and participants.

Please visit the conference website for all full videos of the discussions at www.icrier.org/G20/2020. 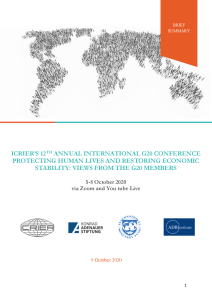