Is the Kingdom of Cambodia a rule of law country? How much and what kind of rule of law does Cambodia need in the 21st century? What kind of it will the society be able to put in place? What is the rule of law anyway and is it indispensable? Is the rule of law a Western model that might need adaptation elsewhere? These are some of the questions addressed in this fifth edition of the Konrad-Adenauer-Stiftung Occasional Papers on Democratic Development.
10. Juni 2009 Bestellinformationen

This volume suggests that there seems to be a consensus in Cambodia that the rule of law is a desirable principle. None of the authors questions its universality. It is claimed that proper implementation of the rule of law promotes economic development. The rule of law is described as a goal of the country’s development policy. Economic growth, political modernization, the protection of human rights, and other worthy objectives are believed to hinge, at least in part, on the rule of law.

However, the debate about the rule of law in the Kingdom of Cambodia is full of controversies. Is the rule of law presently applied or not applied? Some authors express satisfaction with the successes achieved in establishing it after decades without or only weak rule of law. Others complain about serious deficiencies and even allege the powerful to lack interest in introducing the rule of law.

With these papers, we do not intend to provide an academic legal textbook. Rather we want to compile personal statements of outstanding Cambodian personalities on the difficult concept of the rule of law in Cambodia. We would like to contribute to a pluralistic debate on what we consider a central concept for the future of the Cambodian society. We are convinced that the Cambodian society would benefit from more rule of law in the future.

The final chapter is the only one written by a Non-Cambodian. Thus, his contribution has a different objective. It is not an expression of personal views on the rule of law in Cambodia. Rather more, the author provides an overview of the academic debate about the term “rule of law”. We assume, that this contribution will put into perspective the controversies raised by the other authors. It is well understood that neither the author nor the Konrad-Adenauer-Stiftung do not wish to be and cannot be “referees” over any opinion put forward in this book. The Cambodians must come to terms with the rule of law for themselves.

In this volume, some of the most brilliant personalities of Cambodia put forward their ideas. All of them are important opinion leaders. We would be satisfied if we had achieved our objective of contributing to a free, balanced and pluralistic debate and indirectly to improvements in establishing the rule of law.

On behalf of the Konrad-Adenauer-Stiftung, I thank all contributors to this volume. As a foreign institution, we are highly honored by the trust all authors have invested in our foundation in addressing this difficult and controversial issue. We have tried to invite a broad spectrum of personalities and institutions to contribute to this volume. If some feel that the spectrum of opinions is not properly covered, another volume on this topic might be justified.

I also like to express my gratitude to Mr. Wolfgang Meyer, who as the former Representative of the Konrad-Adenauer-Stiftung has initiated and prepared this volume. Without his support, these exceptional debates of this most sensible topic had not been possible. 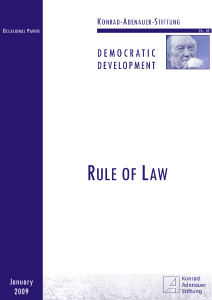