Effective but difficult. Can the German model be an example for Europe?

Europe would be in a much better economic condition today if all its member states had fared as well as Germany.

Does that mean that the FRG’s economic model should be seen as the example to follow? There is some evidence

that the markets for capital, jobs, skills, and also the reformed social policy could be interesting points

of reference, even if many of them are deeply rooted in German culture. Much less convincing is the German

growth model, which is too dependent on exports and generates dangerous external imbalances.

Sebastian Płóciennik (born 1973), researcher and lecturer at the faculty of the Institute of International

Studies, University of Wroclaw. He specialises in institutional economics and German economic

development, and is the author of dozens of publications on European and economic policies of the 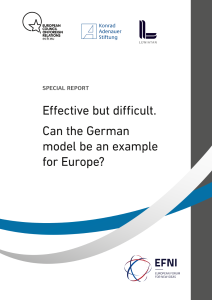 Effective but difficult. Can the German model be an example for Europe? (Pdf)
Herunterladen