Rosemary Amana, 25, a refugee from South Sudan witnessed horrific cases of violence against women as they fled to Uganda after the outbreak of civil war in South Sudan.
23. Juli 2018 Bestellinformationen

“The soldiers either rape or kill you,” she recounts. “Many women were raped and others killed. I lost my cousin sister. Her death was horrible. She was heavily pregnant. They raped her and then cut her belly open and removed the baby. They put the baby on her chest and both mother and baby were left to die.”

Rosemary managed to reach the Uganda border, with nothing however. “Life was not easy. We came with nothing, not even utensils,” she says. However, she did not choose to wallow in despair and self-pity. She did not want to sit and lament over her situation. She set up a business, which is making her less dependent on, say, food rations supplied by the UN and other humanitarian agencies operating in the settlement.

“I came with 50,000 shillings, part of which I used to buy chickens. The chickens laid eggs and hatched many chicks which I sold and started my business,” she says. Amana sells small fish, onions and other vegetables, sugar, biscuits, soap, cigarettes and household items. “For the 25 kilograms of sugar that I buy at 75,000 shillings, I make a profit of 10,000 shillings in three weeks. I also sell other items, of course. My business is now worth 280,000 shillings and if it was not for using part of the profit to buy food, my business would be bigger.”

In the same settlement is Margaret Kangaze, also a refugee from South Sudan. In her household is her daughter, two sisters and a diabetic husband whom she takes care of. It is a female-headed household. She runs a small stall selling sugar and household items. “In a day, I make sales worth 40,000 shillings. In two or three weeks, I make a profit of 15,000 shillings on sugar alone,” says Kangaze.

Amana and Kangaze are case examples of surviving the mayhem. They are women who, despite facing adversity, have picked up the pieces of their lives and decided to build something – not something for themselves alone but their entire households. Both women have set up businesses in Bidibidi Refugee Settlement. They have not let misery and the immense difficulties of being a refugee define their lives.

There are no universal formulae, but here we list 10 practical ways for refugee women to outlive the conflict, build peace and knit better lives while living as refugees:

1. Take courage. “Do not allow the difficulties you have gone through define you,” advises Amana. “Take courage, you should survive the hard circumstances.”

2. Pray and trust in God. Author Khaled Hosseini asked Hassan, a Syrian refugee in Jordan, how he would survive without cash assistance amidst many basic needs. Hassan answered, “God is here.” It is important to believe and trust in God.

3. Watch your back. Settlements and camps being communities of people from various backgrounds, are bound to have people with unbecoming behaviour. Cases of violence are likely to happen. It is important that you take precautions. If possible, avoid walking alone at night, for example.

4. Seek help. There are information and response centres in camps or settlements with professionals to handle your situation. Do not suffer in silence; silence may be your biggest enemy.

5. Avoid crime. Endeavour to be law-abiding. Try not to find yourself on the wrong side of the law. This is especially important for urban refugees where a lot goes on in the city, and some activities may be good to indulge in but not necessarily legal.

6. Look for employment or work. Uganda has favourable refugee laws and policies that allow refugees to work. If you know English, for example, you can work as a translator/interpreter in the community. Do not be consumed with self-pity or lament the loss of lives and property you may have suffered in your country of origin or as you trekked to the host community, but find something that will give you an income.

7. Enrol for study. In Uganda you can study when you are a refugee. Among other opportunities, you can take advantage of the refugee scholarships. It is important you learn a skill.

8. Ensure unity in the home. You may want to avoid family break-ups. If you found yourself in the host community with some family members, relatives or friends, it is advisable that you keep those relationships for support and defence, among other purposes.

10. Make peace. This is especially important in case your eviction from your homeland was due to a civil war and you find yourself in a host community with members of a community/tribe on the opposite side of the conflict. Remember you are all in a foreign land so never attempt to revenge but make peace with everyone. It is also important that you make peace with yourself. Do not blame yourself for, say, lost children, or a lost husband/wife. 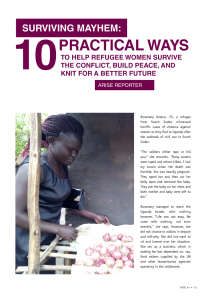