COMMENTARY REFUGEES ARE HUMAN NOT A BURDEN

Uganda has been commended internationally for hosting thousands of refugees from neighbouring countries.Today, the majority of refugees in Uganda come from South Sudan, at 73%, and the DRC, at about 19% ofthe total number of refugees. The remaining percentage consists of Burundians, Somalis and others. As atJanuary 2018, the total number of refugees in the country was 1,411,794. The Government of Uganda hasalso announced that it “is considering a request” from Israel to relocate at least 500 African refugees, mostlyEritreans and Sudanese, from Israel to Uganda.
23. Juli 2018 Bestellinformationen

Apart from a fairly open refugee welcoming environment, Uganda’s refugee law and refugee management practice are also lauded as being progressive and refugee-friendly. This does not mean that they are perfect and there are still opportunities to make the refugee environment better in terms of legal/policy frameworks and practice. However, improving the refugee management system should not be difficult in a country where there is a reasonable amount of goodwill towards refugees and where a lot has already been done to provide them with space, protection and assistance at standards that are above those of many other countries.

In 2015, in a report entitled “South Sudanese refugees in Adjumani District, Uganda: Telling a new story?” the International Refugee Rights Initiative noted: “While Uganda law recognises that refugees should have freedom of movement, it states that this will be subject to reasonable restrictions. In practice, this means that refugees are required to obtain permission before they are allowed to move outside of the camps. While in practice this requirement is not always enforced and refugees are able to move around with relative freedom, the law should be reformed to no longer require the obtaining of permits, thereby guaranteeing the right of freedom of movement in both law and practice.”

In addition to the requirement that refugees possess movement permits, freedom of movement is also subtly and indirectly curtailed by providing humanitarian assistance only in refugee settlements. Besides, by maintaining people in camps, their right to work is also curtailed as there are very few job opportunities in camps.

Today there are reports of violations of basic refugee rights in Uganda. Refugees are human beings with rights, including the right to food. However, reports from some refugee camps seem to suggest that some officials distribute food to refugees in exchange for sex, while others, exploiting the vulnerability of refugees, are involved in trafficking them. There are also allegations that some refugees have to give money in order to be accepted officially as refugees and to get a refugee identity card. More allegations indicate that some refugees have been locked up in police cells simply because they have fought for their rights. There are also many refugees who have been denied employment because of sheer ignorance by employers that refugees in Uganda are entitled to work. In addition, because of the ignorance surrounding refugee rights, some employers have entrenched the practice of underpaying refugees because they consider it a great service and a favour to employ them.

Apart from the right to remain in Uganda as a refugee and not to be subjected to refoulement, the rights of a refugee in Uganda, enshrined in Article 29 of the Refugee Act, include being issued with an identity card (free of charge); entitlement to fair and just treatment without discrimination; property rights; the right to transfer assets to or from Uganda; freedom from discrimination of any sort; the right to education other than elementary education; recognition of foreign certificates, diplomas and degrees; the right to engage in agriculture, industry, handicrafts and commerce; the right to establish commercial and industrial companies; the right to practice one’s profession (if the qualifications are recognised by Ugandan authorities); and the right to have access to employment opportunities and engage in gainful employment.

Refugees are entitled to having the same rights as citizens with respect to practising their religion and to the religious education of their children. They also have the right of association as regards non-political and non-profit-making associations and trade unions; and free access to courts of law, including legal assistance; and they are entitled to protection regarding intellectual property rights.

These are legal instruments that guarantee the rights of refugees. Any practices to the contrary are not only unacceptable but illegal. It is important, however, to emphasise that Uganda is not the only country where the rights of refugees are violated by ignorant officials and xenophobic citizens, among others. Refugees and human rights campaigners fight for refugee rights all over the world. Indeed, away from the scandals currently embroiling the country’s refugee humanitarian assistance system, Uganda is a fairly safe haven for refugees. Current global reports on refugees contain sad revelations. Discrimination and sexual abuse, for example among Syrian refugees and Myanmar’s Rohingya Muslim refugees, make unpalatable international news headlines despite the fact that there are international (and national) refugee protection frameworks and instruments in place.

Conventional thinking believes that massive numbers of refugees are “a burden” on resources and it is recognised that at the onset of a massive refugee crisis, a refugee influx into a country can cause significant overload on a country’s resources, social services and infrastructure. However, refugees cannot be a burden if the refugee management system is based on the empowerment of refugees to take responsibility for their own livelihoods, at least partially, if they wish to do so and not focused on refugee “care-and-maintenance” programmes which pay no attention to refugee empowerment. It is a fact that in protracted situations where the planned response focuses on the development of both refugees and host communities in an environment that is supportive of refugee rights, it would be far-fetched to consider refugees as a burden.

David Kigozi is the programme manager, Sudan, at the International Refugee Rights Initiative. He has worked in senior international roles with various civil society and humanitarian agencies in the Great Lakes Region for over 15 years. 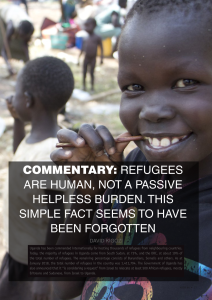 COMMENTARY REFUGEES ARE HUMAN NOT A BURDEN (Pdf)
Herunterladen