The 2016 Refugees Welcome Index, the first ever such index, showed several variances. Refugees Welcome Index measured levels of acceptance for refugees for the very first time. The index was based on a global survey commissioned by Amnesty International carried out by strategy consultancy firm, GlobeScan.
23. Juli 2018 Bestellinformationen

The Refugees Welcome Index was prepared by asking 27,000 people in 27 countries three questions:

Should people be able to take refuge in other countries to escape from war or persecution? This sought to get people’s views on access to asylum.

Overall, slightly more women than men (74% vs 72%) agreed that people should be able to take refuge in other countries to escape from war or persecution.

How closely would you personally accept people fleeing war or persecution (refugees) in your home, neighbourhood, city/town/village or country, or would you refuse them entry to the country altogether?

Should your government do more to help refugees fleeing war or persecution?

Across the globe, 66% say their governments should do more to help refugees. Agreement is highest in China (86%), Nigeria (85%) and Jordan (84%) and Germany (76%) – two of the countries that already welcomed huge numbers of refugees – but is particularly low in Russia (26%) and Thailand (29%).

Agreement also increases with income (64% amongst lower-income respondents vs 70% for those with a very high income).

Men are slightly more likely than women (31% vs 29%) to disagree that their government should do more to help refugees fleeing war or persecution.

“We did not expect to see such strong levels of solidarity with refugees, but the results reflect the inspiring human compassion people feel to those fleeing war,” said Amnesty International Secretary General, Salil Shetty. “They want to do what they can to help, not turn their backs. People seem to be more committed to principles set down in international law than many of their governments, who are increasingly tearing up or ignoring commitments that have stood for 65 years.”

“We designed the survey and index to reflect the complexity of the refugee issue. People are grappling with multiple political and emotional arguments and we wanted to get their views as humans responding to a humanitarian crisis,” said Caroline Holme, Director at GlobeScan. 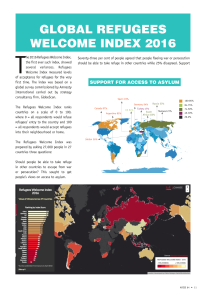